Why complementarians think women pastors are a gospel issue

UPDATE: Less than an hour after this posted, I was asked to resign as a book editor with TGC due to my criticizing TGC leaders who link the gospel with complementarianism, which is not directly critiqued below.

The recent kerfuffle surrounding Saddleback Church ordaining three women pastors has once again uncovered the unhealth of American evangelicalism. We see people on Twitter and Facebook at their best and worst when the subject is complementarianism.

For example, one person comments that Saddleback had become “an apostate synagogue of Satan.” Another declared “This isn’t a church in God’s eyes if they have women pastors.” 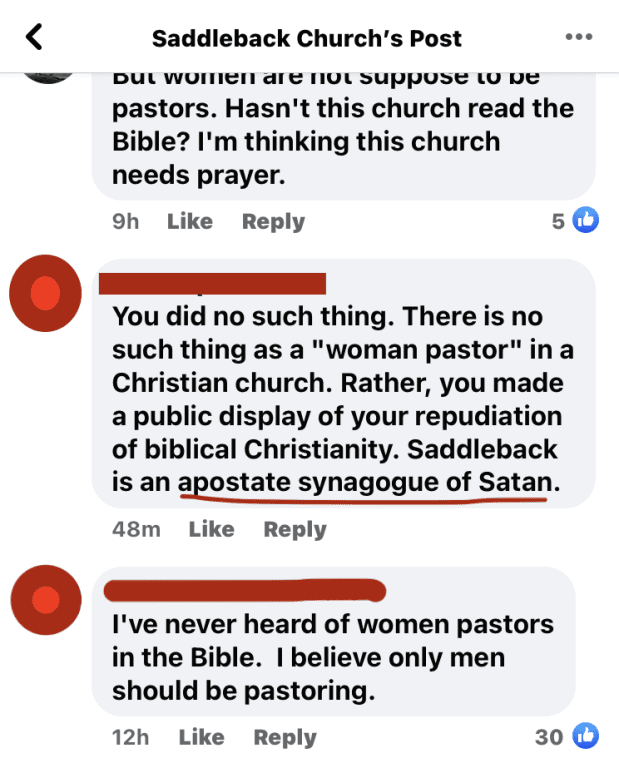 The more one reads, you see how much emotion is wrapped up in the debate. It’s easy enough to discern why egalitarians get fired up about the topic since they feel it unjust not to allow women the opportunity to pastor churches.

But I’ve wondered why complementarians respond with such vitriol. After all, from a complementarian viewpoint, whether women can be pastors is not a gospel issue… or is it?

A Link Between Complementarianism to the Gospel?

I then stumbled upon a clip of D.A. Carson, Tim Keller, and John Piper explaining why The Gospel Coalition (TGC) includes complementarianism as a tenant within the TGC’s Faith Statement. In other words, these men see it as more closely linked to the gospel than various other matters, e.g., baptism, predestination, etc.

Keller opens by saying that the women-in-ministry issue is not directly related to the gospel on the basis that he would not raise the topic when doing evangelism. We could certainly dispute whether “what we say in evangelism” sufficiently marks what is “directly” related to the gospel. After all, Paul in Galatians 3:8 explicitly equates the gospel with the Abrahamic covenant, yet how often do people preach Genesis 12:3 when evangelizing? Other texts explicitly emphasize the point that the gospel proclaims Jesus as the promised Son of David (Romans 1:3; 2 Tim 2:8; Acts 13:32-34).

Without question, these ideas are directly related to the gospel, even if they are not always addressed when doing evangelism.

Unfortunately, Piper seems in fact to link complementarianism with salvation. In an interview, he says,

“This complementarian role of man and woman in marriage is deep, historical, biblical, beautiful, satisfying, and in harmony with our true nature. Therefore, it will not go away. It is too profound, too integral with both nature and grace, both creation and salvation. That’s reason number one that it won’t fade away.”

Complementarianism makes claims about the male-female relationship both inside the church and within marriage. While Piper specifies the latter, many people will wonder whether he also connects the former with salvation.

Similarly, in the 1995 edition of Women in the Church, Andreas Kostenberger argues that complementarianism is needed for “a world estranged from God” to “believe that God was in Christ reconciling the world to himself” (pp. 11-12).

Building a Church on Slippery Slopes

Simply saying that complementarianism is only “indirectly” related to the gospel does not mean that you believe or communicate that statement. Perhaps, one reason for the venom spewed on Saddleback by many complementarians is the way that evangelical leaders speak about the topic (as illustrated already above).

“Many people, in order to make room for an egalitarian position, have to do something with the way in which they read Scripture that, … I would put it this way, it loosens your understanding of how you understand the force of Scriptural teaching…” (1:53-2:08)

Piper agrees when he speaks about those who interpret 1 Timothy and Ephesians 5 different from TGC.

In effect, their elevating complementarian doctrine as they do is an example of doing slippery slope theology. They resist evangelical egalitarians because of what that view might lead to. In truth, they disagree with some ways that people have arrived at an egalitarian position, but not everyone gets to that position the same way!

“There’s a number of things in our statements… that aren’t directly involved with the heart of what it means to teach the gospel, but we think are entailments. They are associated with people who believe in gospel doctrine rather than direct causes [to believing the gospel].” (2:19-40)

We should be people who seek to know biblical truth and let the chips fall where they may, not theologize out of fear about how someone might then misinterpret some other topic. Why should we accept or reject an idea simply because of who it’s associated with? We trust the Bible––not a person. People can be wrong!

Several things are breathtaking about this as well as deeply discouraging. And I say this with grief as someone who has been a Southern Baptist (until recently) and thus a complementarian shaped by these men in incalculable ways.

I don’t think these men consciously regard complementarianism as a first-order issue. Al Mohler is correct when he says,

“I don’t know of any responsible theologian who has ever claimed it is a first-order issue. It’s a second-order issue. That is to say, it is not a doctrine that has to be affirmed for one to come to a saving knowledge of the Lord Jesus Christ. It is not a doctrine absolutely essential throughout the history of the Christian Church to defining where you have the true church and where you find the false church.”

But Mohler’s response, like others, is tone-deaf in that it misses the thrust of Beth Moore’s concern.

“Let me be blunt. When you functionally treat complementarianism–– a doctrine of MAN–– as if it belongs among the matters of first importance, yea, as a litmus test for where one stands on inerrancy and authority of Scripture, you are the ones who have misused Scripture. You went too far.”

If you think this is an exaggeration, hear how Carson critiques egalitarians.

“We’re often using hermeneutics today as a way of sidestepping what Scripture unambiguously, repeatedly, and clearly says by trying to locate the rationale in some alleged reconstruction of the background of 1 Timothy or whatever it is instead of listening to what the Scripture actually says in its own terms…. It’s finally not listening to what God says to these people, “Will I look at those of a contrite spirit and who tremble at my word?”

This does not feel like trembling at the Word of God. It feels like ways of domesticating it, and that on the long haul has massive repercussions down the road. I think it’s that serious.” (11:04–11:47)

Carson’s statement well illustrates the central concern behind Moore’s remark. First, he accuses people who read the text differently of “sidestepping” or “domesticating” the Bible, of not having “a contrite heart,” nor trembling at God’s word. Second, he confuses his theology with “what the Bible unambiguously, repeatedly, and clearly says” as though countless Christ-loving scholars don’t and couldn’t honestly disagree with him.

These comments lack any semblance of humility.

(As an aside, Carson’s double appeal to his feelings certainly raises eyebrows. His disregard for historical reconstruction in favor of his feelings is not a laudable approach to theologizing.)

The fact that this debate has gone on for so long and the scholarly works so vast is evidence enough that passages like 1 Timothy 2 are anything but “obvious.” Likewise, the fact that church leaders across 2000 years haven’t agreed on a common rationale for excluding women from the pastorate (as shown by Beth Allison Barr) also testifies that Christians have not thought such passages are “unambiguous” and “clear.”

Finally, Piper explains why complementarianism was put into TGC’s Faith Statement (whereas a position on believers versus infant baptism is not). He says,

“The Gospel Coalition wants to say things that protect the gospel, puts safeguards around it. This [complementarianism] is one of them.”

One can only imagine how preaching complementarianism safeguards the gospel. How can TGC say that affirming male-only elders protects the gospel but then remain silent on baptism or, for that matter, predestination? Arguably, the logic and exegesis involved in those two topics undoubtedly have “entailments” that speak about who is a Christian and who is not. Isn’t baptism symbolic of those who belong to God’s people?

In the end, Piper’s final comments might reveal more of what drives his and others’ thinking. He warns,

“If you aren’t willing to stand against the tide on this issue, you’re probably going to cave on some other important ones that may be closer to the gospel. There is an issue of the kind of person who is willing to take the hits, I mean, to be called obscene, to be called a sexist who doesn’t give a rip about justice for women… Can you stand in those, return good for evil, and keep giving a positive vision to your church?” (10:17–46)

There is much vehemence in the way some speak about complementarianism. Perhaps it is fueled as much by a desire to appear strong and tough (stereotypical masculine qualities) than by the strength of one’s exegetical arguments. This is a serious point. Might we forsake humility because we’re trying to prove ourselves rather than improve ourselves?

I’ll close with a penetrating comment by a friend of mine who said,

At some point, “we do it because it’s biblical” becomes, unconsciously, “it must be biblical, because we do it.” I don’t think we interrogate that seam diligently enough.

This post has not presented a case for either complementarianism or egalitarianism. Rather, it calls for humility and honesty for all engaged in the conversation, because unity IS a gospel issue.

This post underscores our need to change how we engage controversial issues. For related articles, see my series on Winsome Conviction.

May 11, 2021
The Ministry of Women in the Chinese Church
Next Post