Paul Defends the Status of Women in 1 Corinthians 11

While people debate 1 Corinthians 11, all recognize that honor and shame play a critical role in its interpretation its message to men and women. My previous post showed one such proposal by Cindy Westfall. In this post, I put forth another suggestion by Lucy Peppiatt.

I find parts of each argument compelling, so I emailed them both to ask if it’s possible to reconcile their views. Appreciative of the other, both women agreed on at least one thing: their interpretations cannot be reconciled. :(

Peppiatt contends that Paul uses this rhetorical device in 1 Corinthians 11, such that the indented verses and italicized words below (in blue) represent the Corinthians’ ideas, not Paul’s.

2 Now I praise you because you remember me in everything and hold firmly to the traditions, just as I delivered them to you. 3 But I want you to understand that Christ is the head of every man, and the man is the head of a woman, and God is the head of Christ.

7 For a man ought not to have his head covered, since he is the image and glory of God; but the woman is the glory of man. 8 For man does not originate from woman, but woman from man; 9 for indeed man was not created for the woman’s sake, but woman for the man’s sake. 10 Therefore the woman ought to have a symbol of authority on her head, because of the angels.

13 Judge for yourselves: is it proper for a woman to pray to God with her head uncovered?

16 But if one is inclined to be contentious, we have no other practice, nor have the churches of God.

It’s laughable to think I can explain her entire interpretation in a single post, so I will merely attempt to capture a few of her central claims. She makes her case most fully in Women and Worship at Corinth, simplified for a popular audience in Unveiling Paul’s Women. 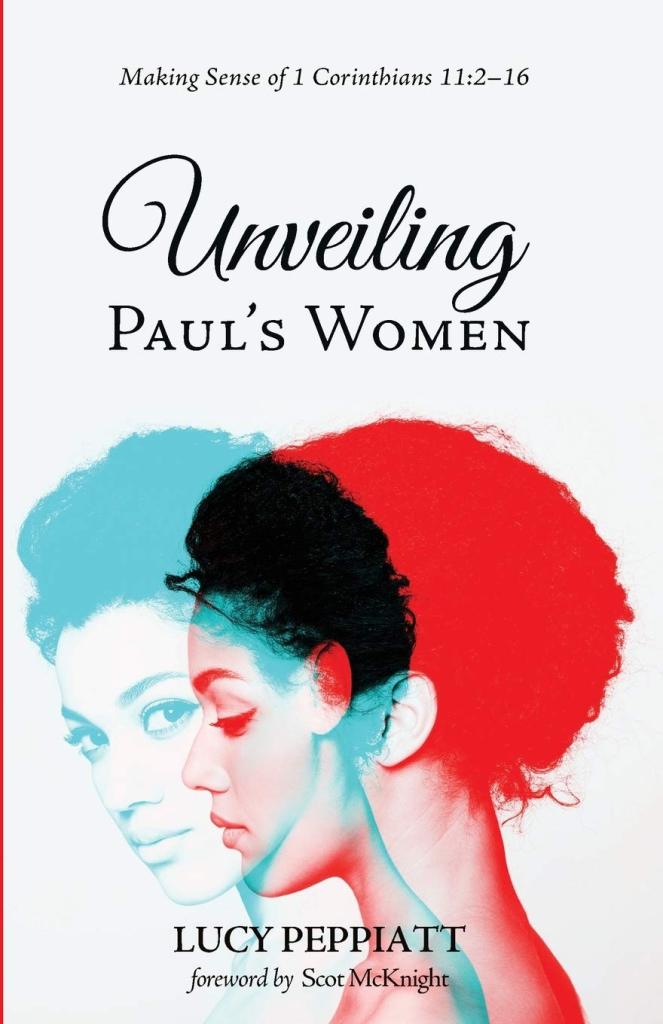 Whereas Westfall says Paul wants the men to allow women to wear veils (for reasons of honor), Peppiatt claims that Paul argues the opposite, namely, that women should not be forced to wear veils, which the Corinthians men think symbolize women’s inferior status. Westfall offers a “cultural reading” whereby Paul addresses a cultural value. By contrast, Peppiatt thinks Paul makes a theological argument, evidenced by his exchange in 11:7-12 with the Corinthians.

For Peppiatt, 11:7-10 are especially significant because they give a clear rationale concerning the head covering. The reason given to us and it’s not cultural; it’s rooted in creation/cosmology.

(Remember, it doesn’t matter what we think about veils today. What matters is their meaning to Paul and his readers.)

As previously noted, some people looked down on women who did not wear veils. However, the problem is that ancient Greco-Roman views on veiling are so diverse as to make it near impossible to know what precisely Paul addresses. Ancient ideas about veiling varied according to status, location, culture, and time period.

The Logic of Paul’s Argument

In broad strokes, here is Paul’s argument as Peppiatt sees it.

In 11:2-3, Paul commends the Corinthians’ desire to hold firmly to his teaching yet wants to correct their misunderstanding of that teaching. They mistake his comments about headship (v. 2) to imply vv. 4-5. Accordingly, the men use veiling to signify the subordination of women and their (supposedly) higher status before God, which they base on a flawed view of Genesis (cited in 11:7-10).

Agreeing with Chrysostom, Peppiatt says 11:6 is a reductio ad absurdum, a type of argument where Paul shows the absurdity of their thinking by highlighting its logical implication. The severity of the penalty mentioned in v. 6 also suggests that Paul is not dealing with a cultural issue but a theological one. This conclusion is reinforced by 11:7-10, 16.

Peppiatt’s reading reconciles the apparent contradiction between 11:7-10 and 11:11-12. The critical transition word in v. 11 (πλήν) signals Paul’s differing perspective. She translates πλήν with a gloss “The point is….” Paul’s “in the Lord” language further contrasts their errant reading of Genesis. In short, he underscores man and woman’s interdependence (not hierarchy) undermines any claim to prominence based on origin.

The stress on origin further supports the view that headship in 11:3 relates to a source (Peppiatt) or kinship (Westfall). As many scholars note, the “head” signified status and prominence, but not necessarily authority. Metaphors have several potential connotations, but their meaning is always bound by context. Peppiatt argues,

She quotes Cyril of Alexandria when writing,

“Thus we say that the kephale of every man is Christ, because he was excellently made through him. And the kephale of woman is man, because she was taken from his flesh. Likewise, the kephale of Christ is God, because He is from Him according to nature.” According to Cyril, kephale is used in three similar but different ways, all denoting origin and relation. (p. 91)

Moreover, Peppiatt suggests that 1 Corinthians 12, the immediate context of 1 Cor 11, helps us understand the import of kephale (i.e., head language). She says,

The rhetorical question in 11:13 calls on readers to agree that “Yes, it is proper for a woman to pray to God with her head uncovered.” Verses 14-15 reinforce this conclusion. Paul even appeals to their own reasoning (note the italics in v. 14, quoting the Corinthians). Paul exposes a contradiction in their own thinking. In effect, he says something like this:

You guys recognize that long hair acts like a covering (11:4, 14), which is why you think men are dishonorable with long hair. However, you don’t apply this same logic to women. The woman’s glorious hair serves as a cover, yet you, Corinthians, want her to cover that glory.

This response resembles the ironic logic of 11:6. Accordingly, by their reasoning, a woman who only has her hair (without a veil) should “have her hair cut off,” which would be a disgrace. Thus, showing her glory is reckoned disgraceful!

This is how twisted the Corinthians are in their thinking!

Finally, 11:16 supports the claim that Paul is not making a cultural argument since he says that all the churches align with the practice he advocates in the passage.

In both Westfall and Peppiatt’s views, honor plays a vital role in interpreting 1 Corinthians 11. Their readings differ, yet both have strengths. And both raise more questions, although I think their interpretations are far more coherent than most conventional readings.

If you want to do your own deep dive, here are the places for you to go:

In addition, both have several talks online and are interviewed on multiple podcasts.

Let me know what you think. What questions do these posts raise for you?

May 31, 2022 The IMB and SBC must lose face to give God face
Recent Comments
0 | Leave a Comment
Browse Our Archives
Related posts from Jackson Wu