Last Thursday at the National Press Club, I was fortunate to witness a blessed gathering of faith leaders.

Ostensibly a book launch for Mr. President: Interfaith Perspectives on the Historic Presidency of Barack Obama, the event was a celebration of and reflection on what Obama’s presidency meant to progressive, and mostly black, faith leaders.

The organizers and participants were generally aware of, but not at all bound by, the careful yet blasé ecumenism required when discussing religion in official Washington. They went ahead and had church, right on the 13th floor of one of D.C.’s signature institutions.

A frequent commentator on Mr. Obama’s presidency, especially as it engaged religious issues, I am largely indifferent to the man. I have never met him, and I have no overwhelming fondness for him. He is, to me, just another American president: a good man, a great man in his own way, but categorically like the rest who come and go. I voted for him, the first time, but I was never captivated by him. And even as I have witnessed what I believe to be good decisions and moments of strong leadership, I have been at least as aware of what I consider Obama’s failures and shortcomings in office.

Of course, I am aware of the Obama fan club, people who can’t help but admire and praise the man: Partisan Democrats, ethnic minority citizens, progressive faith leaders, and many among my friends and family. But last week I beheld firsthand a feeling that went far beyond mere fondness or admiration.

These faith leaders displayed a passionate appreciation for Obama, and they will sorely miss him.

Dr. Renee Allen served as Mistress of Ceremonies. “I’m sure all of remember that glorious day when we found out he would be our next president, this magnificent gentleman,” Allen said. I vaguely remembered struggling to stay awake to watch Obama’s victory speech on Election Night. It was striking to be in a room full of people for whom that night was in some ways the culmination of a lifetime of hopes, work, and prayers.

Melissa Rogers, Special Assistant to the President and Executive Director of the White House Office of Faith-based and Neighborhood Partnerships brought greetings and thanks on behalf of the president. “He has been buoyed by your prayers,” she said. “You have been essential partners on a wide range of issues. The president understands that faith is something personal, but also something public, something we do together to improve our nation. He believes we have been coworkers in God’s service. Our work has made a real difference in people’s lives: jobs, housing, nutrition, health care, refuge from violence, a second chance for returned prisoners. You have helped us bring about greater justice under law and aspired to equal justice for all people. You have helped us to ensure equal rights to religious freedom for all people.

Rev. Darryl Sims who compiled dozens of essays from contributors with co-editor Barbara Williams-Skinner, discussed how the book came together in a very short time. He also presented a copy for Melissa Rogers to personally deliver to the president.

Dr. Barbara Skinner-Williams prayed about the project daily for a month before finally taking it on. “People are going to tear him down and undo many of the great things he has done,” she reminded the audience. “You were doing work for justice before Obama. You are going to be doing it after Obama.”

Skinner-Williams then led a discussion about Obama’s faith legacy with the Reverend Dr. Jim Forbes, Pastor Emeritus of The Riverside Church in New York, and the Reverend Jim Wallis, president and founder of Sojourners. She noted that she wished Obama’s more recent statements about poverty and racism had been a larger part of his platform eight years ago. Indeed, several speakers alluded to moments of dissatisfaction with the president. But this was a celebration, and in any case all participants were strong supporters of the president and will be defenders and guardians of his legacy.

The Rev. Dr. Forbes discussed racism, commending Vincent Harding’s 1996 book Martin Luther King: An Inconvenient Hero. Forbes said he is grateful that a rising generation of activists is not content to say, “Let’s get together and hold hands.” He reminded us that Harding was King’s speechwriter when he delivered his famous April 4, 1967 sermon at Riverside, one year to the day before he was assassinated in Memphis. “King didn’t die in 1963 with that dream,” Forbes intoned, “but they did kill him.” America, Forbes said, “talked about holding hands and the dream, but did not radically reorient its national values.” King, after all, warned that without a transformation of structure, racism, materialism, and militarism would undo this nation. Recalling that he had spoken in Boston earlier in the night that Obama gave his famous DNC speech, Forbes said, “Obama is special to me.” Instead of staying in the hall, Forbes watched Obama’s speech from his hotel room, overcome with the young senator’s eloquence and grace in giving voice to what Forbes had cared about for so long. Forbes then offered his hope that this new book and Obama’s post-presidency might revive the more radical parts of King’s legacy.Wallis, who wrote the Foreword, said that the book is designed to shape the conversation against some of the other books that will be coming out. “Think of all the things that have been said against the first black president: the ugly words, the indignities, one after another.” After the election, Wallis noted, “we heard tremendous fear all across this nation from vulnerable people who had been targeted, threatened by this new president-elect.”

The Press Club event continued with reflective and heartfelt discussions about how the Obama Presidency has been historically, spiritually, and psychologically significant for people of faith, particularly nonwhites. The celebration ended with a charge to persistently work toward enacting and preserving the legacy of President Barack Obama.This was an event unlike any I have seen in Washington, and it was an honor to take part.
Previous Post 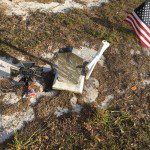 December 29, 2016
Visiting a cemetery in the Old South
Next Post

Why are so many Christians such...
John Shore
Related posts from Capitol and Cathedral