I’ve been reading about your plight in the New York Times.  So let’s go ahead and clear something up right now:  Most Catholics don’t give a rip who it is you’re not having sex with.

We know that abstinence is hard.  Those of us practicing NFP probably don’t have a ton of sympathy for you, because at least you aren’t obliged to spend all night lying in bed next to the person you’re not having sex with, but when we can get over ourselves, sure, we get it.  Boy do we get it: Abstinence is hard.

Also, when you took your vows, the whole “celibacy” thing wasn’t exactly foisted on you by surprise.  That’s kinda been around for a while.

Sooo . . . I’m sorry you had a difficult childhood.  I’m sorry your seminary sucked, and your bishop sucks, and I’m especially sorry that priests who want to be faithful to their vows get shafted.

But I have good news for you: There are other Catholics who want to be faithful to our vows — whether that be the vows of ordination, or marriage, or baptism, we’re all in this together.  We’ve all made the commitment to do our best to order our actions to our state in life, and no you are not the only one who faces fierce temptations to act on urges that are not consistent with our human dignity.

So if you want support in keeping your vows, we’re out here.

Very few of us are going to be clutching our pearls at much of anything, though probably if bestiality is your thing then maybe keep that to yourself and stay away from pet shelters, and just talk about “unwanted temptations” in a general kinda way, thanks.  But same sex attraction?   Yawn.

Those of us doing the Catholic thing know very well what it’s like to wrestle with temptation.  Honestly we don’t give a crap about your tormented coming-out story, because we know it’s a distraction.  Satan wants to keep you constantly looking inward, gazing at your story of shame and pity, because then you’ll forget that shame and pity aren’t the end of your story.  You’ll forget the whole reason you’re Catholic: Because you are much more than the sum of your sins.

You are made for eternal glory.  God who loves you wants you in Heaven forever with Him, and so do all sane men.

You could be a Catholic with a particular set of God-given strengths and weaknesses, graces and temptations.  You’re already a priest, so you don’t even have to guess what your vocation is: It’s already there, part of you, permanent and unshakable.

You are not a mistake.  Your priesthood is not a mistake.  What would be a mistake?  Thinking that because of this or that life circumstance you aren’t able to live up to your God-given calling.  If God has called you to celibacy, that is right where He wants you.

I know it’s a struggle.  I know this because everyone struggles with their vocations.  That’s how life is.  Come struggle with us.

Like what you read here?  Find more at jenniferfitz.com. 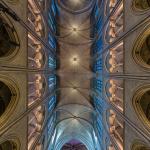