What to Call the So-Called New Calvinists?

My friend, Bob Robinson, has made a good case for seeing the New Calvinists as Neo-Puritans. I don’t think we can know this for sure, but it is indeed possible that on this blog that group was first called the Neo-Reformed, but a commenter said they are not really Reformed since they are mostly Baptists and not officially connected with the Reformed denominations. Then another friend said you can’t call them Neo-Calvinists since that’s Kuyper.

Neo-Puritan is a good moniker, but that might work even better for the likes of J.I. Packer. So maybe “neo-reformed” with a lower case R? Anyway, Bob Robinson makes the case for Neo-Puritan and I have reposted this with his permission.

What do you think? Perhaps you are tempted to say “no labels,” but that is not the reality in which we live. Ordered existence is the instinct for all of us, and this is about making sense not “othering.” Here’s Bob Robinson’s case:

So What’s Wrong with Neo-Calvinism?

In response to the rise of the new Calvinists, we need to make sure we know who we are talking about.

For the past five years, there has been a lot of discussion about the rise of a new group of Calvinists. Groups like The Gospel Coalition are encouraging and celebrating how a new generation of believers seem to be embracing Reformed theology. In a recent lecture at the bastion of “Old Calvinism,” Westminster Seminary, John Piper defined the New Calvinism.

The Missional movement, which is largely Arminian, has also criticized the New Calvinism.

Scot McKnight is a former professor of mine at TEDS while I was also studying under one of the key leaders of the New Calvinism, Don Carson. Scot has written some scathing critiques of the New Calvinism’s insistence that the Gospel must be defined primarily by the salvation of individuals.

“Theyíve been called the young, restless, and reformed or neo-Calvinists, and they are highly mobilized and increasingly influential. Their books perform well in the marketplace (see John Piper or Paul David Tripp), their leaders pepper the lists of the most popular Christian bloggers (see The Gospel Coalition and Resurgence), and theyíve created vibrant training grounds for raising new recruits (see Reformed Theological Seminary, Westminster Theological Seminary, and The Southern Baptist Theological Seminary).

This brand of Calvinists are a force with which to reckon. But as with any movement, America’s Calvinist revival is a mixed bag from where I sit, there are several troubling trends that must be addressed if this faithful faction hopes to move from a niche Christian cadre to a sustainable and more mainstream movement.

Notice that Merritt called them the young, restless, and reformed orneo-Calvinists.

The young, restless, and reformed refers to the best-selling book written by Collin Hansen, Editorial Director for The Gospel Coalition and is a good identifying tag for this group.

But what are we to make of this identification of them as neo-Calvinists?

Well, that is a misnomer. What Merritt and others are addressing is not Neo-Calvinism, but Neo-Puritanism.

I think these New Calvinists should not be called “Neo-Calvinists,” but rather “Neo-Puritans.”

Back in 2009, I wrote a series of posts at my blog Vanguard Church on the nuanced differences between Neo-Puritanism and Neo-Calvinism.

Scot McKnight picked up on this terminology as he has interacted with people over the years. In a comment on a blog post by David Fitch in which Fitch was critiquing New Calvinist Mark Driscoll, Scot wrote,

“A former student of mine, Bob Robinson, told me a few years back that he had read a careful church historian who thought NeoPuritanism was more accurate. Jamie Smith also pushed back against using the term Reformed for this group; Vince Bacote thinks NeoCalvinist is not fair to Kuyper; Ken Stewart’s book proved to me again the Reformed movement is too big for this new development of mostly Baptist Calvinists.

So there is some protection of terms here and I have now myself landed on NeoPuritan as the heart of this movement. Puritanism is, of course, personal zeal before the Lord for holiness and, also, zeal for reforming church and society according to biblical (and not ecclesiastical) teachings. So I agree, we should probably start using NeoPuritan.”

It seems high-time to make clear the difference between Neo-Calvinism and Neo-Puritanism again.

Why? Because, first, with all the hoopla over the new Calvinism, people need to understand that the terms Calvinist or Reformed are much broader terms than any one particular group within the movement. Second, because with all the notoriety the new Calvinism is getting, especially in contrast to Old Calvinism and Arminianism, we need to make it clear that there is another group of Calvinists, a group that has called themselves Neo-Calvinist for 100 years, and has also gained some prominence in North America recently. This group has similarities to the other group, but there are some marked distinctions.

What Merritt (and others commenting on the recent surge of Calvinism) are talking about is what we should call Neo-Puritanism.

Now hear me carefully: I don’t use the term Puritan in any derogatory manner. When this term is used, some hear puritanical, with all the caricatures of staunch religious strictness. That is not what I’m referring to.

Neo-Puritanism is a resurgence of the ideas of John Owen, Richard Baxter, and of course Jonathan Edwards (John Piper’s favorite, and now the favorite of many who enjoy Piper’s enthusiastic writings).

Neo-Puritanism appropriately enlarges our view of God’s authority and thus our view of evangelism, worship, and the church’s role in society. It is very concerned with theological issues like the reality of sin and its destruction in both individuals and society, Penal Substitutionary Atonement and Justification as the means for individuals to be saved, and the Five Points (TULIP) of Calvinism.

It is very active in the religious cultural clashes in todayís American society, especially the issues of gay marriage and abortion. Neo-Puritanism sees the answer to societyís woes as starting with personal piety and then it moves out toward society, seeking to influence the culture to live by the pious standards in which Christians live.

But this is not Neo-Calvinism, so for Merritt and others to call it that only confuses matters.

The Emphases of Neo-Calvinism

Neo-Calvinism dates all the way back to Abraham Kuyper, the 19th Century Dutch cultural leader who famously said, ìThere is not a square inch in the whole domain of human existence over which Christ, who is sovereign over all, does not cry, Mine!

Grace restoring natureî is the central insight of Neo-Calvinism. The gospel message for this group is best summarized by four chapters Creation, Fall, Redemption, and Consummation.

This is where neo-Calvinists differentiate themselves from the Neo-Puritans.

They insist that there has not been enough attention paid on the first and last chapter. Acknowledging that the cross is the climax of Redemptionís story, neo-Calvinists insist that focusing just on Fall and Redemption (i.e., personal sin and salvation) neglects the deep implications of the cross to the cosmic story of Godís redemptive plan.

While both Neo-Calvinism and Neo-Puritanism are both concerned about personal piety and cultural influence, they come at these things from different angles. Neo-Puritanism focuses on the sovereignty of God in salvation. Neo-Calvinism focuses on the sovereignty of God over creation. Their Calvinism has a changing the world comprehensiveness, seeing that the implications of the redemption found in Christ infiltrates all spheres of society so that the ultimate end of God’s plan is the restoration of His creation.

Ray Pennings, Executive Vice President of the Neo-Calvinist think tank Cardus, wrote an excellent piece entitled, Can we hope for a neocalvinist-neopuritan dialogue?: Forging a public theology relevant for our times. In that article, he offered this insightful nuance:

I recently asked Ray Pennings to expand on the important distinctives of Neo-Calvinism. He told me,

ìNeo-Calvinism doesnít neatly fit into the emerging ëold ñ newí Calvinist paradigm. Hence, I find the Neo-Puritanism / Neo-Calvinism distinction to be more helpful. There is a profound difference in their approach to the gospel. Neo-Puritans focus on the personal nature of salvation and see the church as primarily a salvation-factory, the workshop of the Holy Spirit in which the Word is sovereignly applied to the hearts of the totally depraved and they are brought into a vital relationship with God. The meaning of this for the rest of life is understood to be secondary and a by-product of a faithful life which has the church and the covenant community as its primary focus.

Neo-Calvinists on the other hand, focus on the church as the recharging station for the people of God and focus on the work of the spirit taking the witness of Godís people into their everyday lives. In practical terms, preaching and church life focuses on equipping the people of God for their comprehensive callings.

Now, I must emphasize that these are two streams of Calvinism, so there is certainly overlap. Tim Keller, who leans toward Neo-Calvinism is one of the leaders of the Neo-Puritan group The Gospel Coalition. While The Gospel Coalition has become much more vocal about a Neo-Puritan agenda, they have also just launched a new section of its website on Faith and Work (appropriately called “Every Square Inch,” the famous quote from Abraham Kuyper). On the other hand, a prominent neo-Calvinist college ministry conference, Jubilee, not only addresses the complexities of vocation as ministry with speakers like Andy Crouch and Anthony Bradley, but also proclaims the means of salvation from speakers like Tullian Tchividjian (who had a blog at The Gospel Coalition until recently).

As Ray Pennings told me,

As with any bi-modal contrast, the differences here are highlighted in a way that might obscure the fact that many would reject these labels as reinforcing an either-or approach when a both-and is more appropriate. Nonetheless, any careful observer of the church and cultural life of those associated with these different groups should recognize that this debate has real every-day consequences. The character of preaching, the priorities in personal and church life, and the engagement with society and culture does look different depending on how one approaches these issues, making “Neo-Puritanism” and “Neo-Calvinism” descriptive terms that should be used in a helpful way to understand the contemporary Reformed and Presbyterian scene.”

Click on the image below for a link to a pdf chart that sums up what these nuances look like by providing representative examples. 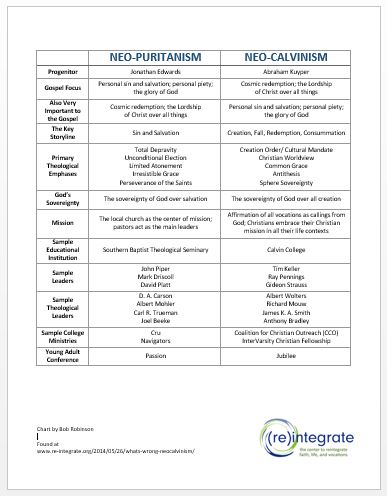 Bob Robinson is the Executive Director of The Center to Reintegrate Faith, Life, and Vocations. Bob is also a Content Editor for The High Calling. Read Bob’s articles in the (re)integrate online magazine, follow Reintegrate’s tweets at @re_integrate and Bob’s personal twitter at @Bob_Robinson_re.