The Apocalyptic Paul — His Biography 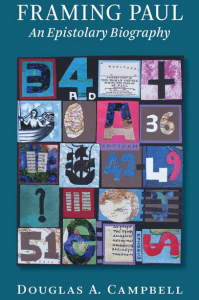 Douglas Campbell has become a major player in the world of Pauline studies with his last two books in this sense: he has not only proven his competence in exegesis, theology and history but has proposed a re-centering of Pauline theology around the theme of apocalyptic. (Some have said Barth’s had his share of influence, too, but that influence has been mediated as much through Torrance.)  His first foray into this approach was called The Quest for Paul’s Gospel: A Suggested Strategy, while his second was a mammoth volume: The Deliverance of God: An Apocalyptic Rereading of Justification in Paul.

Penetrating the whole of his project is a chronological ordering of the Pauline letters in a biography based on the evidence in the Pauline letters (read: genuine Pauline letters, and he’s not a skeptic on this one). The title is: Framing Paul: An Epistolary Biography. Notice the method: if the standard method is to conflate Acts with Paul’s letters, leading Campbell to say Acts has the upper hand far too often, his approach — which revives the work of John Knox and then takes it to a new level — is to base everything on the Pauline evidence for Paul was a firsthand witness!

Every competent discussion of Pauline chronology and biography entails intense discussion of passages and cannot be reduced to simple summaries, but Campbell does us all a great service by outlining his conclusions at the end and I will now post them with this warning: each line (and other lines not here mentioned) requires intense and careful study, and he’s done that.

Prior to 34 ce: Previous life as a Pharisee

Persecution of the early church in Jerusalem
Early/mid-34: Apostolic commission near Damascus
Early 34-mid-36: Activity in the region of Damascus
Activity in “Arabia”
Return to Damascus
Late 36: Escape from Damascus, from a governor appointed by King Aretas IV
Pauls first visit to Jerusalem, 2.x years after commission
Activity in Syria and Cilicia presumably begins

37-38: Probable activity in Syria and Cilicia, including in Antioch
(Late 39/early 40): Announcement of Gaian plan to desecrate the Jerusalem temple

Ca. 43-49: Years of shadow: extensive travel
Mission to Illyricum
Mission to Galatia (the most plausible location currently)
Possible missions to Moesia, Thrace, Bithynia, Pontus, and Cappadocia
Sufferings from travel (shipwrecks) and disciplinary measures (whippings and beatings with rods)
Paul’s second visit to Corinth (during or adjacent to this period)

Mid-50: Return to the Aegean by way of Antioch and Galatia
Mission to Asia:
Imprisonment en route, possibly in Apamea
Founding of congregation at Colossae by proxy
Laodiceans (“Ephesians”) / Colossians / Philemon
Release from prison; visits to Lycus valley communities
Founding visit to Ephesus

Apollos s second visit to Corinth
Super-apostles’ visit to Corinth (if they are different from the foregoing)
Titus’s first visit to Corinth, with instructions to rendezvous with Paul in Macedonia or northern Asia
Asian crisis, probably in Ephesus (2 Cor 1:8-10)
Paul’s departure from Ephesus for Troas and then Macedonia

Spring 52: Romans
Paul’s departure with the collection for his third visit to Jerusalem, via Macedonia, and presumably also Asia — ultimately bound for Rome