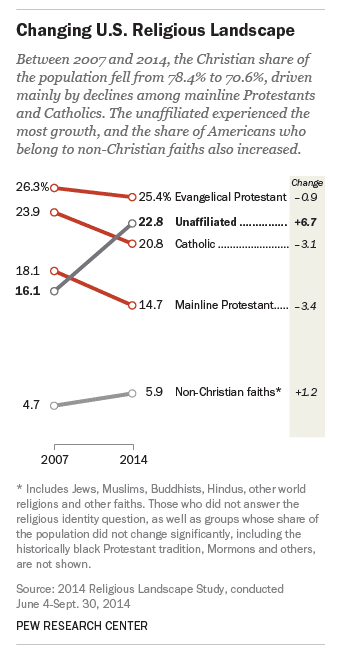 To be sure, the United States remains home to more Christians than any other country in the world, and a large majority of Americans – roughly seven-in-ten – continue to identify with some branch of the Christian faith.1 But the major new survey of more than 35,000 Americans by the Pew Research Center finds that the percentage of adults (ages 18 and older) who describe themselves as Christians has dropped by nearly eight percentage points in just seven years, from 78.4% in an equally massive Pew Research survey in 2007 to 70.6% in 2014. Over the same period, the percentage of Americans who are religiously unaffiliated – describing themselves as atheist, agnostic or “nothing in particular” – has jumped more than six points, from 16.1% to 22.8%. And the share of Americans who identify with non-Christian faiths also has inched up, rising 1.2 percentage points, from 4.7% in 2007 to 5.9% in 2014. Growth has been especially great among Muslims and Hindus, albeit from a very low base.

The drop in the Christian share of the population has been driven mainly by declines among mainline Protestants and Catholics. Each of those large religious traditions has shrunk by approximately three percentage points since 2007. The evangelical Protestant share of the U.S. population also has dipped, but at a slower rate, falling by about one percentage point since 2007.2

Even as their numbers decline, American Christians – like the U.S. population as a whole – are becoming more racially and ethnically diverse. Non-Hispanic whites now account for smaller shares of evangelical Protestants, mainline Protestants and Catholics than they did seven years earlier, while Hispanics have grown as a share of all three religious groups. Racial and ethnic minorities now make up 41% of Catholics (up from 35% in 2007), 24% of evangelical Protestants (up from 19%) and 14% of mainline Protestants (up from 9%).

Ed Stetzer’s conclusions, that the rise of the Nones reflects a switch from Nominal to None rather than substantive decrease, as well as his view that Convictional Christians remain committed, are reasonable conclusions from this sort of evidence.

Yet, we must keep in mind the fundamental studies of the Baylor University as well as the important research of Christian Smith (and his team of researches) and Bradley Wright — that the numbers are not to be explained in apocalyptic terms.

What this study will do is give certain kinds of progressives and secularists another study to tell their story that religion is decreasing that the Nones are the future of American religion. That story is as mistaken as it is attractive. The numbers continue to show that 70% of Americans claim to be Christians.

May 14, 2015 In Defense of Andy
Recent Comments
6 Comments | Leave a Comment
"'This renewal began first with the renewal of the people of God (chapter 5 or ..."
Kostya2 Putting the Bible Together
"In Christ, there is no Jew or Greek, male or female."
Silverwolf13 Go Home or At Home?
"I just started to read about Scot Mcknight! His arguments are good.However, I recommend Scot ..."
Yechan Namgoong Tim Keller under the Eye
"" if it be Your will" 1 John 4:14,15 says, 14And this is the confidence ..."
disqus_5T2jXBEN10 JesusCreed.org Blog Prayer
Browse Our Archives
Related posts from Jesus Creed