By Donald Nwankwo, newly ordained Deacon in the Anglican Church.

“I don’t live by faith. I live smart,” I overheard someone say in a group conversation. I recently heard someone else comment on a TV show: “I wonder why Christians choose to live by a book written thousands of years ago. They need to get real with the times!” Have you come to wonder why, in some circles, a scientist’s professional commentary might be suspect simply on grounds of having a vibrant faith life? In a world that is increasingly reinforcing the necessity for intellectuality and reason (which is good!) there seems to be this subtle, but growing, tendency to view faith and religious belief as incongruous with intellectuality and objectivity.

So many people who hold to biblical convictions and the exercise of faith in God, but who also care about reason and rational judgment, can sometimes feel  this covert social pressure to cross back and forth an imaginary bridge between a ‘realistic world’ and a ‘religious faith world’. They are invariably asking questions like, “How can I practice faith without seeming unintelligent to the onlooker?” Else, they are wondering how best to get the critic to understand, in some logic commonly accessible to both them and the critic, what and why they believe.

This might only get worse in some societies, not because faith is unintelligent, but because more and more people know less and less about religion, and how matters of faith cohere with practical life. There have been times when critics of the Christian faith had some idea of religion and so could critique what they, at least, knew some of. A different generation of critics has emerged – people who dislike religious faith from the outside, but actually know little about the spiritual life, not even from a general standpoint.  Said differently, more and more people may now lack the right kinds of mental tools to generally reason through matters of faith.

When something does not make sense to any person, there are at least two possibilities. One, the logic of that concept, per se, may just lack rational consistency and coherence. In this case, it is a problem with the concept itself. Or else, the person critiquing may not actually have enough of the necessary background awareness to grasp (or follow) the logic within the realities of the very concept they are questioning. In this case the problem is with the inquisitor and their methodologies.

This is not to say that the logic of any religious belief is correct as far as they have a premise and can posit some inferences. That would be religious pluralism. [Reason itself has already determined that two variant viewpoints cannot be both correct]. But it is to say that when people have some repository of awareness of the premises of the spiritual life combined with the broad knack for analytical objectivity, then they have better footing to effectively employ their reasoning within the framework of the subject matter. So when the reasonability of faith practice comes under question within the broader society, we need to step back (as a person of faith) and ask: “Is it a problem with the internal logic of my faith as I believe it, or a problem with the other’s attempt to grasp that logic but without any background mental references?”

Let’s picture an investor in the stock market. Imagine also that he moves into a community where people know mostly of hard currency and physical markets, but very little about stocks. His neighbor considers this stock investor unreasonable: “After all, stock is not real money,” he argues, “since they are intangible and do not stand up to the primary tests by which we tell what counts for money/legal tender. You cannot walk into Walgreen’s, hand them your dividend slip and walk away with a gallon of milk.” In this sense, it does not stand to the ‘test’ of money as a tangible/physical medium of exchange in the same way as coins and bank notes do. But the investor is busy working out how much money they might lose bypassing a promising stock deal given all the strong market trends and indications. To subject stocks to the physical test of legal tender (money) is to miss the point. In fact, it demands so little of stocks in light of what they stand represent in the bigger world of the financial market. To the neighbors, the stock guy is foolish to trust all those numbers that seemingly exist only on a bunch of paper. However, that is really not as a result of the internal incoherency of the workings of stocks, but only because in this case, his community members lack the mental tools to grasp the logic of stocks within the bigger framework of the money market.

But in any case, this imaginary stock investor still lives with their predicament in their environment. They hate being perceived foolish by the non-believers (in stocks) around them. However on the other hand, they also understand how foolish it is to turn around and disbelieve what they have come to know and experience of stocks.

That, right there, is what I refer to as the paradox of faith (socially speaking). In the face of apparent foolishness of faith, the one who has truly experienced God in the life of faith knows how unreasonable it is not to believe. Back to Scriptures, almost every person of faith I have read about in Scripture was a clear thinker. After all, their narratives are replete with chronicles of people wrestling through matters of faith, options, considerations and choices. If they wrestled, they could not have been thoughtless. And all too often, those narratives unfold a realization of the sensibleness of believing and acting accordingly, at times equally portrayed by the eventual demonstration of the folly of their (or others’) choice to disbelieve.

The question is not whether believing is reasonable, but whether we keep our spiritual sensibilities vibrant so as to reasonably believe. To do this, the Scriptures and the prayerful study of them (and within a worshiping community of fellow believers) are indispensable. 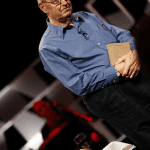 May 29, 2015 Willard and a Gentle Apologetics
Recent Comments
5 Comments | Leave a Comment
Browse Our Archives
Related posts from Jesus Creed

Evangelical
Apologetics in a Bible of Paradox
Jesus Creed

Evangelical
Willard and the Problem of Evil
Jesus Creed