A New Exodus Out of the American Church (by Jeff Cook) 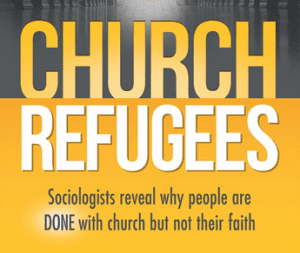 Few books have disturbed me as much as Josh Packard’s Church Refugees: Sociologists Reveal Why People are Done with Church but not with Their Faith.

Many of us have become familiar with the “Nones” (those who select “none” when asked their religious afflation) and their increase over the past 20 years. Packard describes a different, trending phenomenon: “The Dones”, those who have decided “their spiritual lives are better off lived outside organized religion.”

Packard unveils what many of us in Churchworld have been experiencing as a trickle for years: the most committed church attenders—those who have consistently given, prayed longest, served for years, and have been in the most important meetings—are the ones leaving our churches. After a year of qualitative research, Packard concludes that the Dones are not leaving because they no longer believe in God; the Dones uniformly report that they are leaving church to save their faith.

This is an important new observation. The Dones are not the free-riders. They are the folks who showed up every week and gave regularly, and they are not leaving because of the apparent dominance of conservative theology or well-publicized sex scandals. Rather, Packard summarizes, “the story of the dechurched is a story of modern religious organizations and institutions stifling people’s ability to engage with each other and their community.”

This is no small observation. Where analyzing the Nones is like looking at a severe burn that on the surface looks bad but over time may heal, identifying the Dones is akin to a diagnosis of cancer. Some of the people most essential for the church’s lasting health are the ones exiting and the reasons documented would require major systemic change.

So why are the Dones leaving? Some of the answers would take significant time to unpack, but in short:

Note, Packard is not a progressive commentator. Packard is a sociologist presenting data from interviews. He is not advancing his own gripes about church life (he presently attends and is active in a church). Instead, his book outlines what those who have already left say about why they left and why they are not likely to return. (For a sample of what the Dones are saying consider his @DechurchAmericatwitter feed.)

As a practitioner, this is the most challenging book I’ve read in some time and churches like mine—what may be termed emerging churches—are not immune. Normally when reading books on the failures of Churchword, I am part of the critics circle, but not here. Packard puts his finger on spots my church and most of those I know deeply struggle.

So let’s talk. Is this a problem? Is the phenomenon of the Dones normal and expected or something that is deeply concerning?

Jeff Cook teaches philosophy at the University of Northern Colorado. He is the author of Everything New: Reimagining Heaven and Hell (Subversive 2012), and a pastor of Atlas Church in Greeley, Colorado. You can connect with him at everythingnew.org and @jeffvcook.