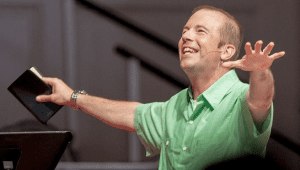 In a previous post I observed that Paul’s letters were not read by individuals but performed by a reader (or lector). The lector didn’t read a letter of Paul cold on the spot but instead would have been given instructions (by Paul and his co-workers). In fact, it would not have been unusual for the lectors to have prepared and performed the letter in advance — or a number of times, perhaps rehearsing the letter’s performance a few times. None of this, of course, is discussed by Paul in his letters but he does mention couriers and reading (e.g., Rom 16; Col 4).

Though this helps explain Lucy Peppiatt’s theory about 1 Corinthians 11:2-16, the post today is about performance in the world of Paul and is based on the excellent sketch of memorized speech-making by William D. Shiell, in a book called Delivering from Memory: The Effect of Performance on the Early Christian Audience (Eugene: Pickwick, 2011). Shiell is the senior pastor at First Baptist Church Tallahassee. His work is rooted in the excellent work on rhetoric by George A. Kennedy.

Some are calling this “performance criticism,” and perhaps America’s best-known expert is David Rhoads. The facts/details about performance are based on ancient rhetorical handbooks. I don’t know anyone who thinks Paul was trained as a rhetor or a lector, but the reality is that most in the Roman and Jewish worlds would have experienced trained rhetors on a common basis — the public square. Thus, those who “read” Paul’s letters aloud would have “performed” them on the basis of experiencing other lectors/rhetors. None of this stretches evidence and is therefore valuable for learning to “hear” Paul’s letters as they were meant to be heard for he wrote them to be read in the congregation’s public gatherings (Col 4:16).

To quote Shiell, “In Hellenistic Jewish and Greco-Roman audiences, the performer and the audience were shaped together by the recitation [or reading], retention, and response to the performance” (7). Furthermore, “Prior to performance, the reader practices, remembers, retains, and paraphrases the reading” (8). [Is it possible that what we now know as text-critical variants began at the original performance?]

What are the characteristics of delivery/performance in the ancient world?

The Body: gestures were learned and mastered; the face correlated with the text; the voice was used to communicate the emotions (pity, indignation, envy, and zeal/emulation).

Performing Various Elements in a Text: lists were exploited by order and emphasis, riddles were used to create liveliness, surprise and delight; fables or parables; and visualization enables listeners to imagine themselves into a reality; characterization: the reader would impersonate people in the text. At this point we can see that Lucy Peppiatt’s thesis that different voices are at work in 1 Cor 11, or Douglas Campbell’s that different people are speaking in Romans 1-4, et al., are compatible with the realities of ancient reading. Paul could well have explained to his readers how to perform speeches-in-character if he composed his letter like this.

What about the listeners?

“Much like the orator or lector, the audience does more than simply fill a space in the room. They are a part of the process through listening, responding, and remembering” (23). The African American “call and response” approach to sermons and speeches is consistent with how ancient audiences participated in public reading. This is not a “come and sit and be quiet” Sunday sermon but instead a “come and participate” public reading of a Pauline letter.

Thus it begins with listening — and texts remind us that some fell asleep and some were engaged.

A critical element in ancient reading was remembering: audiences were not waiting for handouts or texts but relied on their ability to listen and remember what they heard. Note-taking sometimes occurred; recalling with others happened. The use of images by the reader or the text of Paul and its performance enabled greater remembering.

The result of reading and audience participation, then, is paideia, or character formation. Here I will focus on the audience’s formation. Shiell points to a few elements. In some ways the churches became analogous to ancient reading communities in that they gathered to hear, responded and carried on the formation with one another. There was emotional submission to the lector/rhetor, which can be negative or positive. Audiences were often encouraged to identify with a moral figure, and in Paul’s letters at times he functions this way; Peter appeals to Sarah; we could expand this but the point needs little more support. One of Paul’s major aims was to form his audience morally into character formation. That is, his theology was mixed with exhortation to get his churches to live properly in Christ.

William Shiell’s fine book, from which I learned a ton, is an excellent introduction both to rhetoric and performance, but it goes beyond this to give illustrations from NT texts on how to make use of what we can learn from performance criticism. I’m working on Colossians these days and I find myself wondering how a 1st Century lector would have performed the letter and also how that church at Colosse might have responded in the public reading of the letter.

We will be returning to Lucy Peppiatt’s book soon on this blog and this post sets the stage for being more sensitive to 1 Cor 11 as performance and audience response.

June 11, 2015 But the Greatest of These is Love (RJS)
Recent Comments
2 Comments | Leave a Comment
""
Queenofthefuzzybugs The (Non)Wesleyan (Non)Quadrilateral
""
Xanthrince JesusCreed.org Blog Prayer
""
William Ristau Writing In Your Life
"'This renewal began first with the renewal of the people of God (chapter 5 or ..."
Kostya2 Putting the Bible Together
Browse Our Archives
Related posts from Jesus Creed