Jesus is the Keystone (RJS) 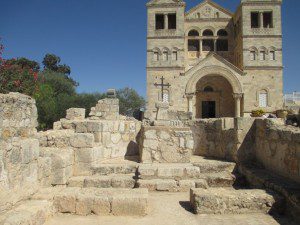 Jesus is the Keystone of God’s plan to resolve disorder and perfect order, or so claims John Walton in the next chapter of his new book The Lost World of Adam and Eve. But Jesus is more than simply the solution to a problem. He resolves disorder introduced by sin, but his presence and participation was always part of the plan to perfect order.

We can begin this discussion by looking at an all important creation text, Colossians 1:15-23.

The Son is the image of the invisible God, the firstborn over all creation. For in him all things were created: things in heaven and on earth, visible and invisible, whether thrones or powers or rulers or authorities; all things have been created through him and for him. He is before all things, and in him all things hold together. And he is the head of the body, the church; he is the beginning and the firstborn from among the dead, so that in everything he might have the supremacy. For God was pleased to have all his fullness dwell in him, and through him to reconcile to himself all things, whether things on earth or things in heaven, by making peace through his blood, shed on the cross. (1:15-20)

Although this isn’t a text that leaps to mind when thinking about creation according to Scripture, it should be. Look at the passage:

Christ is the center and source of order. His role in perfecting order is not contingent on the human need for redemption, but precedes human existence.

The next few verses make this role in resolving disorder more explicit.

Once you were alienated from God and were enemies in your minds because of your evil behavior. But now he has reconciled you by Christ’s physical body through death to present you holy in his sight, without blemish and free from accusation— if you continue in your faith, established and firm, and do not move from the hope held out in the gospel. This is the gospel that you heard and that has been proclaimed to every creature under heaven, and of which I, Paul, have become a servant. (1:21-23)

Jesus is the keystone of creation; bringing order from non-order and providing a resolution for the problem of disorder introduced by sin.

The sweep of Scripture. Walton then suggests a reading of the biblical story, both Old Testament and New Testament, through this lens.  He has already dealt with the early chapters of Genesis. God created a world bringing order out of non-order, but disorder was introduced by human sin.

This disorder introduced by human sin comes to a head in the events leading up to the flood.

After the flood we have the Tower of Babel. Walton interprets this as a human attempt to re-establish sacred space and “make a name for themselves.” The problem here isn’t pride, but supplanting God with themselves.

[T]hey are doing so for their own benefit – that their name might be exalted as a thriving, prosperous civilization. Making a name for oneself in the ancient world was a way to secure one’s memory through successive generations. Sacred space should exalt and establish the name of God, but these people see it only as a way to improve their situation. (p. 164)

God is not pleased, disperses the people and confuses their languages introducing non-order once again.

Babel is followed by the establishment of a covenant with Abraham and his descendants.

Genesis 12 (the covenant) represents God’s initiative to re-establish sacred space because God is going to dwell again in the midst of people (Abraham’s family, Israel), in the tabernacle and then the temple. (p. 164)

The tabernacle, prepared according to God’s instructions in the wilderness, becomes filled with his presence. Deuteronomy 30:15-20 elaborates on the establishment of Israel as God’s people.

God’s initiative to restore sacred space, then, began with the covenant – a relationship that would lead to more significant levels of relationship across the span of time.  In the covenant relationship, God began revealing himself to Abraham and his family. He then adopted Israel (the nation that came from Abraham) to be his people, and he took up his residence among them. … So God’s initiative provided for life and order in relationship with God through his abiding presence. (p. 166)

The Israelites fail to maintain the law and covenant from their end. This leads through the judges, kings, and prophets to exile. This leads to the culmination of God’s plan for reconciliation through incarnation.

As we know, the new covenant is accomplished through Jesus, but this is only one of the roles of Jesus relative to the unfolding plan of God’s presence being restored. We learn in John 1:14 that “the Word became flesh and made his dwelling among us. We have seen his glory.” This is the same language used with regard to the tabernacle. The incarnation thus plays a role in making God’s presence available in the midst of his people. In this way, Jesus replaces the temple. (p. 166-167)

After the resurrection and ascension of Jesus, the disorder of languages is (symbolically) undone in Acts 2 – order from non-order. Symbolically because it was a breaking through of the future, not a permanent change in the present. It was a preview of what will be.  The establishment of the church is also important in establishing order.

The church is testimony to God bringing order by resolving the disorder of sin. The church also represents order because it is the center of God’s presence in the world. (p. 167)

Walton then moves on to Revelation 21 which describes in figurative language the full establishment of new creation and the perfection of order.  Both non-order (the sea, death, mourning, crying, pain and darkness) and disorder (Rev. 20) are resolved once and for all. God’s dwelling is now among the people,  there is no temple “because the Lord God Almighty and the Lamb are its temple.”  The culmination of new creation in Revelation 21-22 is clearly centered on Jesus. “He fulfills the law … he fulfills the covenant … and he fulfills creation.” (p. 168)

Walton takes some of the elements of Genesis (flood, Babel and the confusion of languages) as historical – more literally than I would be inclined – but the overall vision he casts is compelling. In the ancient Near Eastern context the tower represented a human attempt to supplant or preempt God in establishing sacred space. But God establishes the covenant according to his plan and on his initiative. We see both a plan for human participation with God bringing order from non-order, human failure (repeatedly) and the role of Jesus, alpha and omega in establishing order and resolving disorder.

Jesus is the keystone of God’s plan. Before Adam, before all things, the firstborn in whom all things hold together.

Does this outline by Walton change your picture of the sweep of scripture?

Does it change how you might view the Jesus/Adam comparison that Paul makes in Romans?

The next chapter of Walton’s book looks at Paul’s use of Adam and includes a contribution from N. T. Wright – but that’s for the next post.