Prayer in the Earliest Church

A minority religious group provokes curiosity among their neighbors, lot least because of their habits concerning ritual and prayer. Their women are conspicuously veiled; they gather for meetings whose mysterious conduct and message lead to anxiety. They stop even in their daily routine to pray, facing a specific direction, and using a set formula given by their founder as a mark of their faith (183).

This, from Ancient Christian Worship, evokes for many Muslim prayer practices but he is describing earliest Christian prayer practices. (I’m not sure how widespread veiling was.) But that description goes a long way to revealing how Jewish prayer worked and therefore how many early Christians would have prayed: set times, set prayers, location mattered.

In his section on Jewish origins, McGowan emphasizes again that “worship” was all of life and that prayers was not restricted to what happened when Christians gathered together for “worship.” Prayer was part of life. The Jewish approach to prayer involved morning and evening prayers (of the Shema, perhaps the Amidah) and mid-afternoon prayer (evoking the afternoon sacrifice). Jewish Christians inherited this prayer practice. E.g., Acts 2:42; 10:30.

Jesus teaches the disciples a prayer (Luke 11:2-4), and times of prayer probably were adaptations of the Jewish customs: three times a day seems by far the most likely number of times early Christians prayed. [For those interested, I have a small book on prayer books that roots them in ancient Jewish and Christian practices; it is called Praying with the Church and there is a link to it in the sidebar.] The Didache advocates saying the Lord’s Prayer three times a day.

In the post NT churches the Lord’s Prayer and the Psalms became the core of Christian prayer practices (Tertullian). McGowan suggests Tertullian taught praying privately in the morning and evening and then also at the three designated hours (e.g., 9am, noon, 3pm), and this becomes customary for early Christian prayer practices. Christians seemed to have prayed with the whole body: standing, kneeling, prostration, or more commonly standing with hands and head raised (cross-like). Hence, too, the sign of the cross.

In The Apostolic Tradition there are instructions for prayer at midnight.

A variety of Christian explanations was given but the practice of 3x per day, perhaps also adding morning and evening, is prior to Christianity.

Under the Constantinian shift prayer becomes more public and pervasive to the cities. Hence, from Apostolic Constitutions McGowan quotes this:

[The bishop is to urge the people] to come constantly to church morning and evening every day, and by no means to forsake it on any account, but to assemble together continually. . . . Assemble yourselves together every day, morning and evening, singing psalms and praying in the Lord’s house: in the morning saying the sixty-second Psalm, and in the evening the hundred and fortieth, but principally on the Sabbath day (Ap. Const. 2.59).

McGowan emphasizes variety with solid dimensions of unity around the Lord’s Prayer, the Psalms, and the hours of prayer. 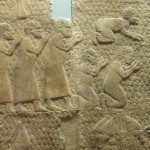 October 13, 2015 Perplexity, Paradox, and Psalms (RJS)
Recent Comments
4 Comments | Leave a Comment
"Curious as to why my comment was deleted? Here it is again for all who ..."
zfari Go Home or At Home?
"From my experiences, a God who has a Gender, a Sex, and a Biological Orientation... ..."
Kyllein MacKellerann What to Say When Someone says ..."
"What is the "final destruction of sin" please?"
Bob Shiloh What to Say When Someone says ..."
"Dr. Fitch, you write the following regarding the resurrection:Of course, Cone is focused on the ..."
J.R. Miller David Fitch, James Cone: Liberation Theology ..."
Browse Our Archives
Related posts from Jesus Creed