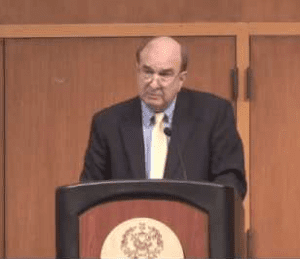 Last Friday I posted a summary by N.T. Wright of E.P. Sanders’ view of Judaism and Paul but I thought it would be good today to post Sanders’ own summary of what he accomplished (or said) in his famous Paul and Palestinian Judaism, a book every intelligent reader of Paul must read for herself or himself.

The source of this post is Redefining First-Century Jewish and Christian Identities: Essays in Honor of Ed Parish Sanders. In this collection E.P. Sanders has an essay called “Comparing Judaism and Christianity: An Academic Autobiography” (11-41). Here is his 11 point summary of what P&PJ was all about, and I have reformatted them into separate paragraphs (Sanders himself numbered them; pp. 24-25):

I shall now give a summary of the principal arguments, beginning with a negative point:

(1) The book is not about the sources of Paul’s thought. I granted that many or most topics in Paul could be paralleled in Jewish literature, but I was not pursuing an argument about where Paul got his ideas. Failure to note this point has misled several readers, some of whom have criticized me for using Jewish material later than Paul, while some have even imagined that in proposing that Paul had a different “pattern of religion” I meant that he had no connection with Judaism.

(2) In most of Palestinian literature, the “pattern” of “getting in and staying in” is simple: one is in by virtue of the election (or covenant); one stays in by remaining loyal to the Jewish law. These two basic convictions gave rise to the term covenantal nomism.”

(3) In Paul, all are “out” of the people of God and may enter only by faith in Christ.

(4) The two sets of terminology summarized by the phrases “being justified [righteoused] by faith” and “becom ing one person with Christ” essentially mean the same thing: these are the terms that indicate entry into the people of God: one “dies” with Christ or is righteoused by faith and thus transfers into the in-group.

(5) Once in, the member of the body of Christ should behave appropriately. In detail, this usually means the adoption of Jewish rules of ethics and other forms of behavior.

(6) In both Judaism and Paul, people in the in-group are punished rewarded depending on how well they adhere to the standards. Punishment and reward, however, are not “salvation”; people are saved, rather, by being in the in-group, and punishment is construed as keeping them in (as in 1 Cor 11:27-32).

(7) Paul does not accept the adequacy of the Jewish election for getting in; he begins the process of a theological rupture with Judaism by requiring faith in Christ.

(8) Formally, Paul sometimes accepts the whole law,” but it turns out that his Gentile converts do not actually have to keep all parts of the Jewish law, and that sometimes even Jewish Christians should depart from Jewish practice (as in the case of Peter in Antioch).

(9) Consequently, Paul’s “pattern” of religion is not the same as “covenantal nomism.” The efficacy of the election is rejected, and the law is accepted with qualifications.

(10) Paul’s pattern is, however, like covenantal nomism in that admission depends on the grace of God, while behavior is the responsibility of the individual—who, of course, is supported in his or her efforts by God’s love and mercy.

November 9, 2015 How to be a (Realist) Egalitarian
Recent Comments
5 Comments | Leave a Comment
""
Queenofthefuzzybugs The (Non)Wesleyan (Non)Quadrilateral
""
Xanthrince JesusCreed.org Blog Prayer
""
William Ristau Writing In Your Life
"'This renewal began first with the renewal of the people of God (chapter 5 or ..."
Kostya2 Putting the Bible Together
Browse Our Archives
Related posts from Jesus Creed