Redemption of Creation or Harps and Clouds? (RJS)

Redemption of Creation or Harps and Clouds? (RJS) December 29, 2015 RJS 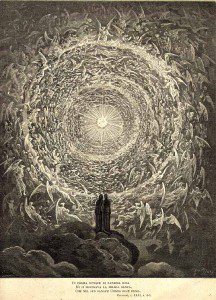 Although there are variations across the range of Christianity, it is not uncommon for Christians, especially evangelical Christians, to view our eternal destiny as a heaven of eternal worship. This is often caricatured as angels floating on clouds and playing harps for eternity. (Not exactly a view derived from Scripture.)   The core argument of J. Richard Middleton’s book  A New heaven and a New Earth is that the redemption and restoration described in Scripture is a holistic redemption of all of creation. Christians are not rescued from earth but saved along with heaven and earth. There are six particular New Testament passages that Middleton uses to support this view. (Passages that might point to a contrary view are discussed in the next chapter.)

1. Acts 3:19-21 Repent therefore, and turn to God so that your sins may be wiped out, so that times of refreshing may come from the presence of the Lord, and that he may send the Messiah appointed for you, that is, Jesus, who must remain in heaven until the time of universal restoration that God announced long ago through his holy prophets.

Universal restoration refers to the restoration of everything, not just Israel, not just humans, but all of creation. The NIV translates this verse “Heaven must receive him until the time comes for God to restore everything.

2. Ephesians 1:9-10 With all wisdom and insight he has made known to us the mystery of his will, according to his good pleasure that he set forth in Christ, as a plan for the fullness of time, to gather up all things in him, things in heaven and things on earth.

Since “the heavens and the earth” is how the first verse of Genesis describes the cosmos that God created in the beginning, Ephesians 1 effectively proclaims that eschatological salvation will be as wide as creation. (p. 158)

All things are not only reconciled, but reconciled through “the blood of his cross.”  The efficacy of atonement is not limited to humans. “The point is that redemption is as wide as creation; it is literally cosmic in scope.” (p. 159)

4. Romans 8:19-23 For the creation waits with eager longing for the revealing of the children of God; for the creation was subjected to futility, not of its own will but by the will of the one who subjected it, in hope that the creation itself will be set free from its bondage to decay and will obtain the freedom of the glory of the children of God. We know that the whole creation has been groaning in labor pains until now; and not only the creation, but we ourselves, who have the first fruits of the Spirit, groan inwardly while we wait for adoption, the redemption of our bodies.

Middleton suggests that the reference here is not to childbirth but to bondage of the Israelites in Egypt. Exodus 2: The Israelites groaned under their slavery, and cried out (v. 23).

Utilizing the exodus model of deliverance from Egyptian bondage, Paul portrays salvation in verse 21 as liberation or setting free from slavery, and the recipient of this salvation is both “creation itself”  (v. 21) and “the children of God” (v. 23). (p. 159)

We, humans who have failed to carry God’s image as commissioned, have enslaved creation.

The first step in the process of redemption, therefore, is that the oppressors (the human race) must be liberated from their own sin. Then the redemption of the nonhuman world can begin, when it will be set free from the bondage of sinful human rule.  (p. 160)

Redeemed human rule as God’s image will set all of creation free.

5. 2 Peter 3:10-13  But the day of the Lord will come like a thief, and then the heavens will pass away with a loud noise, and the elements will be dissolved with fire, and the earth and everything that is done on it will be disclosed. Since all these things are to be dissolved in this way, what sort of persons ought you to be in leading lives of holiness and godliness, waiting for and hastening the coming of the day of God, because of which the heavens will be set ablaze and dissolved, and the elements will melt with fire? But, in accordance with his promise, we wait for new heavens and a new earth, where righteousness is at home.

Everything done on earth is laid bare, disclosed, exposed. Middleton suggests that the judgment described in this passage results in the “destruction not of creation, but of sin, thus cleansing or purifying creation.” (p. 162)

In all of these passages the saving activity of God is restorative, repairing what is wrong. The object of God’s saving activity is “comprehensive and holistic – God intends to redeem or restore “all things” in heaven and earth, including our bodies.” (p. 163)

6. Revelation 21-22. The last passage is more extended: the hope for the future in Revelation, especially, but not limited to, chapters 21-22. The development of a holistic redemption from this passage is a bit more involved. We must start at the beginning. The garden of Eden “is the initial core location of God’s presence on earth.” (p. 164) It functions much as the holy of holies in the temple or tabernacle – the link between heaven and earth.  When Israel was called out God’s presence was very real, face-to-face, with Abraham, but even more importantly in the exodus and the Davidic kingdom. The tabernacle (Exodus 40:36-38) and the temple (1 Kings 8:10-11, 2 Chron. 5:13-14, 7:1-3) were filled with the glory of God’s presence.

In the New Testament Jesus himself is the divine presence (and temple).  John 1:14 provides one reference, but there are others as well.

We also have Jesus’s famous words, “Where two or three are gathered in my name, I am there among them” (Matt. 18:20). This statement takes on greater depth when we compare it to the rabbinic saying, “If two sit together and words fo the Law [are spoken] between them, the Divine Presence [Shekinah] rests between them.” In the words fo N. T. Wright, Jesus spoke and acted “as if he were the Shekinah in person, the presence of YHWH tabernacling with his people.” (p. 167)

Jesus has become the head of the church, the body of Christ, a new humanity, “God’s temple indwelt by the Holy Spirit (the divine Shekinah) as a foretaste of the promised future.” (p. 168)  In Revelation 21 with the descent of the new Jerusalem, “God’s presence decisively moves from heaven to earth.” (p. 169)  God no longer rules from heaven, but from his holy city on earth itself.  “No longer will there be any curse. The throne of God and of the Lamb will be in the city, and his servants will serve him.” (Rev. 22:3)  There is no temple in the city because “the city itself is the central locus of God’s presence on earth.” (p. 172)

In the age to come we dwell forever in the presence of the glory of God. But this isn’t a time of perpetual harps, wings, and clouds. Or, for that matter, choirs, organs, or worship bands.

But what are redeemed people to do in the new creation? Just as we have to get rid of the unbiblical idea of “going to heaven” as our final destiny, so we need to drop the pious ideas of a perpetual worship service as our ultimate purpose in the eschaton. (p. 174)

[T]he figure of the new Jerusalem, in the context of a new heaven and a new earth, represents nothing less than the renewal of human cultural life in all its fullness – this time without sin – in the context of a redeemed creation. That is the destiny of God’s cosmic temple.(p. 175)

And today – between Christ and the consummation, as the church lives between the times?

In its concrete communal life the church as the body of Christ is called to witness to the promised future of a new heaven and a new earth, in which righteousness dwells (2 Pet. 3:13) (p. 175)

The Christian hope is for a redeemed creation where God rules, righteousness dwells, and humankind fulfills the creation mandate to image and serve God.  No clouds, no wings, perhaps some playing harps (Rev. 15:2-3), but not as everlasting vocation.

What is Christian hope for the age to come?  What does Scripture teach?

Does Middleton’s argument hold up?  Are there other passages to consider?

December 29, 2015 Police Shootings: Some Perspective
Recent Comments
8 Comments | Leave a Comment
"Avoidance of these verses is at the heart of faulty conclusions. Humanistic interpretations are why ..."
Glenn Harrell What To Say When Someone Says ..."
"I think what you should say is: "I don't want to kink shame, but that's ..."
Spirit Plumber What To Say When Someone Says ..."
"Jesus dying temporarily for our sins doesn't really make much sense. Here's why:Let's say I ..."
C Nault What is a “Sacrifice of Atonement”?
"Any updates on when it will be released???"
Brian Kelly The “Second” Testament
Browse Our Archives
get the latest from
Evangelical
Sign up for our newsletter
POPULAR AT PATHEOS Evangelical
1