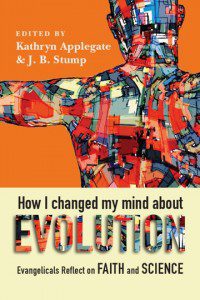 The stories in How I Changed My Mind About Evolution: Evangelicals Reflect on Faith and Science are fascinating. Twenty-five authors give twenty-five different perspectives.  There is no one pathway to grapple with these issues. The contributors include pastors (e.g. John Ortberg, Daniel Harrell, Ken Fong), biblical scholars (e.g. N.T. Wright, Scot McKnight, Tremper Longman III), scientists (e.g. Francis Collins, Jennifer Wiseman, Denis Lamoureaux) , and philosophers (e.g. James Stump, James K. A. Smith, Richard Mouw). Some became Christians in high school or college, others were raised in conservative Christian homes (the kind where evolution is a dirty word). Some of the authors reflect on a changed mind, starting from an anti-evolution, even young earth perspective. Others never had a deep personal struggle with the relationship between evolutionary biology and Christian faith. All, however, have found it necessary to grow in their understanding of the relationship between Christian faith and science. A number still have open questions (most often concerning Adam and Eve).

In my last post on this book I focused on Ken Fong’s story (What’s Your Story?).  Today I would like to look at Tremper Longman’s journey. Tremper is an Old Testament scholar, Robert H. Gundry Professor of Biblical Studies at Westmont College in Santa Barbara CA. He has an MDiv from Westminster Seminary and a Ph.D. in ancient Near Eastern languages and literature from Yale. We’ve been using his recent commentary on Genesis (2016) and his short book How to Read Genesis (2005) alongside other commentaries in our continuing walk through Genesis. He is also coauthor of Science, Creation and the Bible (2010) with Richard F. Carlson (a scientist). In the past we’ve walked through his commentary on Job and How to Read Job (written with John Walton).  He introduces himself in the clip below (from 2009).

At Westminster Seminary Genesis 1 and 2 were approached figuratively although an original historical couple was defended. The same was true when he returned and taught there (1981-1998).

Pretty much everyone took the view that there was considerable figurative language in the early chapters of Genesis (especially the “days”) and they taught that the earth and the cosmos were old. Even so, …, most if not all of the faculty, myself included, affirmed the special creation of Adam and Eve. At the time, it seemed critical to an Augustinian interpretation of Romans 5 which linked our sin nature to Adam’s sin in a way that suggested a hereditary connection. (p. 50)

After leaving Westminster, while writing How to Read Genesis he began to think more deeply about about the subject. Most importantly he pointed out that it is important to read Genesis “in light of its ancient setting.” “The biblical creation accounts were not written to counter Darwinism but rather Enuma Elish and other ancient ideas concerning who created creation.” (p. 50)

But he really had to dig in a few years later. While speaking at a small gathering at Lake Tahoe in 2009 he agreed to a filmed interview (the clips above are from this interview I believe).

The time turned out to be enjoyable. He asked me a wide range of questions about the Old Testament, including one about the historical Adam. He asked, “If it turns out that there was no literal historical Adam and Eve, does that mean that the biblical creation account is not true?” … While not committing myself to the view that Adam and Eve were not literal, I suggested that if it turns out that they were not it did not undermine the message that the biblical author intended to communicate (that God created humans, not how he did so).

The relevant clip is this one:

This didn’t cause problems at Westmont, but did at Reformed Theological Seminary where he was a regular adjunct and scheduled to teach a class “in a matter of days.”

I got an email from the dean … His concern was not only with the issue of the historical Adam. He began with my view that the biblical account did not require a rejection of evolution. … I didn’t know that their board prohibits anyone teaching (apparently part-time as well as full-time) who did not believe that Genesis was incompatible with the theory of evolution. (p. 52)

As a result Tremper Longman was no longer teaching at Reformed (and Bruce Waltke resigned under pressure at about the same time).  This incident started him thinking much more deeply and intentionally about the issues involved. His book with Dick Carlson Science, Creation and the Bible came out the next year.  I reviewed it in early 2011: Creation and Worldview and Creation and Worldview 2.  This is an excellent book – and a great place to start when digging into the biblical creation stories and their relationship (or not) to science.

Longman concludes his essay calling for us to continue to wrestle with the questions, both scientific and theological. To bury our heads in the sand and hope that evolution will disappear is simply unproductive.

I look forward to continuing to think about this important issue. Many interesting biblical and theological issues deserve renewed scrutiny. I am not a scientist, nor am I an apologist for evolution or for the idea that humanity goes back to a breeding population of some thousands of individuals, not a single pair. As a biblical scholar, though, it is important to maintain that the Bible does no proscribe these ideas. … While the biblical text does not speak to the issue of how God created, it does insist that he was the Creator. This truth is not discernible by scientific inquiry but by the eyes of faith and belief in his Word. While humanity may not go back to a representative couple, it seems to me that the biblical text does present the idea of what I heard theologian Jamie Smith of Calvin College call the “episodic nature of the Fall.” That is, when human beings were endowed with God’s image, they were morally innocent. Our sinful nature is not due to the way God made us, but the result of our own human rebellion.

These issues deserve careful examination. I look forward to continuing to think about and discuss these biblical and theological topics with scientists, theologians, biblical scholars, ministers and others. May we do so with prayer, devotion to God and his Word, and with respect for each other, even as we find ourselves in disagreement. (p. 53)

I have learned a great deal from Tremper Longman and the books and commentaries he has written. I look forward to continuing the walk through his Genesis commentary in the upcoming weeks. His last sentence is a great place to stop. May we continue to dig into these questions with prayer, devotion to God and his Word, and with respect for each other.