From time to time I read a blog or hear someone call another person a “heretic.” Recently a blog friend asked me how I would define “heretic” or “heresy.” Yes, the term “heretic” can be defined.

How do you define “heretic”?

Let me suggest that the term “heretic” is used in three ways, only one of which (I believe) is justifiable — though I have little hope that the mudslingers will learn to use terms as they are supposed to be used.

Before I get there, though, let me add another point: it is too bad we don’t have such an evocative term for praxis. Jesus’ focus was on “hypocrisy” more than “heresy,” and it might just be an indication of how far we’ve strayed for us to give so much attention to “heresy” and not enough to failure in praxis. As far as we can see, failure in practice is just as bad as failure in theology. But this is not what this post is about. We are concerned here with the term “heretic.”

Now to the three uses of this term that I routinely hear:

First, there is the slipshod use: a “heretic” is used here for anyone who doesn’t believe something we might think important. As when someone uses this term for someone who is amillennial or a preterist or a partial inerrantist or paedobaptistic or trans-substantialist … or a host of other things.

Those who use the term for such things ought to stop. It is unfair, it is volatile, and it really does damage to what is central to the faith and what is not. When I hear someone call another a “heretic” for something that is not central to our faith, I wonder more about the name-caller than the one being name-called. It tells us something about a person to hear them pronounce such denunciation and damnation on someone who genuinely is a believer.

Second, there is the extended use: a “heretic” is used here for anyone whom someone else thinks is skirting with danger on a central theological concept. I hear this at times about those who affirm the new perspective with respect to justification by faith. There are a variety of topics here — including one’s theory of the atonement, one’s view of Jesus’ self-consciousness, one’s view of Scripture … or one’s view of hell and final judgment.

The term “extended” refers to someone’s theological claims to suggest that, if they were to follow through in their logic (which as often as not they don’t), they will end up with some belief that is inherently no longer orthodox. Sometimes this is true. Example: some of those who deny final judgment end up denying a host of things — like God’s holiness or the ultimacy of Christ and the like — but some don’t, and we need to let each person speak for him- or herself.

And here’s something else that is very important to realize. “Heresy” was an interactive term, and as often as not it was a term used by both Jews and Christians for the other as they gradually broke off relations. Heresiologists and heresiology is the study of this time and those who definitively shaped how we now understand the term. In other words, the days of Irenaeus and the emerging proto-rabbinic class defined themselves over against one another.

Third, the proper use: a “heretic” is someone whose teachings or beliefs “undercut the very basis for Christian existence”. I here quote my friend and former colleague, Harold O.J. Brown’s book, Heresy. Hence, as with Lewis Ayres, it is wise to speak of a heretic as someone who has jumped the rails on the Nicene habitus and the life of the mind. The creed then is not just a set of lines but a wise reception and absorption of pro-Nicene theology in a way that it governs how we think and also how we read the Bible.

Most importantly, heresy pertains only to the central doctrines of God and Christ. Heresy is established by orthodoxy and orthodoxy was established by the classical creeds (Nicea, Constantinople, Ephesus, Chalcedon, etc). Brown once told me a heretic is someone who denies something in the classic forms of Christian orthodoxy, such that orthodoxy and heresy are mirror terms. That is, one is a heretic if one teaches what has already been judged to be heretical — say, docetism or Arianism.

Here’s the rule on the proper use of the term “heretic” or “heresy”: anything that denies Nicea or Constantinople or Chalcedon, etc., is heretical; anything that affirms them is orthodox. We should learn to use the term for such affirmations or denials.

I once had a conversation with Kallistos Ware about the topic of heresy and he told me something I value:

No one can be called a heretic until they have been informed by a proper authority of a theological error,
until that person has understood what she or he is teaching,
and only if the person then continues to teach such an idea.

So the proper ingredients of the heresy accusation is:

1. An authority,
2. Explanation and confrontation of the error, and

What is often the case today is that #1 is seized beyond one’s recognized status; in other words, one usurps the position of authority and then pontificates from that usurpation.

Who then should be announcing the term “heretic”?

Can the non-denominational or independent church use the term appropriately?

On the other hand, the term heretic measures someone according to the classical creeds (and how they were intended to be interpreted/understood) so, while someone’s church body may not adhere to the creeds (“our only creed is the Bible” kind of folks), a person’s teaching/beliefs may well violate the creedal tradition. Which is a way of saying What decides. 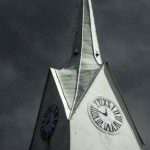 July 8, 2016 The Horror of Meticulous Determinism
Recent Comments
15 Comments | Leave a Comment
"WOW UR TESTIMONY JUST SAVED ME. WOW. Thank you praise Jesus. (I feel like that ..."
Luu Saturday Afternoon Book Review: Andrew Farley
"Avoidance of these verses is at the heart of faulty conclusions. Humanistic interpretations are why ..."
Glenn Harrell What To Say When Someone Says ..."
"I think what you should say is: "I don't want to kink shame, but that's ..."
Spirit Plumber What To Say When Someone Says ..."
"Jesus dying temporarily for our sins doesn't really make much sense. Here's why:Let's say I ..."
C Nault What is a “Sacrifice of Atonement”?
Browse Our Archives
get the latest from
Evangelical
Sign up for our newsletter
POPULAR AT PATHEOS Evangelical
1