No Creed but the Bible?

Three observations. First, in the history of the church nearly all churches have been creedal, and by that I mean they recite either The Apostles’ Creed or the Nicene Creed (actually, the Niceno-Constantinopolitan Creed) and they see in the creed the genuine summary of the Christian faith. Second, many churches today have both abandoned the creeds and have in their place constructed their own “Statement of Faith.” That Statement of Faith often affirms most of what is in the creed, but such churches/leaders are nervous about being creedal. To abandon the creed is to abandon what the church has believed for centuries.

Third, many others like to think they believe in “no creed but the Bible.” They can’t unless they are radical individualists. Eventually — read the story of Roger Williams — they will encounter that others don’t agree with their “Bible” (as they read it). Or, which is far more common, they will (1) affirm no creed but the Bible but (2) have a very strong interpretive tradition that, if you disagree with it, will be bounced as no longer biblical. Try asking a Baptist (no creed but the Bible) church if they could consider infant baptism or try asking a Churches of Christ church if they might think of hauling in a piano for the Christmas service. Flames of fire.

My contention: there is no such thing as a creed-less Christian. Everyone puts things together, and that putting together becomes “creedal” the moment it filters what we read in the Bible into a pattern of thinking about the Bible. Sorry folks there is only one option: affirm the creeds of the church or affirm your own creed. But either way you’ve got a creed.

The wisest approach to creeds is to express your beliefs and let others interact into a communion-based agreement. 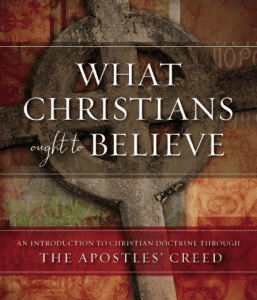 I’m seeing a trend among some low church types to affirm the creed, either The Apostles’ Creed or the Nicene Creed, as the core expression of the church’s faith. A good place for such churches to begin is with the safe (in all but occasional snarky humor) Michael Bird and his new book What Christians Ought to Believe.

I used to provide regular supply preaching for a warm and intimate fellowship of Christians in the Free Church tradition. I cheekily smiled to myself whenever I read their bulletin because it always had on it the words, “No creed but Christ, no book but the Bible.” The irony, of course, is that those words are not found in the Bible. This delightful group of saints had in fact turned their pious motto into a type of extrabiblical creed (17).

The problem is that it is no good just to say, “We believe the Bible!” Noble as that might sound, it runs into several problems. The fact is that many groups claim to believe the Bible, including Baptists, Episcopalians, Catholics, Methodists, Presbyterians, Jehovah’s Witnesses, Oneness Pentecostals, and many more (17).

There are biblical reasons for believing in creeds, including the Bible’s own “creed” like summaries — like Deuteronomy 6:5-8 but also more summary statements like 1 Thessalonians 4:14 or Romans 4:25, but even more in 1 Timothy 3:16 or Philippians 2:5-11:

1Tim. 3:16 Beyond all question, the mystery from which true godliness springs is great:

He appeared in the flesh,

was vindicated by the Spirit,

was seen by angels,

was preached among the nations,

was believed on in the world,

was taken up in glory.

Phil. 2:5   In your relationships with one another, have the same mindset as Christ Jesus:

did not consider equality with God something to be used to his own advantage;

7rather, he made himself nothing

by taking the very nature of a servant,

being made in human likeness.

8 And being found in appearance as a man,

by becoming obedient to death—

even death on a cross!

9 Therefore God exalted him to the highest place

and gave him the name that is above every name,

10that at the name of Jesus every knee should bow,

in heaven and on earth and under the earth,

11and every tongue acknowledge that Jesus Christ is Lord,

to the glory of God the Father.

Inasmuch as we all have a “tradition,” the creeds arguably provide the best tradition within which to read Scripture. This is because the creeds should be regarded as a biblically generated tradition that meets with the consensus of the universal church about what the main teachings of the Christian faith are. The creeds constitute an attempt to guide our reading of Scripture by setting out in advance the contents and concerns of Scripture itself. The creeds provide a kind of “Idiot’s Guide to Christianity” by briefly laying out the story, unity, coherence, and major themes of the Christian faith. In that sense, a creedal faith is crucial for a biblical faith and vice versa! (23)

August 4, 2016 Why Don't We Push the Storehouse Theory of Rain? (RJS)
Recent Comments
15 Comments | Leave a Comment
Browse Our Archives
get the latest from
Evangelical
Sign up for our newsletter
POPULAR AT PATHEOS Evangelical
1