Why Don’t We Push the Storehouse Theory of Rain? (RJS) 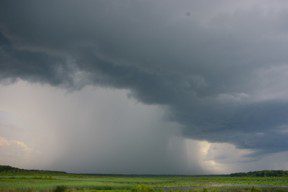 The Bible teaches that God governs the weather including the rain (image to the right from wikipedia). Many passages make this quite clear. Not only this he keeps rain, wind, snow and hail in his storehouses to be sent forth out of his bounty or wrath.

The LORD will open the heavens, the storehouse of his bounty, to send rain on your land in season and to bless all the work of your hands. You will lend to many nations but will borrow from none. Deut. 28:12

The LORD does whatever pleases him, in the heavens and on the earth, in the seas and all their depths. He makes clouds rise from the ends of the earth; he sends lightning with the rain and brings out the wind from his storehouses. Psalm 135:6-7

When he thunders, the waters in the heavens roar; he makes clouds rise from the ends of the earth. He sends lightning with the rain and brings out the wind from his storehouses. Jer 10:13, 51:16

The inspired writers of scripture had an understanding of weather that conflicts rather substantially with our modern understanding. We certainly agree that God is governs the weather, but must we accept the storehouse theory? Consider the following scenario:

What causes the rain? Most of us were taught that water evaporates from the ground level, rises to where the air is cooler, and condenses into water droplets that form clouds. We learned how cold fronts and warm fronts and low pressure systems bring rain. … Every year scientists develop increasingly accurate computer models of weather.

Now imagine that debates arise about what should be taught in schools about weather. Imagine that prominent scientists write popular books about meteorology that state, “From our scientific understanding of the causes of wind and rain, it is clear that no divine being controls the weather.” Imagine that a professional organization of science teachers writes a set of guidelines that state, “Students must learn that all weather phenomena follow from natural causes; weather is unguided and no divine action is involved.” Meanwhile, other people insist that these scientific explanations must be wrong because the Bible clearly teaches that God governs the weather. These people write books and give public speeches saying “Atheists invented their godless theories about evaporation and condensation. But we can prove that their so-called scientific theories are false and that the Bible is true.” They go to churches and teach, “If you believe what these scientists are saying about the causes of wind and rain, then you’ve abandoned belief in the Bible.” They petition school boards and courts to require that science classrooms also teach their “storehouses” theory of weather as an alternate explanation to evaporation and condensation.

Why don’t we have battles about the conflict between science and faith in the explanation of weather?

How would you respond to such a scenario?

John Walton (Professor of Old Testament at Wheaton College) draws on a the example of weather in his book The Lost World of Genesis One as well.

We believe that God controls the weather, yet we do not denounce meteorologists who produce their weather maps day to day based on the predictability of natural cause and effect processes. Can evolution be thought of in similar terms?

It would be unacceptable to adopt an evolutionary view without God. But it would likewise be unacceptable to adopt … meteorology as [a process] without God. The fact that … meteorology [does] not identify God’s role, or that many … meteorologists do not believe God has a role makes no difference. We can accept the results of …meteorology (regardless of the beliefs of the scientists) as processes we believe describe in part God’s way of working. … Why should our response to evolution be any different?

Most Christians, including me, have no trouble acknowledging that both science and the Bible are telling the truth when it comes to weather. God is sovereign over the weather – but we see no fundamental conflict between the scientific and biblical explanations. In fact, I rather expect most of us automatically classify the storehouse references as figurative language and/or poetic license. But it is not at all clear that the ancient authors did. Nonetheless we see no fundamental conflict between meteorology and faith.

Why is an evolutionary explanation for the development of life a concern – but predictability in weather and an underlying assumption of naturalism in the description of weather is not a concern?

The debates over creation, evolution, and intelligent design are in some ways similar to the examples given above concerning weather, but they are also far more complicated and give rise to deeper emotional responses with more significant theological consequences – or at least so many think.

The book by Deb and Loren Haarsma works through many of these questions and ideas in a clear and open fashion. This book is designed for individuals with questions, small groups, and adult education classes. Origins: Christian Perspectives on Creation, Evolution, and Intelligent Design is an excellent resource – and one I highly recommend. The book is designed to facilitate discussion. It is ideal for small groups or larger adult education classes. It should also be helpful for individuals with questions and concerns. There is now also available on Origins DVD; A Six-Session Investigation of Creation, Evolution, and Creative Design. Pastors or others with little background to frame a discussion of origins should find this book and DVD an excellent place to start. For those who wish to go deeper the Haarsma’s provide many references to assist.

John Walton’s book, along with books by Richard Carlson and Tremper Longman (Science, Creation and the Bible), and Johnny V. Miller and John M. Soden (In the Beginning … We Misunderstood), provide resources to dig into Scripture. It isn’t enough to focus on science and questions around origins without bringing Biblical Scholars into the discussion. These books are not designed specifically for small groups or adult education classes, but are written for a general Christian audience. These are also excellent resources for pastors, teachers, and other Christians concerned with the biblical questions raised by an ancient earth and the possibility of evolution.

What do you think? How can we start a profitable discussion on the issues of origins?

What would help in your church or with your friends and family?

As I am on vacation enjoying fishing, family, and blueberry picking (but not the cleaning), this is a revised combination of questions raised in two earlier posts.

August 4, 2016 Are Political Correctness and Anti-PC Both Coercive?
Recent Comments
9 Comments | Leave a Comment
Browse Our Archives
get the latest from
Evangelical
Sign up for our newsletter
POPULAR AT PATHEOS Evangelical
1