It Isn’t About Jacob! (RJS) 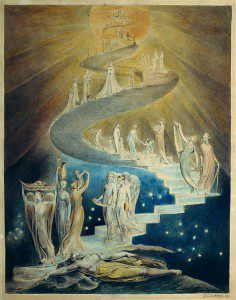 It has been awhile since the last post in our walk through Genesis – Isaac was Isaac-ing, but now we turn to Jacob, through whom the nation of Israel was established. Abraham and Isaac became fathers of many nations, but Jacob of only one, God’s chosen people Israel. Abraham had many sons, but only through Isaac rather than Ishmael, or the sons of his concubine Keturah (Gen 25:1-4), did the covenant promise continue. Isaac had two sons, but only through Jacob did the covenant promise continue. From here on out, however, all descendants are children of the promise.

The most striking thing in this section of Genesis (ch. 28-35) is that it isn’t about Jacob. It is about God preparing the way for his people Israel. With a typical Sunday School and Sermon background, this surprised me. The emphasis is usually on Jacob and his role, not on God and his mission and plan. But this isn’t a story to provide us with insight into how we should live – it is a story about what God was and is doing.

Nothing in the text gives any indication that God chose Jacob as the father of his people through any special merit or righteousness. In fact, the story of Isaac, Rebekah, Esau and Jacob is a story of one dysfunctional family. There are many Sunday School favorites here. Esau sells his birthright – his inheritance right as first born son – for a bowl of stew.  Isaac and Rebekah play favorites, which pits Esau and Jacob against each other. Rebekah and Jacob conspire to steal Esau’s blessing and ensure Jacob’s primacy in the family.

The blessing is not mere words. Bill Arnold in his commentary on Genesis notes:

The value of a patriarchal blessing was preeminent, and receiving the blessing at or near the end of the patriarch’s life made it a legally binding will. Such “testamental blessings” were illocutionary or performative utterances, in that the pronouncement of the words itself accomplished the act of blessing. (p. 245)

This isn’t the end of Isaac’s life (he dies and is buried after Jacob returns from a twenty year sojourn with his uncle), but it is the end of his role in the story of Israel.  Esau sold his birthright, but Jacob willingly, and with his mother’s prodding and help, stole Esau’s blessing. For his efforts he gained exile for a time.

It is hard to imagine a less deserving patriarch. Abraham was a man of faith and is held up as such. Isaac doesn’t play much of a role in the narrative, but the role he plays is neutral to positive, except perhaps the favoritism that plagued his family. On the other hand, there are few stories in the narrative of Jacob’s life that cast him in an undeniably positive light. His family was less than ideal – with conflicts between his wives, between his children at times, with his uncle and father-in-law, with his brother. This is not an epic story of a hero as founder of a nation. Jacob is hard to hold up as a role model in any meaningful way. This isn’t to say he was all bad, simply that righteousness and faith don’t seem high on the list most of the time.

God worked through Jacob. Here it becomes abundantly clear that the Genesis narrative from chapter 12 to the end is not a story of the patriarchs, it is a story of God’s work in history. God formed his people through Abraham, Isaac and Jacob.  Three accounts of meetings with God frame the Jacob story. Finding it necessary to leave Canaan, to find a wife from among his mother’s people, but more importantly to get away from his brother’s wrath, Jacob meets God for the first time. (The image above, based on this passage, is by William Blake)

He had a dream in which he saw a stairway resting on the earth, with its top reaching to heaven, and the angels of God were ascending and descending on it. There above it stood the Lord, and he said: “I am the Lord, the God of your father Abraham and the God of Isaac. I will give you and your descendants the land on which you are lying. Your descendants will be like the dust of the earth, and you will spread out to the west and to the east, to the north and to the south. All peoples on earth will be blessed through you and your offspring. I am with you and will watch over you wherever you go, and I will bring you back to this land. I will not leave you until I have done what I have promised you.” (28:12-15)

God renews the covenant promises he made to Abraham and Isaac, now to Jacob.  Jacob is the heir to the promise and the one through whom The Lord (Yaweh), the God of Abraham and Isaac, will establish his people in the land.  Jacob’s response is tentative and conditional. “If God will be with me and will watch over me … so that I return safely to my father’s household, then the Lord will be my God.” (v. 20-21)  Bill Arnold suggests that we should not read too much into Jacob’s conditional response, “the most that can be said about Jacob here is that his faith is not mature.” (p. 256)  Part of Arnold’s reasoning rests on the lack of critique in the text, but it seems that Jacob does many less than honorable things that are not explicitly critiqued in the text. While there are consequences for his theft of Esau’s blessing this is not critiqued either. Certainly Jacob’s faith is not mature, but perhaps we should read more into his tentative response. However, God will work through him as he is. 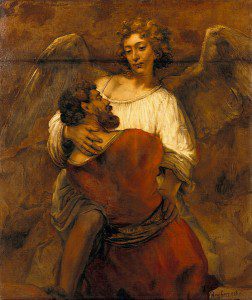 The story of Jacob’s time in Paddan-Aram, serving his uncle, acquiring two wives, 11 sons, a daughter, and much livestock is well known.  God is at work, although the family is far from perfect – or faithful. When Jacob leaves to return home after an absence of 20+ years his wife Rachel steals the household gods to bring with her.  En route and wary of the reception he can expect from his brother, Jacob again meets God it seems. (Image by Rembrandt)

So Jacob was left alone, and a man wrestled with him till daybreak. When the man saw that he could not overpower him, he touched the socket of Jacob’s hip so that his hip was wrenched as he wrestled with the man. Then the man said, “Let me go, for it is daybreak.” But Jacob replied, “I will not let you go unless you bless me.” The man asked him, “What is your name?” “Jacob,” he answered. Then the man said, “Your name will no longer be Jacob, but Israel, because you have struggled with God and with humans and have overcome.” Jacob said, “Please tell me your name.” But he replied, “Why do you ask my name?” Then he blessed him there. So Jacob called the place Peniel, saying, “It is because I saw God face to face, and yet my life was spared.” (32:24-30)

This chapter, and this passage, is full of word plays. “This reflects a dominant feature of the chapter impossible to communicate in translation; that of the literary artistry and interpretative power of word plays.” (p. 281)  The place names are punning names, and in this passage Jacob is Jacob-ing.

The verb “wrestle” (ʾābaq) almost certainly plays on the name of the river Jabbok (yabbōq) as well as on the name Jacob (yaʿăqōb).  … As a patriarch for all who would count themselves among his descendants, “Jacob at the Jabbok ʾābaq-ing with God” becomes the paradigm for all who would struggle with God. (p. 283)

Then God said to Jacob, “Go up to Bethel and settle there, and build an altar there to God, who appeared to you when you were fleeing from your brother Esau.” So Jacob said to his household and to all who were with him, “Get rid of the foreign gods you have with you, and purify yourselves and change your clothes. Then come, let us go up to Bethel, where I will build an altar to God, who answered me in the day of my distress and who has been with me wherever I have gone.” So they gave Jacob all the foreign gods they had and the rings in their ears, and Jacob buried them under the oak at Shechem. (35:1-4)

After Jacob returned from Paddan Aram, God appeared to him again and blessed him. God said to him, “Your name is Jacob, but you will no longer be called Jacob; your name will be Israel.” So he named him Israel. And God said to him, “I am God Almighty; be fruitful and increase in number. A nation and a community of nations will come from you, and kings will be among your descendants. The land I gave to Abraham and Isaac I also give to you, and I will give this land to your descendants after you.” Then God went up from him at the place where he had talked with him. (35:9-13)

That Jacob’s name is now Israel concludes the narrative of Jacob and sets up the story of his descendants. Bill Arnold thinks it likely that the renaming of Jacob as Israel in both chapter 32 and 35 reflects different traditions brought together into the final text we have. They are not independent, carelessly patched together, but parts of a carefully constructed telling of the story of God establishing his people. “This revelatory appearance of God in vv. 9-15 makes Jacob essentially another Abraham. In a sense, this passage is Jacob’s covenant renewal. … Jacob is fittingly Abraham’s successor as “father of the faith.” (p. 304)

This isn’t about Jacob. It is about God and his work in history.

October 28, 2016 Christians in the Eyes of their Enemies
Recent Comments
2 Comments | Leave a Comment
""
Queenofthefuzzybugs The (Non)Wesleyan (Non)Quadrilateral
""
Xanthrince JesusCreed.org Blog Prayer
""
William Ristau Writing In Your Life
"'This renewal began first with the renewal of the people of God (chapter 5 or ..."
Kostya2 Putting the Bible Together
Browse Our Archives
Related posts from Jesus Creed