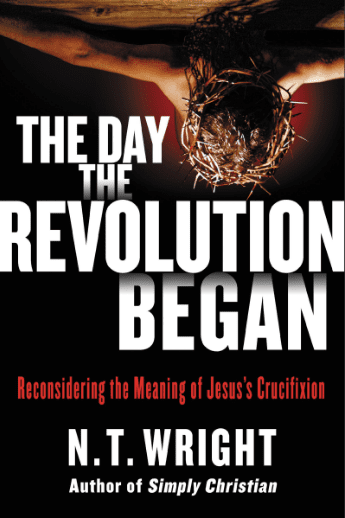 If anything is clear in NT Wright’s new book, The Day the Revolution Began, it is that Christians have … here are Wright’s own words:

We have Platonized our eschatology (substituting “souls going to heaven” for the promised new creation) and have therefore moralized our anthropology (substituting a qualifying examination of moral performance for the biblical notion of the human vocation), with the result that we have paganized our soteriology, our understanding of “salvation’ (substituting the idea of “God killing Jesus to satisfy his wrath1 for the genuinely biblical notions we are about to explore). (147)

Atonement theory gets distorted when placed in these three rubrics: Platonizing, Moralizing, and Paganizing. Two things, he contends, must be restarted:

Second, that goal would be attained by means of the death of Jesus, through which the powers of sin and death were defeated. That defeat was accomplished through the dying “for sins” of Jesus, Israel’s Messiah: Jesus, representing Israel and the world, took upon himself the full force of the divine condemnation of Sin itself, so that all those “in him” would not suffer it themselves. 229

Wright thinks we need to re-read typically-used Pauline texts in light of a Passover narrative. First, a text from Galatians is cited:

In Galatians 1:4 Paul declares that Jesus, the Messiah, our Lord, “gave himself for our sins, to rescue us from the present evil age, according to the will of God our father.”

Then a re-reading of that text in light of a Passover-oriented narrative is given:

Or, to put it in the language of the biblical narrative to which Paul will appeal frequently in Galatians, the new Passover (liberation from the enslaving powers) is accomplished through the rescue from exile (“for our sins”), and all has taken place in fulfillment of the age-old divine purpose (“according to the will of God”). 230

Another largely neglected theme is that Paul’s Christology has often ignored the Messiahship of Jesus, and when Messiah is ignored, neglected, or diminished the narrative is distorted and the goal is distorted — and that means atonement itself is distorted. Hence, for Wright, atonement theory can’t be understood until the right narrative is used to locate it in the story.