The Stories We Tell (RJS) 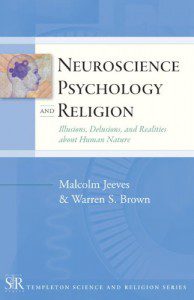 Chapter 2 of Neuroscience, Psychology, and Religion: Illusions, Delusions, and Realities about Human Nature by  Malcolm Jeeves and Warren S. Brown digs into the warfare model of science as it pertains to neuroscience and psychology. Does science disprove God? Whether a person believes it does or not depends more on the narrative constructed around the science than it does on the science itself. Humans are story-telling creatures. Sigmund Freud was widely viewed as having “‘explained away’ religious beliefs as ‘nothing but’ wishful thinking. … ‘nothing but’ a social neurosis to be grown out of.” (p. 13,14)  Jeeves and Brown point out that Freud never said this disproved the truth of religious claims – but he clearly thought it did.  Even after his views were criticized and left behind in the field, he remained influential. Professional criticism of his views on the origin of religion or the psychology of religion didn’t trickle down.

This did little in the popular mind, however, to bring Freud’s views into disrespect. Freud had produced a good story, and his influence in this, as in other areas, persisted long after his views were widely discredited by scholars in related disciplines. (p. 14)

Freud’s story captured public imagination, even if the basis for this story was demolished. Other influential psychologists took a much more benign or positive view of religion. Without controversial elements these generally received less press. Roger Sperry, who shared the 1981 Nobel Prize in Physiology and Medicine for his brain research “advocated for the benefits of a positive relationship between psychology and religion,” (p. 16) although his view of profitable religion was of a liberal form devoid of supernatural beliefs.  Still, human behavior was not viewed as nothing but chemical reactions and reinforced habits.

Evolutionary psychology raised another set of questions. Jeeves and Brown frame the question:

In fact, there is another debate taking place, not between science and religion, but within science itself – among scientists studying the evolution of religion. Whereas they agree that religious belief is an outgrowth of brain architecture that evolved during early human history, they disagree about why this tendency to believe evolved at all. Was it because belief itself is adaptive? Or was it because it was just another evolutionary by-product, the mere consequence of some other evolutionary adaptation of the human brain? In sum, do we believe because of an evolutionary neurological accident or because of evolutionary adaptation? (p. 20)

The questions are complex, but if one believes that God created the world in a manner that appears evolutionary either view can be reconciled with Christian faith. The capacity for religious belief (something not possessed by any other animal) could have developed in response to the presence of God or have produced brains “primed for religious belief.”  The evolutionary advantage provided by the ability to infer causal connections produced a brain ready to accept God’s revelation. One can take the same set of scientific observations and construct a story that does away with God or reinforces belief in God.  Belief in a loving God is not rendered irrational. Justin Barrett, at Oxford when the book was written, but now at Fuller Seminary, responds with an example.

Because we have a scientific explanation for a mental phenomenon, he argues, that does not require the end of belief in a reality beyond. He asks, for example “Suppose science produces a convincing account for why I think my wife loves me – should I then stop believing that she does?” (p. 22)

Nothing Buttery. Far too often both scholars and lay people succumb to the fallacy of what Jeeves calls “nothing buttery.” Francis Crick is quoted and I will expand the quote.

The Astonishing Hypothesis is that “You,” your joys and your sorrows, your memories and your ambitions, your sense of personal identity and free will, are in fact no more than the behavior of a vast assembly of nerve cells and their associated molecules. As Lewis Carroll’s Alice might have phrased it: “You’re nothing but a pack of neurons.”  This hypothesis is so alien to the ideas of most people alive today that it can truly be called astonishing. (The Astonishing Hypothesis p. 3)

Jeeves and Brown suggest that this is akin to say that Crick’s book is nothing but ink stokes (or, these days, ascii characters in electronic form). There is a meaning that goes deeper than the materials and scaffold. Likewise, for human existence there is a reality that goes beyond the surface analysis. It is naive, so Jeeves and Brown argue, to take the view that humans are nothing but molecules and chemical reactions. Religious belief may be an illusion or a reality (certainly all religions cannot be equally true), but the argument has to be based on something other than reductionist nothing buttery. Science alone cannot address the question.

If Christians could become more attuned to the distinction between scientific observations and the scientific deductions and the metaphysical stories tied to these observations and deductions, it would help us move past the warfare model. To have an impact in the world today, I think we must learn to engage the stories as stories rather than attempting to refute the stories by attacking the science. The science will stand or fall on the weight of the evidence. We can afford to take a hands-off approach. The meta-narratives spun to make sense of these observations are on the front line. We need to tell a better story – and the gospel is a far better story.

How would you respond to the view that humans are nothing but molecules and chemical reactions?

Does an understanding of world religions or brain structure eliminate God from the picture?