Was the Reformation a Mistake? 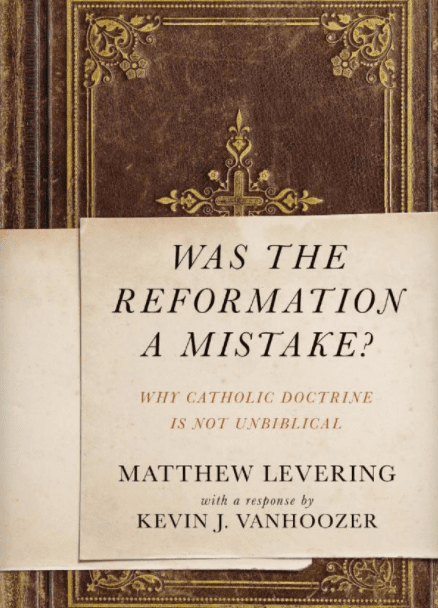 One of the approaches of Martin Luther to Roman Catholic theology was to argue that many Catholic beliefs — Scripture, Mary, Eucharist, seven sacraments, monasticism, justification and merit, purgatory, the saints, and the papacy — were unbiblical, therefore unwarranted, and at least potentially dangerous or distorting. Were their ideas about these topics unbiblical?

Matthew Levering, in his new book Was the Reformation a Mistake? Why Catholic Doctrine is Not Unbiblical, with a robust response by Kevin Vanhoozer, sets out to show how Catholic biblical reasoning accounts for each of those beliefs mentioned above.

So, what is Catholic biblical reasoning? It is Bible-based, church-shaped, worship-centered, and developmental. In other words, it is biblical but not just the Bible.

Catholic doctrine arises from Scripture, but it does so through a liturgically inflected and communal process of “thinking with” Scripture in ways that cannot be reduced to an appeal to biblical texts for irrefutable evidence of the particular reality expressed by the doctrinal judgment. 20

I am not trying to prove Catholic doctrine to Protestants. What I am trying to do is to offer some grounds for challenging the view that the Catholic positions on the topics treated in my nine chapters are “unbiblical,” in the sense of being derived from modes of reasoning not warranted by Scripture and/or being not rooted in Scripture. 20

Levering, as he often does, makes an emphasis of the liturgical context for biblically-based reasoning:

After Jesus’s resurrection, his way of teaching the central truths of faith required the disciples to come to a clearer and deeper understanding of these truths in communal and liturgical contexts. 22

Through his Spirit of truth, Jesus ensured that his apostles and those to whom the apostles handed on the leadership of the church (such as Timothy) faithfully wrote and then drew together the books of Christian Scripture. Again through his Spirit of truth, Jesus ensures that Scripture would be interpreted faithfully by the church in handing down the gospel over the centuries. 22-23

Notice the ecclesiology at work in Catholic biblical reasoning:

The reasoning prescribed by the Bible for interpreting biblical texts is hierarchically and liturgically contextualized, in the sense that the Spirit communicates the word of Christ to the people of God who are gathered for worship by “the apostles and the elders,” and by those like Timothy whom the apostles (whose testimony to the gospel of Christ remains uniquely authoritative) appointed as their successors. 24

When God has gathered us in worship and praise, God reveals the meaning of his Word to us. 26

I am simply suggesting that the actual biblical ways in which God brings about his people’s understanding of his Word deserve attention when the question is what modes of biblical reasoning have a proper role in grounding Christian doctrinal judgments of truth. Even if (uninspired) interpreters cannot replicate the work of the (inspired) apostolic authors, the Holy Spirit may guide the church in Spirit-guided modes of biblical reasoning that, while rooted in more than the plain sense of the text, should not be called unbiblical. 27

So, his argument is that what Catholics believe about these nine topics is both biblical and not unbiblical and it is a kind of biblical reasoning:

Although Paul’s approach to biblical interpretation is not normative for post-biblical interpreters in any strong or determinative sense, it does provide biblical warrant for similar modes of biblical reasoning practiced by the church under the guidance of the Spirit in later centuries. 28

When asked to show what convinces us that Scripture supports the doctrinal positions by which we articulate the content of our faith, we must point to specific biblical texts, but we must also keep in mind that the modes of biblical reasoning that we find in Scripture are not normally aimed at providing logical or historical proofs, but instead emphasize participation in the living liturgical community that receives and ponders the Word of God. 28

My biblical reflections aim to show that even if one disagrees with judgments made in the course of Catholic doctrinal development, the Catholic positions on the nine disputed doctrines should not be rejected as unbiblical or as lacking in biblical grounding—at least given the Catholic view (shared by many Protestants as well) of biblically warranted modes of biblical reasoning. 29

The problem, as Levering readily admits, was the condition of the Catholic church in age of the Reformers:

But despite the need to reject easy caricatures, there was in fact a massive institutional problem characterized by a lack of holiness and an abuse of power, especially papal abuse but certainly not limited to it. 30

Instead, it seemed plausible that the bishops of Rome had gradually seized power and led the Catholic Church into its present ruin of Mary- and saint-focused piety, of selling indulgences on a grand scale, of lavish ecclesiastical lifestyles, of poorly educated clergy and scripturally ignorant laity, of neo-Pelagian theology, and so forth.

Thus, the Reformation was not a mistake. It was needed:

To call the Reformation a “mistake” in such a context would be absurd. I hold that the Reformers made mistakes, but that they chose to be reformers was not a mistake. There had to be a Reformation, and it is good that the Reformation shook up a status quo in Rome and elsewhere that was unacceptable and untenable. In this sense, the Protestant Reformation cannot be dismissed as a mere “mistake,” even if in my view it mistakenly deemed some Catholic doctrines to be unbiblical and church-dividing. 31

Although I differ from the Reformers with respect to the biblical grounding of the Catholic doctrines they disputed, they were right in seeking reform, in perceiving the large extent of post-biblical doctrinal development, and in insisting upon grace, faith, and Scripture at the very heart of Christianity. 31

August 24, 2017 Stringing it Together (RJS)
Recent Comments
11 Comments | Leave a Comment
"Curious as to why my comment was deleted? Here it is again for all who ..."
zfari Go Home or At Home?
"From my experiences, a God who has a Gender, a Sex, and a Biological Orientation... ..."
Kyllein MacKellerann What to Say When Someone says ..."
"What is the "final destruction of sin" please?"
Bob Shiloh What to Say When Someone says ..."
"Dr. Fitch, you write the following regarding the resurrection:Of course, Cone is focused on the ..."
J.R. Miller David Fitch, James Cone: Liberation Theology ..."
Browse Our Archives
Related posts from Jesus Creed