Philip Barton Payne, author of Man and Woman, One in Christ, (PhD, Cambridge) has served with his wife Nancy with the Evangelical Free Church Mission in Japan for seven years. He has taught New Testament studies in Cambridge colleges, Trinity Evangelical Divinity School, Gordon-Conwell, Bethel, and Fuller, and is known for his studies on textual criticism, the parables of Jesus, and Paul’s teachings on women. He blogs at www.pbpayne.com.

This summary of six groundbreaking discoveries from my New Testament Studies 63 (October, 2017) article about the oldest Bible in Greek, Codex Vaticanus, henceforth “Vaticanus,” dated AD 325–350, highlights their implications for the reliability of the transmission of the Greek New Testament and for the equal standing of man and woman:

Scribe B (name unknown) is the only scribe of Vaticanus who preserved the bars (the technical term is “obeloi”) Origen (ca. 185–ca. 254, the most famous expert on the text of the Bible from the early church) used to show where the Septuagint Greek translation (henceforth “LXX”) of the Hebrew Scriptures added words not in the Hebrew text. Scribe B reproduced Vaticanus’s Prophets so faithfully that he or she did not add bars to the exemplar’s text even by passages explicitly identified as “not in the Hebrew.” “Or she” reflects Eusebius’s statement in Church History 6.23.2 that Origen employed “girls skilled in penmanship.”

The sharp contrast between the virtually complete absence of periods at the end of sentences in Vaticanus’s Gospels and the presence of periods throughout all its epistles shows that Scribe B copied both exemplars faithfully. This is the only explanation for this sharp contrast congruent with a copyist’s primary task, to reproduce the exemplar’s text.

Vaticanus symbols marking differences between manuscripts show that Scribe B was aware of variants, copied exemplars faithfully, and preferred the earliest possible text. Scribe B was extraordinarily careful not to add to or take away text from Vaticanus’s exemplars, not even adding periods after sentences or bars where original ink marginal notes identify LXX additions. All this supports Birdsall’s judgment in The Bible as Book, 35, “Behind the quality of the New Testament text in this codex, there appears to be critical ‘know-how’.”

The Extraordinarily Early Text of the Gospels in Vaticanus

The text of P75 is remarkably similar to the corresponding text in Vaticanus. Carlo Martini’s Il problema della recensionalità del codice B alla luce del papiro Bodmer xiv argued this in detail, and scholars have confirmed his findings. The virtually complete absence of periods at the end of sentences in the Vaticanus Gospels but their presence throughout the Vaticanus epistles and P75 indicates that, as usual then, all four Vaticanus Gospels were copied from the same manuscript, but one so primitive it had virtually no periods. The Vaticanus Gospels’ lack of periods indicates that their text is earlier than the Vaticanus epistles’ text and even earlier than P75’s text. Paul Canart, world-renowned expert on Vaticanus, agrees with this explanation and knows of no publication of this apparently original observation. None of the New Testament papyri that the standard Nestle-Aland critical text identifies as second-century (P32, 90, 98, 104) contains a period. Kurt and Barbara Aland, The Text of the New Testament, 287, state, “the original texts … naturally also lacked punctuation.” The Vaticanus Gospels’ text is so old it was not contaminated by any of the five blocks of added text their two-dot+bar symbols mark. These discoveries corroborate both halves of Bruce Metzger’s judgment in ‘Recent Developments in the Textual Criticism of the New Testament’, Historical and Literary Studies: Pagan, Jewish, and Christian (NTTS 8; Leiden/Grand Rapids: Brill/Eerdmans, 1968) 145–62, at 157–58, “Since B [=Vaticanus] is not a lineal descendent of P75, the common ancestor of both carries the … text to a period prior to AD 175–225, the date assigned to P75.” It also supports Stephen Pisano’s affirmation in Le manuscrit B de la Bible, 96, “of the text of B as an extremely reliable witness …, especially of the Gospels and Acts.”

The Second Century Text of the Epistles in Codex Sinaiticus

Chris Stevens’ November 18, 2015 Evangelical Theological Society paper, “Titus in P32 and Sinaiticus: Textual Reliability and Scribal Design,” showed that there is only one letter in the text of Titus in P32, dated ca. AD 200, that differs from the text of Sinaiticus, so the Sinaiticus text of Titus goes back at least to ca. AD 200. Since fourth century scribes copied entire collections of the epistles, not separate epistles from different manuscripts, the rest of the Sinaiticus epistles’ text is probably also this old. This supports a second century date not only of the entire text of the Vaticanus Gospels, but also of the entire text of the Sinaiticus epistles.

The Antiquity of Two-Dot Symbols in Vaticanus

Approximately 780 two-dot symbols in the margins of Vaticanus mark the location of Greek textual variants. Fifty-one of them match the original Vaticanus ink. Two more with original ink protruding behind reinking suggest that most two-dot symbols were re-inked with the rest of Vaticanus ca. AD 1000. The same symbol occurs in the fourth- or fifth-century LXX G, the earliest extensive copy of Origen’s annotated LXX. LXX G’s and Vaticanus’s many parallels suggest they came from the same scriptorium. The following example from LXX G 228 demonstrates ancient use of this two-dot symbol to mark textual variants between Greek manuscripts.

Seven key facts support the conclusion that all eight bars with characteristic features adjacent to a two-dot symbol mark the location of a multi-word textual addition:

All this supports the conclusion that two-dot+bar symbols mark the location of multi-word blocks of added text.

1 Corinthians 14:34–35 silences women in church three times with no qualification. Chapter 11, however, guides how women should prophesy, and chapter 14:5, 24 (3x), 26 and 31 affirm “all” speaking in church. Popular resolutions of this contradiction limit 14:34–35’s demand for silence only to disruptive chatter or, recently contrived, only to judging prophecies. These resolutions should be rejected since they permit speech verse 35 prohibits, namely asking questions from a desire to learn.

As this photograph shows, Scribe B identified 1 Corinthians 14:34–35 as added text

but faithfully preserved those verses from Vaticanus’s epistles’ exemplar, just as Scribe B faithfully preserved text in the Vaticanus Prophets marked with a bar as later additions. It is precisely because of honest preservation of textual data that Scribe B’s textual judgments should be respected, not dismissed.

In the 121 cases of a bar in the Vaticanus Prophets, a comparison with the Hebrew Scriptures shows that Scribe B’s judgments were correct, that the Greek translation being copied did indeed add words that were not in the Hebrew text.

Furthermore, manuscripts confirm a block of text was added at the gap Scribe B left following every other two-dot+bar symbol. Therefore, this symbol implies that Scribe B had manuscript evidence 1 Corinthians 14:34–35 was non-original, added text. We should trust Scribe B’s textual judgments because the wide scope of textual variants Scribe B marked implies access to far more pre-Vaticanus NT manuscript text than survives today.

1 Corinthians 14:34–35 is the only multi-word textual variant ever identified at the gap following this two-dot+bar symbol. At least sixty-two textual studies argue that 14:34–35 is a later addition. Joseph Fitzmyer, First Corinthians, 530, notes that “the majority of commentators today” regard verses 34–35 as a later addition. Kim Haines-Eitzen, The Gendered Palimpsest, 62, affirms this of “[n]early all scholars now.”

This is important theologically because the two-dot+bar symbol at the interface of 1 Corinthians 14:33 and 34 provides a resolution to the notorious difficulty of reconciling verses 34–35 with 1 Corinthians 11’s inclusion of women prophesying and chapter 14’s affirmations of  “all” prophesying—verses 34–35 were not in Paul’s original letter, but are a later addition. Therefore, Paul’s unqualified affirmations of the equal standing of man and woman in Christ (Galatians 3:28; Romans 16; 1 Corinthians 7; 11:11–12) need not be qualified by verses  34–35’s huge caveat. Nor must one resort to implausible interpretations of 14:34–35. The twenty-two page article, “Vaticanus Distigme-obelos Symbols Marking Added Text, Including 1 Corinthians 14.34–5” with twelve color photographs, will be downloadable free in September from https://www.cambridge.org/core/journals/new-testament-studies/open-access.

September 18, 2017
"God In Labor" in Christian Theology
Next Post 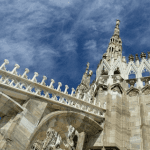 September 18, 2017 Peter Leithart's Defending Constantine
Recent Comments
57 Comments | Leave a Comment
"Curious as to why my comment was deleted? Here it is again for all who ..."
zfari Go Home or At Home?
"From my experiences, a God who has a Gender, a Sex, and a Biological Orientation... ..."
Kyllein MacKellerann What to Say When Someone says ..."
"What is the "final destruction of sin" please?"
Bob Shiloh What to Say When Someone says ..."
"Dr. Fitch, you write the following regarding the resurrection:Of course, Cone is focused on the ..."
J.R. Miller David Fitch, James Cone: Liberation Theology ..."
Browse Our Archives
Related posts from Jesus Creed