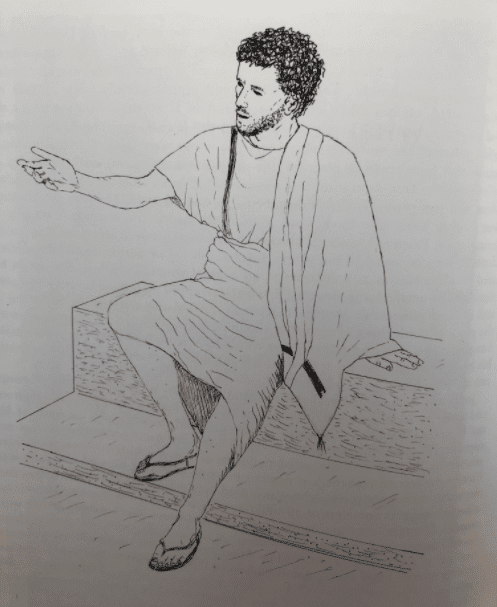 Each of us has an image, perhaps more than one, of Jesus. Most of our images of Jesus are shaped by the history of Christian art. It is perhaps not obvious to everyone that Christian art is not always a good source for history!

(Image from Taylor, reconstructed image of what Jesus looked like if he was average. Figure 76 in her book.)

It matters. Why? Because images matter. Images shape meaning, worship, discipleship. Getting rid of false images — blond hair, blue eyes, long face, Scandinavian Jesus — is as important as having a more reliable image.

Do we know what Jesus looked like? In her new and fascinating book, What Did Jesus Look Like?, Joan Taylor presses the evidence that we have to discover what Jesus looked like according to the earliest and most reliable (and subjected to historical scrutiny) sources. I believe every Christian institution and library has to have this book. Plus, every art department needs a book like this as an example of the history of images.

We begin here: there is nothing about Jesus’ appearance in the Gospels or the earliest Christian records. This diverges at least in some ways from common literature of the day that did describe typical figures who were heroes. If some early Christian records show him to be a god, they show him to look like the gods of the Roman empire — muscular, largely unclothed, short hair, bearded. Why would the Gospels not record anything about his appearance? Is it, as some early Christian sources reveal, because he did not care about his appearance and was not particularly attractive?

After sketching what we know from medieval and closer to our time images she begins to wend her way back into the evidence, with this load-bearing conclusion important to her conclusions:

Christians from the later second century onwards concluded from Isaiah 53:2-3 (LXX) that Jesus was not good-looking. Carpocratian busts of Jesus showed Jesus as a philosopher, probably without idealizing him.

In the third century, Origen responded that Jesus was handsome, and that his particular type of physicality allowed shape-shifting, and could be influenced by the viewer. This notion of a polymorphous Jesus is found not only Docetic or Gnostic texts, like the Acts of John, but also into mainstream Christian ones. In the Acts of John, the types of Jesus that are visualized parallel the types of Jesus in art, though they include the ‘ugly and short’ type no one has yet been able to identify from extant portraiture.

But Celsus also reports about Jewish traditions that Jesus wandered about shamefully, and this cannot be traced entirely to reflections on Isaiah 53. Nothing can be proven, but in these vestiges perhaps we may get a distant image of a man who did not care about his appearance. People could think of him as looking like a vagabond, outside normal society, careless about his clothing, surviving by begging and sleeping rough. How sound this tradition is may be hard to say, but it is not entirely indebted to the Gospels. If we date Celsus’ source to c. 175 CE, we are some 140 years after the time of Jesus. Just possibly, both Jews and Christians had old people among their communities who had stories from their grandparents or great-grandparents told to them in their own youth. At core, the idea that Jesus was not handsome, as Irenaeus and Clement state, may also have some foundation in actuality; there is a difference between being not really beautiful and being ugly. The ugly, short Jesus is a theological development on Isaiah 53; the plain Jesus perhaps not.

If he was a normal 1st Century Galilean Jew …

Overall, then, we can arrive at a general image of Jesus as an average man: he was probably around 166 cm (5 feet 5 inches) tall, somewhat slim and reasonably muscular, with olive-brown skin, dark brown to black hair, and brown eyes. He was likely bearded (but not heavily, or with a long beard), with shortish hair (probably not well kept) and aged about 30 years old at the start of his mission. His precise facial features will, nevertheless, remain unknown.

The evidence would suggest that he did not care what he looked like when it came to clothing.

In order to visualize him more accurately, we can dress him in this clothing appropriate to the times (see Figure 76): an undyed woollen tunic and mantle (a tallith, with tassels in the four corners) and sandals, with another mantle used for warmth (that may have been coloured, as archaeological and art historical evidence shows that bright hues were common). For a Jewish sage, we can look to the third-century portrait of Moses from the Dura Europos synagogue … though in this image there is a curious way of wearing the mantle wrapped around the left arm. Jesus wore clothing that was not fine and likely old. A garment made of one single piece (so John 19:23) is usually associated with simple undertunics or children’s wear.

February 14, 2018
Till Death Do Us Part (Jonathan Storment)
Next Post

February 15, 2018 Creation is Salvation (RJS)
Recent Comments
10 Comments | Leave a Comment
"Avoidance of these verses is at the heart of faulty conclusions. Humanistic interpretations are why ..."
Glenn Harrell What To Say When Someone Says ..."
"I think what you should say is: "I don't want to kink shame, but that's ..."
Spirit Plumber What To Say When Someone Says ..."
"Jesus dying temporarily for our sins doesn't really make much sense. Here's why:Let's say I ..."
C Nault What is a “Sacrifice of Atonement”?
"Any updates on when it will be released???"
Brian Kelly The “Second” Testament
Browse Our Archives
get the latest from
Evangelical
Sign up for our newsletter
POPULAR AT PATHEOS Evangelical
1