The Right To Bear (Such) Arms Is Not Good

My contention is that the right to bear the kind of arms now legal to own and use in the American set of laws is not a moral good.

Kris and I have decided not to support any candidate for office who is against serious gun reduction and sensible restrictions.

Ask Australia about what is a moral good. From USAToday:

Twenty-two years ago, just weeks after the deadliest and last fatal mass shooting in Australia’s history, the country’s then-Prime Minister John Howard made it clear: Australia will not be like the United States.

“I would dread the thought that this country would go down the American path so far as the possession of firearms,” said Howard — at a gun rally.

Each time there’s a mass shooting like the one Wednesday in Parkland, Florida, where 17 were killed at Marjory Stoneman Douglas High School, attention turns to Australia and the changes it made to its gun laws two decades ago.

The country made sweeping gun control measures after a man killed 35 people with a semi-automatic weapon in a popular tourist area of Port Arthur, in Tasmania. Weeks after the April 1996 tragedy, the country and its states began banning rapid-fire guns to tamp down on mass shootings and then offered to buy the prohibited firearms.

The University of Sydney, in a 2016 study published in the Journal of the American Medical Association, found Australia hadn’t experienced a fatal mass shooting — one in which five or more people are killed — since the 1996 shooting. In the 18 years prior, 1979-1996, there were 13 fatal mass shootings in Australia.

About 33,000 Americans are shot per year. More than 8500 have died from these gunshots. [Source] This week the horrific murders of school children and teachers gained all the attention.

Chicago has the strongest gun laws in the nation and those laws seem to have little slowing-down impact. Murderous people, of course, use guns for murder but gun laws can help. 8500 … 33,000! The numbers ought to stagger us but we’ve become numb to the pop of guns, even though they are used for murders.

The issue on this blog post is not to focus just on gun laws but on the idiocy of gun prevalence and gun violence in the USA. We could also discuss why it is that some  get the media attention but not the poor of the City of Chicago. But the issue today is gun violence against other humans. Americans, unlike any Western country, have a culture of gun violence.

James Atwood admits he has been waiting for 36 years, but that wait (for all of us who have been waiting) is now over: What’s he been waiting for? After he buried one Herb Hunter who was killed by a reckless use of an easily-purchased handgun, he’s been waiting for someone to write a book that theologically reflects on guns in America. 30,000+ gun deaths per year in the USA if one combines homicides with suicides by guns. 30,000+. More than the population of the village in which we live. Wiped off the map every year. 30,000+. Where there are more guns, there are more gun deaths. Guns are designed to kill. 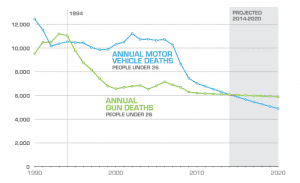 In 2008, 17 in Finland, 35 in Australia, 39 in England and Wales, 60 in Spain, 194 in Germany, 200 in Canada, and 9484 were killed by guns in the USA. Atwood, who owns a gun and is a deer hunter,  was asked about five years ago to speak to the Presbyterian Peacemaking Forum about guns and gospel values and idolatry, and that book is called America and Its Guns: A Theological Exposé. Atwood is more than a concerned pastor; Atwood has been involved with The Coalition to Stop Gun Violence for 36 years. He’s read all the materials; knows the evidence; has been active in the discussion and social struggle; and he has given us a gift. What we need is a balance between the right to bear arms and the right to live in safety. For change to occur, Atwood observes, requires “the leadership of an educated, spiritually aware, and committed community” (xvi).

The Gun Empire, he claims, has a stranglehold on America. He sees gun violence as the elephant in the room no one wants to look at or talk about. He thinks the stranglehold is about the “principalities and powers” and are nourished by death. It is not God’s will that 82 to 84 people die every day as a result of gun violence. The nonsense of the Gun Empire is that guns don’t kill people and that the answer to gun violence is more guns. Atwood thinks his previous strategies — through the federal government and legal process to create better laws —  didn’t work because he was too naive about the NRA’s use of funds to guide legislators. He thinks now that the way forward in gun violence and the way forward against the Gun Empire is to motivate and mobilize the church, the community of faith, to act on its faith. Here is how he says it:

On the moral high ground, with confidence in the rightness of our cause, with indisputable facts at our disposal, and with strong biblical and spiritual resources, people of faith will be able to convince those in Congress and in statehouses to vote for fair and balanced laws that they know in their hearts is the right thing to do.

Asking the “Congress to confront America’s idolatry of guns was asking the fox to guard the chickens.” In fact, as Upton Sinclair put it, “It is very difficult to get someone to understand something when his salary, or his power is dependent on not understanding it.” Whatever the church has done to cajole or convince Congress to take gun safety or control has been outdone by the NRA.

James Atwood, in fact, says he failed to take the Bible and Calvin more seriously. He was too optimistic about Congress and the good will of humans to realize that gun control/safety is more than willpower; it is not just a political issue; it is a spiritual issue; it is about idolatry. This is all discussed in Atwood’s fine book, America and Its Guns: A Theological Exposé. Not long ago we experienced again another godawful event, this time in Texas, where a man was to be served papers of eviction from a home and when the constable approached the house the man inside gunned the constable to death with a [semi-] automatic weapon. He then killed an innocent civilian — and wounded others, some seriously. We should not be saying “people kill people, guns don’t kill people.”

We should be saying, “the only guns that kill people are guns used by humans.” The church should lead the way in exhibiting peaceful approaches to life and conflict, and Christians should lead the way in seeking — at the least — serious examination of gun laws and gun safety and access to guns. How many have to die before this is an issue? How many times to do we have to say America has a gun violence problem? Hear this: “Former NRA executive, Warren Cassidy, … ‘You would get a far better understanding of the NRA if you were approaching us as one of the great religions of the world'” (19-20). For some people, possession and use of a gun is intoxicating, and the intoxicant is power and the control of someone else’s life. But isn’t “idolatrous” too strong of a term?

James Atwood, who has probably thought about gun control as much, if not more, than any American alive today has reflected on this very issue and sees gun idolatry in the following three elements: 1. When an owner [of a gun] believes there are no circumstances when a regulation or restriction for public safety should be placed upon it [the gun/the owner]. 2. When an owner believes that guns don’t kill; they only save lives. 3. When an owner has no doubt that guns preserve America’s most cherished values. He also mentions other elements, like deep emotional attachment to guns, anger when anyone questions gun values, when no preventive measures are supported, show little to no grief for those who have experienced gun violence, vigorously oppose any restrictions of sales of guns, claim an absolute right to use their guns against the government if they consider it tyrannical, claim the blessing of God on the weapon, and believe the solution to gun violence is more guns.

There is a major question we need to ask as a society, but the question will come after a brief listing. It is a listing of violence we Americans are both exposed to throughout culture and which we engage — engage so much companies can make lots and lots of money from us by producing violent images. (By the way, in Europe violent movies create an R rating. Is it the same in the USA?)

Violent images are encountered in the USA in the following contexts:

Next to this set of violent images, what about a language? Big shot, shot in the dark, shoot kill, hit man, open season, shooting for gold, in the cross-hairs, a double-barreled approach… Or our belief that we are a Christian nation, a city on a hill, a chosen people? Do these create justification for violence? Is redemptive violence the way of Jesus?

The question: Is there a connection between these productions of violent images and American violence? Can we connect the dots? Are we more violent because of our images? Would minimizing the images reduce violence? From James Atwood,America and Its Guns: “Violence is a pervasive spirit that touches and affects everything we do and everything we are. … Violence captivates, thrills and fascinates us, and it starts beguiling us early in life…” (43). REPOSTED

February 16, 2018
A Call To Repentance: A Little Encouragement From Clement
Next Post