If Jesus, So You: The Spirit And Jesus And You 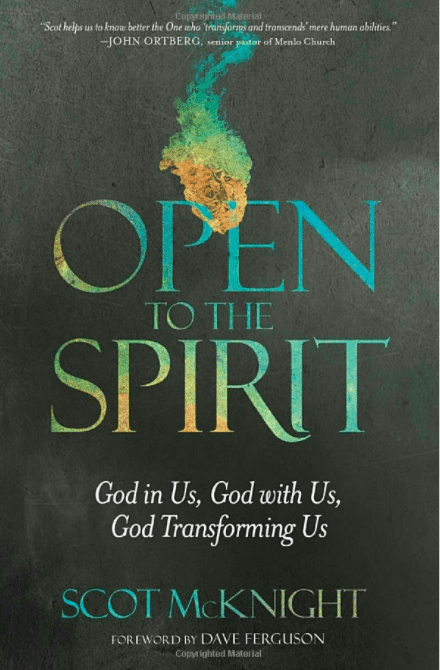 From Open to the Spirit

I contend many don’t really think Jesus needed the Spirit or depended upon the Spirit; I contend, too, that those who think that also don’t think (they may not say so) we need the Spirit.

If with Jesus, so also with us.

The New Testament Gospels are not like the other gospels that didn’t make it into our Bible. For example, there is a story about Jesus as a boy making mud birds in a puddle and then, to dazzle those around him, swished his hands and off the birds went flying. That tale didn’t make the cut. It doesn’t portray the real, human Jesus of the four Gospels.

However, we know that the human Jesus had to learn mathematics; he had to learn the names of friends; and he had to grow in wisdom and knowledge like the rest of us. He also had emotions. In fact, the Gospels let us in on how Jesus felt: he was exasperated, he wept, he wailed, he got angry with other people, and he even cried out in despair. But he also expressed victory and triumph….

Jesus was a real human being, which means he grew Spirit-ually by learning to be open to the Spirit. I know busloads of Christians who deny this was true of Jesus. Other Christians would like it not to be true, so they choose to avoid the truth. Most of us, however, would prefer to not explicitly deny a plain reading of the Gospels. So I’ll say it again: Jesus was human and because Jesus was a human, he needed to be empowered from day one with and by the Holy Spirit. If this is true—and I am about to show how this is found in the Bible—then it is all the more true that you and I need the Holy Spirit. Even more so.

How Did He Pull off the Miracles?

Jesus healed people; he exorcised demons and unswirled a storm at sea. He knew things in people’s hearts before they had expressed what was going on inside. How did he do these things? I will begin with Peter, a disciple who knew because he was there. Peter gave a sermon that was heard by a gentile named Cornelius, who himself had experienced a life-altering vision. In the sermon, Peter said this about Jesus:

You know…how God anointed Jesus of Nazareth with the Holy Spirit and power, and how he went around doing good and healing all who were under the power of the devil, because God was with him.

Peter and others who wrote the New Testament don’t give us a choice in the matter. Jesus, as a human, did all that he did—living, eating, praying, conversing, healing, teaching, doing good, rebuking, defending—by the power of the Spirit.

The highly regarded Wheaton College professor Gerald Hawthorne summarized his study of Jesus and the Spirit in these words: “[T]he Holy Spirit was the divine power by which Jesus overcame his human limitations [such as being limited in knowledge and bound by physical space and human strength], rose above his human weakness, and won out over his human mortality.” Unlocking the doors so the Spirit can come in begins with Jesus, the perfectly wide-open human.

What often has been overlooked needs to be made clear. Every major facet of the life of Jesus is a Spirit-event. So much so that we need to see that the more Christlike we become, the more Spirit-ual we become. Again, the closer our Spirit-uality gets to Jesus, the more dependent on and empowered by the Spirit we will be.

The Gospels of Matthew, Mark, and Luke open with the baptism of Jesus: “As soon as Jesus was baptized, he went up out of the water. At that moment heaven was opened, and he saw the Spirit of God descending like a dove and alighting on him.” This same event is described by John:

John saw the Spirit descend on Jesus. He knew the Spirit-anointed Jesus would have a perpetual filling of the Spirit and would go about plunging people into the Spirit.

A window was opened into the Spirit-prompted religious experience of Jesus, which is captured in the word Abba:

As soon as Jesus was baptized, he went up out of the water. At that moment heaven was opened, and he saw the Spirit of God descending like a dove and alighting on him. And a voice from heaven said, “This is my Son, whom I love; with him I am well pleased.”

When the Father announces that this Jesus is God’s very beloved “Son,” Jesus knows from those words that God is his special, loving Father. This event was an epochal moment in Jesus’s spirituality. From this point on, Jesus will be known as Son and he will teach his followers to call God “Father.”

To call God “Father” ushers us into an intimate relationship with God, and it is one that Jesus himself knew personally. How so? Jesus’s reference to God as his Father shows the trust of Jesus, the intimacy of Jesus with God, and the interactive relationship of Father and Son in the life of the man Jesus. This is a Spirit-ual reality because it was when the Spirit came upon Jesus that this reality was announced to the world.

When Did God Unleash the Spirit?

We can back up thirty years from his opening-day sermon to the events surrounding his birth. With Jesus’s arrival, God unleashed the Spirit afresh on earth. To Elizabeth, mother of John the Baptist, the angel revealed that her son would be “filled with the Holy Spirit” and would “go before the Lord in the spirit and power of Elijah.” The same angel let Mary know that she would become pregnant when the “Holy Spirit will come on you, and the power of the Most High will overshadow you. So the holy one to be born will be called the Son of God.” When Mary went to visit Elizabeth, we are told “Elizabeth was filled with the Holy Spirit.” Then her silenced husband enters the story: “His [John the Baptist’s] father Zechariah was filled with the Holy Spirit and prophesied.” We are told, too, that John lived in the desert and “became strong in spirit.”

One more. When Mary and Joseph took Jesus to the Temple to dedicate him and offer their sacrifice for their son, an old man named Simeon grabbed the baby and sang a praise song. God had finally, finally sent the Messiah to Israel. But before Simeon sang and before he grabbed the baby, Luke made it clear to his readers that “the Holy Spirit was on him.” It had been revealed to Simeon “by the Holy Spirit that he would not die before he had seen the Lord’s Messiah.” The old man was “moved by the Holy Spirit” to go into the Temple to meet the Messiah and his parents.

The Days of the Spirit Unleashed

It is customary to date God’s unleashing of the Spirit at Pentecost (see Acts 2). But Luke, who ought to have known since he wrote Acts as well, presents the days leading up to Jesus’s appearance on earth as a special unleashing of the Holy Spirit on the principal people in the story: Elizabeth and Zechariah, Mary and Joseph, Simeon and Anna, and most especially John the Baptist and Jesus.

Each was empowered by God’s Spirit. John Levison, professor at Perkins School of Theology at Southern Methodist University, has researched the Holy Spirit in the ancient world more than almost anyone else. At the end of his lengthy academic study, Filled with the Spirit, Levison concluded: “God breathes into every individual a spirit that can be filled with understanding, a spirit that rolls over the tongue in a flood of peculiar eloquence, a spirit that can be the locus of holiness or, under the care of the careless, a commodity to be traded for lucre.”

Jesus was the Spirit-filled human among humans. Was he different from us? Not in his need for and dependence on the Spirit, except that he was always wide open and we are not. I agree with former Wheaton College professor Gerald Hawthorne, when he wrote that Jesus “needed the Spirit’s power to lift him out of his human restrictions, to carry him beyond his human limitations, and to enable him to do the seeming impossible.” With Jesus a new age has begun, the Age of the Spirit. If Jesus could do his ministry only by the power of the Spirit, and if special but ordinary humans such as Elizabeth and Mary and Simeon could do their ministries only by the power of the Spirit, then you and I especially need to be more and more open to the Spirit.

To be a follower of Jesus is to be open to the same Spirit to whom Jesus was wide open. The good news is that the Spirit at work in Jesus is available to us.

Are you open to the Spirit as Jesus was open?

If you are open to the Spirit, you will hear from God. Why? Because every page of the Bible tells us our God is a God who speaks. God may speak in a variety of ways, but these are true: God has spoken, God is speaking today, and God will continue to speak. It begins when we see Jesus himself as the Speech of God.