Problems with the Prophets (RJS)

What does it mean to claim that the prophetic literature is authoritative, inspired, and inerrant (if you like that word)?

Does it mean that the named prophet (say Amos) wrote a book now included in our Bible?

Does it mean that the named prophet (say Isaiah) personally proclaimed all of the oracles contained in a given book of our Bible?

Do the interpretations of the apostles and evangelists in the New Testament represent the intended meaning of the original human speaker?

Many concerns have been raised when it comes to the prophets. The book of Isaiah appears to contain the work of more than one speaker. A skeptic claims this undermines the truthfulness of Scripture and thus its authority for our faith. Many conservative Christians double down and defend the book as the work of one man in order to defend Scripture and shore up the foundations of our faith.

But is this really a hill to die on? 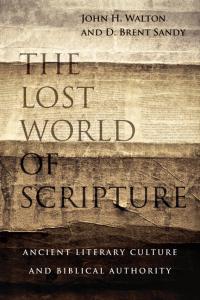 In the Lost World of Scripture John Walton and D. Brent Sandy dig into the concerns raised by the prophets. To begin with they consider the ancient cultural context of the prophets. John and Brent write:

The prophets whose oracles are collected into literary compositions differ from what is found in the ancient Near East in that they address the people more than the king and tend to take an adversarial position toward the administration, in contrast to the ancient Near Eastern prophets whose oracles tend to support and even legitimate the king. Despite this counter cultural role in Israel, a few of the prophets over the centuries came to be recognized as authority figures significant enough that their oracles were collected and woven into literary compositions. We should note that there were many prophets operating in Israel in all periods of the monarchy, … Only a select few had their oracles preserved. (p. 325)

The ancient world was not fixed on books and authorship. There were authority figures, disciples, and predominantly oral communication. This reality impacts books we have today. John and Brent do not care to defend any particular proposal concerning the authorship of any particular book but to explore the range of possibilities consistent with the authority of Scripture. First most of the books are compilations recorded by scribes or disciples. There is no record of prophets writing books and only a few records of specific written documents. The prophetic oracles recorded in Scripture were generally oral proclamations. The dominant oral nature of the prophecies plays an important role in the range of possible forms for the books we have.

Isaiah is a good example for our consideration. Isaiah did not write a book – he was an eighth century prophet speaking into current events. Like most of the other prophets in Scripture he spoke to the people and confronted the powers of the land. He may well have had disciples who recorded his words and followed in his footsteps. They may have carried on his work following his death. The book we have as Isaiah could report both the words of Isaiah and of his followers. This wouldn’t make the book any less authoritative or inspired.

If the community of faith decided that disciples of Isaiah wore his mantle and carried the extension of his authority, they could readily append the oracles of the Successors to the work of the master. If they did so, we can accept that judgment and view the texts in that way. This would not be a case of deception, hoax, pseudepigraphy or anything else shady. If such an extension occurred, we would not be surprised that there is a degree of literary continuity (they are his disciples); nor would we feel constrained to believe the master was the originating authority behind the full set of oracles. He is the authority figure behind that stream of tradition. (p. 226)

There is nothing inherently wrong with the possibility that Isaiah is a compilation of spoken oracles by Isaiah and his disciples. This does not undermine the authority or truthfulness of Scripture. The authorship of Isaiah is not a hill to die on. The words of one, two, or more prophets may be compiled in the book we have. This is not something we, as confessional readers, need to get hung up on.

John and Brent summarize the implications of inerrancy (they do seem to like that word) as we read the prophets:

There is much more that could be discussed. John and Brent consider the ways in which the New Testament authors use the prophets as well as the questions raised by the book of Daniel. John and Brent argue that the New Testament authors (apostles and evangelists) carry their own authority. They may read new meanings into the Old Testament writings and this shouldn’t concern us. Nor does it provide a model for our interpretation – we are not inspired as they were. Here again inerrancy must be properly considered.

With regard to the apostles, the inerrancy of their proclamations of fulfillment cannot be falsified. Since we believe that the apostles have authority, we accept their identification of fulfillment. Inerrancy would not relate to whether the fulfillment matched what the prophet had originally said because such exposition is not the role of the apostle and not necessarily his intention. (p. 230)

Finally, it is possible, as some suggest in Daniel, that oracles speaking of the past as though it were the future (vaticinu ex eventu “speaking after the event”), are found in Scripture. The mere suggestion does not undermine the authority and truthfulness of Scripture. Genre is an important consideration here.

We can only say that if by virtue of a recognized genre (like vaticinu ex eventu) a book spoke of the past as the future, we could not invoke inerrancy to claim otherwise. Much work would still have to be done to make such claims, but the issue itself is not truly in the purview of inerrancy. If vaticinu ex eventu was recognized as a legitimate genre, authority would be viewed in light of the conventions of the genre. (p. 232)

John and Brent do not dig deeply into the questions surrounding the authorship of Isaiah or Daniel or any other book. Resolving such questions is not their concern. And, indeed, the questions may not be ultimately resolvable based on current information. This shouldn’t really worry us much.

The running theme in The Lost World of Scripture is that the authority lies in the intended message of the communication. It is not subject to our imposed expectations of genre or our so-called “acceptable” forms of truth-telling. If ancient Near Eastern genres and conventions are used to convey the truth about God, his interaction with his people, and his plan for the world … well then, this is not a cause for concern and it certainly is not a hill to die on. We should study Scripture and seek to discern the genres and conventions to best understand the message contained within. For the most part this is quite clear. It only really gets cloudy when we also add constraints arising primarily from our modern expectations and refuse to let Scripture itself be our guide.

What are the most significant questions raised by the prophetic books of the Old Testament?

How does inspiration (or inerrancy) impact your understanding?

What is the intended message?

July 18, 2018 What If We Answered Jesus' Questions
Recent Comments
8 Comments | Leave a Comment
"Curious as to why my comment was deleted? Here it is again for all who ..."
zfari Go Home or At Home?
"From my experiences, a God who has a Gender, a Sex, and a Biological Orientation... ..."
Kyllein MacKellerann What to Say When Someone says ..."
"What is the "final destruction of sin" please?"
Bob Shiloh What to Say When Someone says ..."
"Dr. Fitch, you write the following regarding the resurrection:Of course, Cone is focused on the ..."
J.R. Miller David Fitch, James Cone: Liberation Theology ..."
Browse Our Archives
Related posts from Jesus Creed