Book of Revelation: Future, Timeless, or Past? 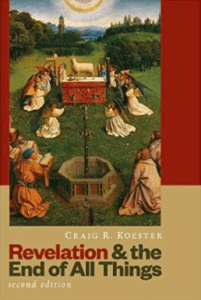 How the church has read Revelation is the focus of Craig Koester, Revelation and the End of All Things, chapter one.

Take the millennium in Revelation 20.

Rev. 20:1   Then I saw an angel coming down from heaven, holding in his hand the key to the bottomless pit and a great chain.  2 He seized the dragon, that ancient serpent, who is the Devil and Satan, and bound him for a thousand years,  3 and threw him into the pit, and locked and sealed it over him, so that he would deceive the nations no more, until the thousand years were ended. After that he must be let out for a little while.

Rev. 20:4   Then I saw thrones, and those seated on them were given authority to judge. I also saw the souls of those who had been beheaded for their testimony to Jesus and for the word of God. They had not worshiped the beast or its image and had not received its mark on their foreheads or their hands. They came to life and reigned with Christ a thousand years.  5 (The rest of the dead did not come to life until the thousand years were ended.) This is the first resurrection.  6 Blessed and holy are those who share in the first resurrection. Over these the second death has no power, but they will be priests of God and of Christ, and they will reign with him a thousand years.

Rev. 20:7   When the thousand years are ended, Satan will be released from his prison …

Many have read this as yet to come. Koester mentions Justin Martyr and Irenaeus, who anchored such beliefs in scripture, in creation, and in justice.  Montanus along with Priscilla and Maximilla took this millennialism and argued — as thousands have done since their day — that future was imminent. Moderate like Justin and Irenaeus, Victorinus wrote the first commentary on Revelation in which he saw Nero and Rome. He also said Revelation is not a step by step plan into the future but a repetitive cyclical type of book.

Jerome edited Victorinus and argued against his view by saying the book was about timeless truth. He was not the first to do so. The battles are spiritual, the victories are spiritual. Tyconius argued in the 4th Century that the 1000 years was the church age. Thus Revelation 20:2 parallels Matthew 12:29 when Christ bound the evil one. Augustine adopted Tyconius’s view. The millennium then is a way of talking about time as a totality.

Koester turns toward explicit identification of images/names/figures in Revelation with specific people — some in the past, some recently in the past, some on the world’s stage at the moment. He canvasses Joachim of Fiore and radical Franciscans, Martin Luther (who was against it, then used it to identify people, then generalized it to more about encouraging faith and endurance), and then leaps into the church tradition where Revelation was either more premillennial (millennium comes after tribulation) or postmillennial (progressive improvement leading to millennium, e.g., Jonathan Edwards and Charles Finney).

Then to the Pre Mill Pre Tribbers in dispensationalism and their distinctive emphasis on the Rapture. Starting with JN Darby then to CI Scofield (of Scofield Bible), Hal Lindsay, and now Jerry Jenkins and Tim LaHaye. Big here is a distinction between Israel and the church and the use of Daniel 9:20-27’s 70 Weeks. (There are at least 2000 years between Dan 9:26 and 9:27.)

Why is this view so attractive, besides its evocative-enviable capacity to adapt to every new major event in history?

So why do many people find this system appealing? One reason is that its ominous view of coming events corresponds to perceptions that the world is sliding into increasing violence and moral decay. Terrorist threats are relentless, and modern military technology has created a situation in which nuclear holocaust seems inevitable. In the face of these threats, however, the dispensationalist system assures its adherents that God is in control. Things may seem chaotic, but they are not. The faithful can be assured that God s purposes will be carried out. The teaching about the rapture also holds out the hope that those who come to faith now will escape from the earth before the horrors of the end-times are unleashed.

A second reason this system is appealing is that it gives the sense that people can anticipate how God s purposes will be carried out, step by step, by following the script that has been pieced together from various verses of Scripture. This aspect has encouraged popular attempts to use the system as a framework for interpreting world events. The formation of the modern state of Israel in 1948 and the Israeli capture of east Jerusalem in 1967 led many to believe that God was divinely protecting the Jewish nation, and that with each passing decade conditions are emerging in which the temple might be rebuilt on its ancient site, where the Dome of the Rock now stands. Russia’s political and military maneuvering and recurring conflict in the Middle East all find a place in the scenario.

Because this view is so popular and because lay folks easily express its views, Koester pauses to criticize this view:

First, the system has a mechanistic view of prophecy fulfillment that is foreign to Revelation. … Second, neither Daniel nor Revelation refers to the rapture. … Third, the sharp distinction between Israel and the church is not warranted. … Finally, the system confuses the literal and the symbolic.

Next week, the turn to a more historical view of reading Revelation.

August 27, 2018
There's More Than One Verse in the Pro-Life Hymn
Next Post