Then Jesus came to them and said, “All authority in heaven and on earth has been given to me. Therefore go and make disciples of all nations, baptizing them in the name of the Father and of the Son and of the Holy Spirit, and teaching them to obey everything I have commanded you. And surely I am with you always, to the very end of the age.” Mt. 28:18-20 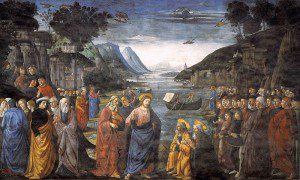 All authority in heaven and on earth has been given to Jesus. Quite the encompassing statement! There are a number of other references in the Gospels to the authority with which Jesus spoke, his authority to forgive sins, to command demons.

I am updating, editing, and reposting a series on biblical womanhood. The first post (A Look a Biblical Womanhood) considered the stories of women of the Old Testament. The second post (Women of the New Testament) summarized many of the women of the New Testament. The range is impressive. These range from the “expected” roles of wife and mother to judge, prophet, builder, business women, evangelist, one-on-one teacher, witness, student. We can argue, as someone does any time the topic is raised, that a woman is a prophetess rather than a prophet – but it doesn’t appear to be a difference in role, calling, or office, rather it is a distinction of gendered language.

But any discussion of biblical womanhood in the evangelical church today will eventually come to the issue of authority, specifically human authority. Someone will point to 1 Timothy 2:12 … “I do not permit a woman to teach or to assume authority over a man; she must be quiet.” Much has been made over the word “authority” in this verse, extending far beyond leadership in the church.

What does the New Testament teach about authority? 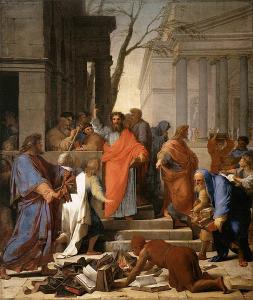 Paul was a marvelous Christian leader. But he was only a man, as he well knew.

For when one says, “I follow Paul,” and another, “I follow Apollos,” are you not mere human beings? What, after all, is Apollos? And what is Paul? Only servants, through whom you came to believe—as the Lord has assigned to each his task. I planted the seed, Apollos watered it, but God has been making it grow. So neither the one who plants nor the one who waters is anything, but only God, who makes things grow. The one who plants and the one who waters have one purpose, and they will each be rewarded according to their own labor. For we are co-workers in God’s service; you are God’s field, God’s building. … So then, no more boasting about human leaders! All things are yours, whether Paul or Apollos or Cephas or the world or life or death or the present or the future—all are yours, and you are of Christ, and Christ is of God. Cor. 3:5-9, 21-23 (and more of the section from 1:10-3:21)

He taught with authority. But he was not an authority. Any legitimate authority in his teaching came/comes from God, and from his Son, Jesus the Christ. He had a responsibility and a calling that was to be faithfully carried out, a race well run. But he was not in authority. Nor were Peter or James. They all stood before Jesus Christ as the authority. Paul was given authority – to build up, not to tear down (2 Cor. 10:8, 13:10); but again, a gift for the purpose of service to others. Paul exercises his authority by teaching and cajoling and reasoning … not by demanding obedience or loyalty.

But the most pertinent teaching on human authority comes from Jesus –

Jesus called them together and said, “You know that the rulers of the Gentiles lord it over them, and their high officials exercise authority over them. Not so with you. Instead, whoever wants to become great among you must be your servant, and whoever wants to be first must be your slave— just as the Son of Man did not come to be served, but to serve, and to give his life as a ransom for many.” (Mt 20:25-28; also Mk 10:42-45, Lk 20:24-27)

The Gospel of John puts the point across in a different way, with an enacted message:

After that, he poured water into a basin and began to wash his disciples’ feet, drying them with the towel that was wrapped around him. … When he had finished washing their feet, he put on his clothes and returned to his place. “Do you understand what I have done for you?” he asked them. “You call me ‘Teacher’ and ‘Lord,’ and rightly so, for that is what I am. Now that I, your Lord and Teacher, have washed your feet, you also should wash one another’s feet. I have set you an example that you should do as I have done for you. Very truly I tell you, no servant is greater than his master, nor is a messenger greater than the one who sent him. Now that you know these things, you will be blessed if you do them. John 13:5-17

Servant leadership gets a bad rap at times … it means you, o “leader”, should do whatever I want, right? But this isn’t what it means. It means looking out for the best for others, putting the needs of others first, forgoing the “privileges of rank.”

Paul’s letter to the Philippians is particularly relevant here. When I wrote on this topic the first time a commenter brought it to our attention.

[A]s you point out, Jesus’ instructions in Mt. 20, 23, indicate that there is not to be any real hierarchy among his people.

I think this is very much the case with elders/bishops. The leader is to be the one who serves; who follows the pattern of Christ in Phil. 2:6-8 (cf. 1Pet. 2:21-25). Interestingly, the one time Paul specifically addresses bishops and deacons is in the Philippian letter – which means they are called specifically to emulate the descending humility, self-emptying and humiliation of the cross. There is no domination, no power over, no coercive action associated with Phil. 2:6-8. It’s purely emptying self, entering the world of another, and serving their best interests through complete sacrifice – even to the point of suffering shame. This downward direction is everything, imo. It completely eliminates power. It is a beautiful gift from God but also the calling for all – so that we elevate the other in importance (Phil. 2:4-5).

Philippians 2:1-11 is a powerful message on the nature of Christian leadership and “authority.”

Many years ago I attended a high school weekend retreat at the local denomination camp. The speaker was a charismatic man … a powerful speaker (I have no idea today who it was). I came home inspired, and talked with my parents about the message. How we as Christian youth were called to obey and serve our parents. Their needs and wants came first. Our time would come when we were adults with families of our own. This was God’s ordained order of things! To my surprise, my parents immediately and completely disagreed. Their responsibility as parents (servant leaders) was to see to our best interests, even when it meant self sacrifice. Proper parental “authority” is a gift of service. The same with other forms of Christian leadership and authority.

It seems to me that the assumption of or desire for authority … has been at the root of many of the most egregious failings of the Christian church and especially the conservative evangelical church. I find authoritarian churches, authoritarian structures within churches, and authoritarian leaders, male or female, quite frankly, scary. I could name some here, but this isn’t really the point. Human “authority” is, by its very nature, frail and subject to abuse. All authority is given to Christ alone. We follow Christ alone. Any authority we have is a gift from God to serve others. This is not the way the world thinks – but it is the way we as Christians are called to think and act.

We have one Teacher and we are all brothers and sisters before him.

A Lenten meditation on the death...
Anxious Bench
Related posts from Jesus Creed