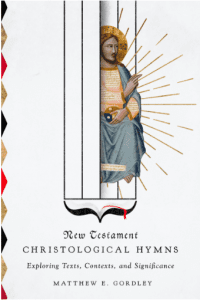 From the very beginning of the church singing was important to the fellowship. From that same beginning their songs were like the songs of the Greco-Roman world and the Jewish world — but first…

Col. 3:16 Let the word of Christ dwell in you richly; teach and admonish one another in all wisdom; and with gratitude in your hearts sing psalms, hymns, and spiritual songs to God.

Eph. 5:19 as you sing psalms and hymns and spiritual songs among yourselves, singing and making melody to the Lord in your hearts,

1Cor. 14:26   What should be done then, my friends? When you come together, each one has a hymn, a lesson, a revelation, a tongue, or an interpretation. Let all things be done for building up.

James 5:13   Are any among you suffering? They should pray. Are any cheerful? They should sing songs of praise.

We are reading through Matthew Gordley, New Testament Christological Hymns.

What can we learn about hymns in the Greco-Roman world?

First, as hymns outlined the deeds, accomplishments, and characteristics of the gods in poetic or elevated style, they invited the listener or worshiper to embrace a particular view of how the divine and the human worlds engage one another. They thus played a role in passing on values and in teaching, even as they offered praise of the divine.

Second, this passing on of values, teaching, and other worldview dimensions was not simply a rational, cognitive process, but also an emotional, affective one. Through painting a picture of reality, and inviting listeners into the imaginal world of the hymn, listeners not only heard content but also were ushered into an experience of the numinous.

Third, and related, hymns carried a particular weight and authority of their own, as hymn writers often claimed (or sought) divine inspiration for their work and also drew on established traditions in their compositions. These conventions conveyed a sense of grandeur and conferred intrinsic authority on a hymn in a way that differed from other genres such as narrative or epistle. There was a conventionally accepted way to compose a hymn, and when done right a hymn conveyed something that other genres could not.

Finally, hymns often addressed not only spiritual or religious matters but also issues of political importance, including human rulers and authorities. In this way hymns both carried on the tradition and served as vehicles for innovation. The visions of the divine conjured up by poets included within their scope the god-ordained rulers of the Roman Empire: this was an innovation, but one that was fully backed by the revered tradition of hymnic praxis.

What about Jewish hymns?

Early Christian hymns do not necessarily allude to early Jewish psalms and hymns as much as they derive from the same milieu and share many of the same dynamics. Early Christian hymns are less connected to Jewish psalm contents and more deeply connected to the living practice of psalm composition. Thus the purposes and the use of psalms in early Judaism are important to consider. Far more than simple expressions of praise to God, or even the expression of theological beliefs in verse form, psalms and hymns manifestly inscribe key values of the authors and their communities, providing a vehicle for deep reflection about the traditions of the community and how these are to be understood in light of the community’s current circumstances. These kinds of considerations are then shared with the community through the medium of psalmody in ways that facilitate both an acceptance of these ideas (they are put forward in a way that connects with the head/intellect and the heart/emotions) and a collective sense of perspective that helps to shape the community’s understanding of itself in light of this particular interpretation of the tradition.

In contrast to Greek and Latin poetry, Hebrew poetry was marked not by any special meter, but rather by its construction. Specifically, Hebrew poems use parallelism of a variety of kinds, as well as grammatical constructions and vocabulary that show that they are elevated in style.

Early Jewish psalms and hymns often indicate that they have a didactic function in addition to, or even more so than, merely communicating praise or petition to God. Didactic function, in this context, refers to the ways in which the psalm addresses the human audience, in addition to the divine, and offers a way of viewing the world, a way of understanding the community’s present circumstances, and at times, a desirable set of responses to those circumstances.

Some early Jewish hymns, like their predecessors in the Hebrew Bible, show an implicit, and at times explicit, concern for resistance to other grand narratives about reality that may have a claim on the lives of the community members.

Sooooooo … “From Homeric Hymns to Solomonic psalms, from Greek poems to Jewish Wisdom texts, from the praise of gods to the praise of divine agents, it is evident that hymns provided ancient poets a way of expressing their understanding of ultimate, unseen realities and the significance of those realities for the lives of their hearers or readers. In addition to simply praising the divine, hymns were a powerful medium of instruction, promotion of values, and shaping of worldviews for the human audiences that encountered them.”

December 19, 2018 Born Is The King of Israel
Recent Comments
0 | Leave a Comment
Browse Our Archives
Follow Us!