Why do people doubt science? (Above is the view I am enjoying this week – hard at work at a conference.)

People find many reasons to question authorities – scientists, pastors, priests, presidents. The issues are often similar, but not identical. In particular I have long been interested in the reasons religious people (especially evangelical Christians) question scientific consensus. As a group, we are not “science deniers” or at least most of us are not. Yet even David Fitch recently posted on Facebook:

There was a time when evangelical fundamentalism dismissed and defended against modern science. This led, in my opinion, to a opposite reaction within evangelicalism to embrace modern science, evolution, modern psychology, medical advances, etc. We see it in movements as diverse as creationist science and BioLogos. IMO this reaction led often to a naive acceptance of science as too readily objective and determinative in moral and social issues. Science often (subtly) becomes an equal with the Bible. And yet it has been proven over and over (since Foucault at least) to be the captive of ideology. This is why I teach, not to dismiss modern science, but discern discern discern modern science, where its conclusions are coming from, where it illumines, where it merely plays to a political agenda. 🙂

I agree with much of what David says – although I bristle at his characterization of BioLogos. His implication seems to be that it arose as an “opposite reaction,” i.e. a reactionary embracing of evolution. As an expert, this isn’t my impression of BioLogos. Rather, it arose out of expertise. A core of scientists who are also Christians have found this an important topic to pursue. Others with expertise in theology, biblical studies, and philosophy have joined the effort. We agree that discern, discern, discern is very good advice. This is why we have come together to address the issue of evolution; its implications and its compatibility with Christian faith. We endeavor to build trust and make the case. The fundamental idea of the gradual development of the diversity of life over hundreds of millions of years is incredibly well supported by the data. Aspects of the mechanisms and pathways are still being discovered, debated, and revised, but these details are insignificant when it comes to the interface with Christian faith.

But, David might be surprised to know that the issues he brings up are also of concern within the scientific community. An opinion piece in an on-line magazine The Scientist came across my inbox Monday: Opinion: What You Believe about “Science Denial” May Be All Wrong.  The author,  Kari Fischer, was one of the organizers of a conference dealing with so-called science denial. In this opinion piece she summarizes 6 take-away messages. The following is a quote – although I’ve shortened as indicated by the ellipses.

Engender trust and ridicule will not foster trust … a message we would all do well to remember; especially as Christians aiming to spread a message within our communities and the world. We have lost the trust of much of surrounding society for unfortunate reasons. This is too big to dig into here and is largely independent of science and its relationship with Christian faith.

Back to David Fitch’s comments. Science – an ambiguous and broad designation – is not equal with the Bible. Scientists, when acting as scientists using the tools of science, address questions that are quite different from the central questions addressed by the Bible. We would all do well to also remember this. 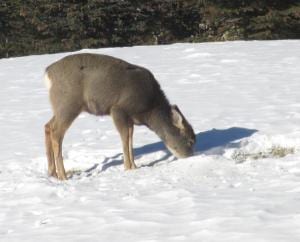 Science is far too often viewed as “readily objective and determinative in moral and social issues.” The history, and even some current examples, can be cited as clear repudiation of objectivity in moral and social issues. “Science” has been co-opted to support among other things, racism, eugenics, and the selective abortion of “defective” infants. Richard Dawkins was never a trusted authority in my book – but when he argued a moral imperative for the abortion following an in utero diagnosis of Down’s syndrome (see one story in The Guardian)  he epitomized the problem. His opinion was moral, was his own, and was not science. The possibilities introduced by new capabilities in gene editing raise concern – as does the willingness to discard members of society for reasons of health, age, and national origin. As Christians, our society encompasses the entire world – all are neighbors. There are many important questions where our input is essential.

David Fitch recommended that we “discern modern science, where its conclusions are coming from, where it illumines, where it merely plays to a political agenda.” The down side to this excellent advice is that it can be used as an excuse to dismiss the conclusions we don’t like. Discernment is hard work and requires an openness to challenging conclusions. I am open to genuine evidence that undermines the basic evolutionary model of development over deep time. So far I haven’t seen any.

Perhaps it is time we move on to more important issues.

How can we engender trust?

February 12, 2019
Whiteness, Race, and Slavery in the USA
Next Post

February 12, 2019 Love and Lent
Recent Comments
12 Comments | Leave a Comment
"Avoidance of these verses is at the heart of faulty conclusions. Humanistic interpretations are why ..."
Glenn Harrell What To Say When Someone Says ..."
"I think what you should say is: "I don't want to kink shame, but that's ..."
Spirit Plumber What To Say When Someone Says ..."
"Jesus dying temporarily for our sins doesn't really make much sense. Here's why:Let's say I ..."
C Nault What is a “Sacrifice of Atonement”?
"Any updates on when it will be released???"
Brian Kelly The “Second” Testament
Browse Our Archives
get the latest from
Evangelical
Sign up for our newsletter
POPULAR AT PATHEOS Evangelical
1

Evolution Can’t Account for Our Inborn Longing for...
If you asked any group of people what they want out of...
view all Evangelical blogs
What Are Your Thoughts?leave a comment
Copyright 2008-2021, Patheos. All rights reserved.