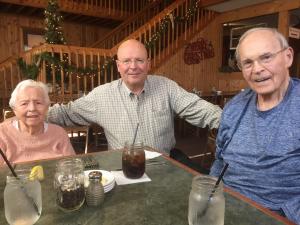 My father, Alex McKnight (1928-2019), wore many shoes and not just the leather kind. He did have in his closet some white bucks and some blue suede shoes and some chukka boots but seemed to like his wing tips the most. Many shoes, however, also describes my father’s loves and life.

My father was married to my mother, Lois, for more than 68 years. He was a steady consistent Christian witness and wonderful example to his family (us) and all who knew him.

My father lived a long, good life, all of it in the same direction.

He loved to read, and often quoted poetry when we were younger. He read far more after his retirement when he had more time. As his dementia began to settle in he read all sorts of books but, well, he didn’t remember what he had read. Once we gave him a long biography of Grant, to which he said, “I may have read it but I’ll read it again because I don’t remember what I read before.”

My father grew up in southern Illinois, the son of a Scottish born coal miner. The family was Pentecostal Holiness, which my father never quite took to. They lived south of Johnston City a couple miles on what I recall as a cinder road, along which ran an open sewage ditch. The area was called Vinegar Hill, and it was hardened with clay and made adventurous for me as a child because of its open fields and forests with an occasional pond. Next door to my grandparents was my father’s brother and his family and next to his brother was his sister with her family.

That history gave my father a joy – a hard-working joy – in gardening and with my mother they canned and froze and bottled so many fruits and vegetables that they ended up giving much of it away. Which brings me to the table, where my mother loved to host people and my father loved to sit and tell stories all evening. Storytelling was something he acquired on Vinegar Hill.

As a teenager my father built a basement under the already existing house, and my grandfather – again, if I’ve got the facts right – put in the cement. I remember the basement as a long way from square or level, but it was a basement built by my dad. He grew up in the Great Depression and, as the oldest of the children, hunted and fished for food for the family.

He served in the US Army, though he rarely spoke of it and I think he served in Texas. After which service he played minor league baseball one summer for the St Louis Browns, was offered a contract with the Yankees but turned it down because his father asked him to go to college – and he was the first (and only) in the family of six children to graduate from college. He worked his way through Southern Illinois University by creating a cleaning business, eventually obtained a master’s degree in education and taught at Dahlgren Illinois and then Roodhouse before being offered a teaching post in Freeport where he spent the rest of his career – first teaching English and Speech, about which he told hilarious tales, and then becoming a driver’s education teacher, about which he also regaled us with stories. Both Kris and I were taught how to drive by my father.

One of his caregivers recently said this. In the room she said something about “Mr. McKnight” and my sister said, “You can call him ‘Alex’.” She said back, “He was my driver’s ed teacher so he’s ‘Mr. McKnight’ to me.” That’s my dad to thousands.

Now some more “shoes” he wore. My father loved sports, not just watching them, but coaching them. He coached football, basketball, and track and field. When he started the Cross Country program at Freeport he quit football and basketball to focus on Cross Country and Track. I ran on the Cross Country team and high jumped and did other events for my father. My interest in those sports all began as a youngster traveling with my father to the track meets in Rockford and elsewhere. Those were the days, my friend, I thought they’d never end.

I called my father “Coach” from teenage years well into my 40s and 50s. He will always be my coach.

My father liked, make that “loved,” to fish for bass with top water lures and to catch the occasional rainbow trout, to hunt for quail and pheasant and rabbits and I recall once his joy over getting a grouse.

He liked to do crossword puzzles and was as good a counted cross stitcher as I have ever seen.

One of my father’s greatest joys was teaching Sunday School class. Once, when I was about 10, I entered the living room in our home to fold newspapers at about 4:30am to find my father on his knees in prayer after he had spent time reading the Bible. His daily study of the Bible led to teaching the Ambassador’s Sunday School Class at First Baptist Church, which he must have taught for nearly thirty years. His theology was a common brand of dispensationalism with some touches of his favorite Calvinists, Andrew Bonar and Jonathan Edwards, whose famous sermon he at one time read publicly in his English classes. He and my mother sometimes attended Moody Founder’s Week, where he heard sermons and bought books for his next year of Sunday School class. During the last time Kris and I saw my dad in earthly terms my mother asked me to take his Bible and open it up and shake all the notes from it. She said, “His Bible is like a file cabinet.” It was … I shook it and stuff fell to the bed from everywhere. I have his Bible, notes on most every page of the Bible, all in his aged handwriting, always in capital letters.

Speaking of church, my mother was quite often the choir director at church and she would sing with the best of them. My father, too, could sing and was always a member of the church choir. I remember his singing a solo one time.

My father loved people – all sorts: he seemed to know the names of all the children in his church, the young couples, the leaders, well, nearly everyone. He referred to so many people in glowing affirming terms. One of the memories of my children comes from my daughter’s wedding in Hawaii. Daily my dad walked from the hotel to the beach where he had discovered some benches. He’d sit there and strike up a conversation with anyone willing to chat for a spell, or longer, at least until one of us found him.

All this and more will be on my mind whenever I think about the life my father lived. He made it to 90 but in his last months developed a nasty ulcerated infection that was too much for his weakened heart and body to ward off. As his mind was beginning to fade he would occasionally wake up and say funny things that made no sense except to those of us who knew him, and for us they made sense because they sounded like him. The doctors kindly dosed him with morphine so he would exit the stage painlessly, even if it meant he no longer had an appetite or alertness. Kris and I saw my father on Good Friday before his death, and we watched a hospice care nurse treat him with glorious respect and dignity. She bathed him and shaved him and put lotion on him. We were so thankful his body was treated so respectfully.

My father loved me and my two sisters the way anyone his age loved their children: with all his being and life and provisions, and spoke glowingly about us most often when we were not in his presence. He would occasionally call me to ask some theological or biblical question, and I’d tell him what I thought and sometimes he’d say, “Well, I’ll have to think about that some more.” He read most of the books and rarely said more than “Scot, that was a good book. I learned a lot.” That meant a lot then and still means a lot to me.

He also loved all of his grandchildren and even shifted a small portion of his allegiance to the St Louis Cardinals to the Chicago Cubs because he was so proud of his grandson, Lukas, playing in the Cubs organization.

When we left him over the years, he often gave us a hand wave and said, “See ya.”

When the roll is called up yonder, a song he sang with relish, we all will be there so save a seat at the table.

Until then, See ya.

April 24, 2019 Do You Have Connections?
Recent Comments
28 Comments | Leave a Comment
"Your objections have nothing to do with human beings having "subjective awareness". Of course, there ..."
Rick Castillo The Five Conundrums of Calvinism
"Thanks John, I referenced your article in my blog. Very well said. God bless!https://photonfarms.blogspo..."
Fred Hayward What are “Vain Repetitions”? (John Frye)
"Remember, with the standard model of God, we're dealing with an early Iron-age warlord who ..."
Kyllein MacKellerann " Leaving (My) Church, by Kelly Edmiston
""Judge not..." The warning is there and dutifully ignored in the pursuit of self-image."
Kyllein MacKellerann " Leaving (My) Church, by Kelly Edmiston
Browse Our Archives
get the latest from
Evangelical
Sign up for our newsletter
POPULAR AT PATHEOS Evangelical
1