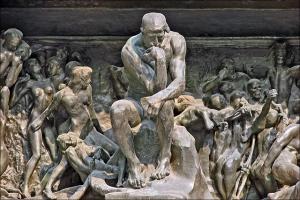 The final segment of the conversation between Heidi Lene Maibom and N. T. Wright addresses the solution to the previous question “what is wrong with the world?” The moderators narrows the question to consider what the solution means for personal responsibility. The  conversation covers several points worth consideration. Prof. Maibom emphasizes our obligation to our fellow humans. She begins with the idea that we should “each, in our own way do something every day to make the world a little bit of a better place.” (here) Wright picks it up, agreeing with her, but putting the reason for such action into the bigger context of the Christian story. (The section below should start at 1:11:40 in the video.)

Just after Easter, this is well worth considering:

…  But for me the solution lies at least one step, if not two back from what you said, because there is a certain point at which I can hear myself saying what you said to a group of people who would then go and turn on the television news and say really, if this politician or that is going to start a thermonuclear war … or whatever, what’s the point going to all that trouble to be nice to people on the street? Is there a solution to the bigger question? And that’s the really tough issue.

But then behind all of that, the solution from the Christian point of view is that the God who made the world has launched the project of healing and renewing the world within the middle of history. This is what the story of Jesus is all about. The kingdom of God, not as an abstract idea, but as a new way of being human, which has been inaugurated and in which we are invited to participate. And in which the best instincts of the best humans of every tradition such as the one’s you’ve so well articulated, can be affirmed as well. Yes, absolutely, we should be doing that. But the point is we are doing that, not whistling in the dark as the world goes to hell in a hand basket all around us, but as part of a project which we believe will have a goal, a telos, and that is where the virtue thing comes home to roost. … In Christianity, virtue is always a team sport. You can’t do it by yourself. It needs to be done in community. And that’s why love, joy, peace, patience, goodness, faithfulness, self-control, you can do hardly any of those by yourself. You need to be practicing virtue within a community. The re-founding, the re-energizing, of a genuine human community, which then creates a context within which it is easier to choose to do the sorts of things you were talking about. …. It is wonderful when you see that going on. 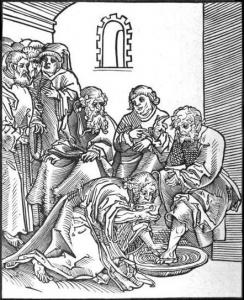 I have been struck this Easter season by the Christian story as one that raises humility and self-sacrificing love for others as the dominant themes. For God so loved the world. This command I give you that you love one another.  The Easter story isn’t simply a transaction for our salvation.

But, this take on things brings two critiques from Maibom. The first is one of motive. She responds (1:16:14)

Love for others, if it comes from a motivation other than true concern for their very being, is only a shadow of the real thing. As a Christian I agree with her that we do it because we owe it to our fellow creatures. I personally root this in Genesis 1:27 – that all humans are created in the image of God, with a vocation and with intrinsic value. Toward the end of the segment, Wright presses a little asking how she would respond to the Machiavellian position that the only thing to do is take what you can and do what is best for you and your tribe.

In response we have Maibom’s second critique as she turns the conversation a bit, to the consideration of good and how we can know what is truly good (1:20:27).

Let me give you a little different response. … Plato … asked the following question: Is something … good because god loves it or does god love it because it’s good? And there, I think, the problem is that if you just make it the case that something is good because god loves it, it could be anything. It makes good arbitrary. And that I think is not what most religious people think. They think that god loves the good because it good. But that means that good is in some way independent of the will of god, right? And I guess that would be my position, that we have access to this idea of the good whether you want to go through a religion or through, for lack of a better word since I am a philosopher, I should say reason.

Is good something that exists apart from God, independent of his will?

How would you respond to Maibom’s claim?

Perhaps we all, independent of religion or tradition, have an inkling of the true nature of good and of love because God created the world. We can reason to it because it is intrinsic to who and what we are. We can also fall far too short, as individuals and on a corporate level as a people. This is why we feel deep down that there is, in fact, something wrong with the world.

The crying shame is how far short the church – the people of God and body of Christ? – so often fall.

April 23, 2019 Alex McKnight: He Ran the Race Well
Recent Comments
2 Comments | Leave a Comment
Browse Our Archives
get the latest from
Evangelical
Sign up for our newsletter
POPULAR AT PATHEOS Evangelical
1