In a recent article on Get Religion, we encounter a new approach to believer’s baptism and thus a new argument against infant baptism:

Why do most Christian churches baptize babies?

This classic issue unexpectedly popped up as news on June 23 due to an Irish Times interview with Mary McAleese, an attorney and the former president of Ireland. McAleese assailed her Catholic Church for its practice of baptizing infants shortly after birth with parents making vows on their behalf.

That treats children as “infant conscripts who are held to lifelong obligations of obedience,” she protested, and that’s a violation of their human rights. “You can’t impose, really, obligations on people who are only two weeks old” or inform them “at seven or eight or 14 or 19 here is what you contracted; here is what you signed up to,” because they did not give their own consent to be church members.

To her, the church’s age-old baptismal practice “worked for many centuries because people didn’t understand that they had the right to say no, the right to walk away.” But she says modern people “have the right to freedom of conscience” although “the Catholic Church has yet to fully embrace that thinking.” 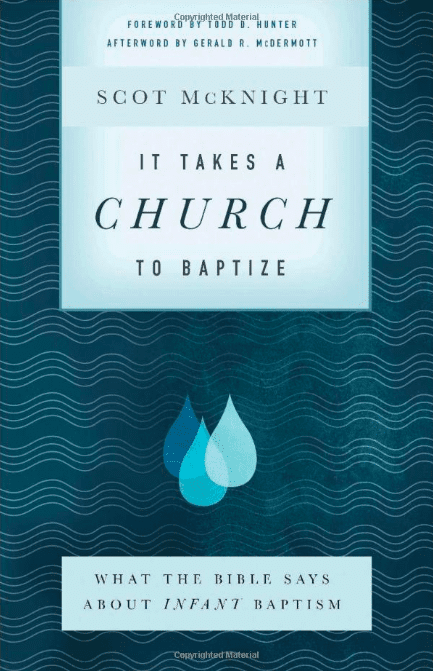 So, it’s about rights. I sure hope Mary McAleese realizes the profound inconsistency she’s walked herself into: do we then say you are not Irish or Northern Irish or American or Danish until you make a choice? Do we wait for children to grow up or until they understand their rights to teach them about what is good, what is honest, what is noble, what is wrong, what is evil?

What she fails to understand here is the fundamental dyadic nature of a human being: we are not individuals until we are nurtured by a family and a community and a society. No one is an island.

Nurturing is the way we become persons.

This has been brought to the fore in a recent wonderful book by Susan Eastman. Freedom or liberty, with their entailment of duties and obligations to others, emerged on the scene only because people in community learned that liberty was the best way for a society to work. What was first was the community.

Which is what I argue in my book on infant baptism called It Takes a Church to Baptize: What the Bible Says about Infant Baptism.

A strong case has been made and can be made for infant baptism in the context of a family and church. A focus on rights, which is found in the clip above, is precisely the antithesis of how the Bible talks about nurturing the faith of our young. Rights language itself is Enlightenment stuff, not biblical stuff. I could go on…

The book discusses important terms dealing with a theology of baptism (like conversion, covenant, salvation) and it talks about the importance of family and church in the baptism process, and it has something to say about whether baptism is God’s act or our act … and more…

And I tell my story of shifting from believer’s baptism only to infant baptism as the way forward.

Kevin DeYoung has a (very) brief defense of infant baptism posted at the TGC website. (I have now a 25 page paper or so for my own defense, but it will be published in the Colossians-Philemon commentary I’m now writing.

After emphasizing fellowship with many Baptists/paedo-baptists, he gives his basic approach — covenant theology.

1. God made a covenant with Abraham, it meant circumcision, for him, and then for his son — and for Ishmael too. That’s the origin of the argument: covenantal theology and covenantal approach to participation in God’s family.

2. Circumcision had meaning beyond the physical rite.

Children today are baptized based on this same covenant with Abraham. Paul makes clear in Galatians 3 what Peter strongly suggests in Acts 2, namely that the Abrahamic covenant has not been annulled. It is still operational. In fact, we see the basic promise of the Abrahamic covenant running throughout the whole Bible, right up to the new heaven and new earth in Revelation 21.

But we know from Colossians 2:11-12 that baptism and circumcision carried the same spiritual import. The transition from one to the other was probably organic. As the Jews practiced proselyte baptism, that sign came to be seen as marking inclusion in the covenant people. For awhile circumcision existed along baptism, but as the early church became more Gentile, many of Jewish rites were rendered unnecessary, and sometimes even detrimental to the faith. Thus, baptism eclipsed circumcision as the sign renewal, rebirth, and covenant membership.

4. He gives a few more arguments, and here are two of them:

One, the burden of proof rests on those who would deny children a sign they had received for thousands of years. If children were suddenly outside the covenant, and were disallowed from receiving any “sacramental” sign, surely such a massive change, and the controversy that would have ensued, would been recorded in the New Testament. Moreover, it would be strange for children to be excluded from the covenant, when everything else moves in the direction of more inclusion from the Old Covenant to the New.

Two, the existence of household baptisms is evidence that God still deals with households as a unit and welcomes whole families into the church to come under the Lordship of Christ together (Acts 16:13-15; 32-34; 1 Cor. 1:16; cf. Joshua 24:15).

June 13, 2019 Is this Congregationalism?
Recent Comments
38 Comments | Leave a Comment
"Avoidance of these verses is at the heart of faulty conclusions. Humanistic interpretations are why ..."
Glenn Harrell What To Say When Someone Says ..."
"I think what you should say is: "I don't want to kink shame, but that's ..."
Spirit Plumber What To Say When Someone Says ..."
"Jesus dying temporarily for our sins doesn't really make much sense. Here's why:Let's say I ..."
C Nault What is a “Sacrifice of Atonement”?
"Any updates on when it will be released???"
Brian Kelly The “Second” Testament
Browse Our Archives
get the latest from
Evangelical
Sign up for our newsletter
POPULAR AT PATHEOS Evangelical
1