Is this Congregationalism? June 13, 2019 Scot McKnight

Is this congregationalism? soul freedom? Or what is this? Federal representation?

The 2011 Faith Matters Survey — a study from Harvard and Notre Dame that surveyed 2,646 Americans — asked respondents how much they agreed with the following statement, “Women should be allowed to be priests or clergy in my house of worship.”

Three quarters (77.8%) of Americans agree. That includes two-thirds (64.7%) of Southern Baptists and Roman Catholics (68.9%). That could accurately be described as strong levels of support. 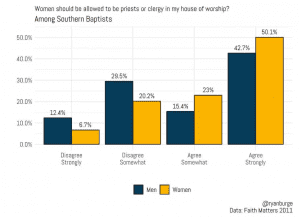 Looked at from this view, a doctrinal change for the SBC on this issue would seem to please many more people than it would anger.

So, why hasn’t it happened?

June 13, 2019 Creation Care? (RJS)
Recent Comments
6 Comments | Leave a Comment
"This article starts a series on what A Course in Miracles (ACIM) implies when acim ..."
burakdeniz The Miracles of Creation? (RJS)
"It is your confidence in these thoughts that needs pardoning and what causes absolution a ..."
burakdeniz The Miracles of Creation? (RJS)
"Scot, 1 Cor 16:15-18 asks the Corinthians to submit to the leadership of Stephanas and ..."
Richard Fellows Finishing Well With Clement
"I can only guess that they look at Trump as a kind of god like ..."
D.M.S. The Gospel of With Us and ..."
Browse Our Archives
get the latest from
Evangelical
Sign up for our newsletter
POPULAR AT PATHEOS Evangelical
1

Are You a 'Judgmental' Christian? Good.
The Chorus In The Chaos
Related posts from Jesus Creed