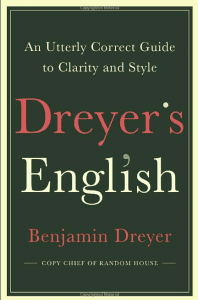 I try to read one book on writing each year. This year’s book is the always witty Benjamin Dreyer, Dreyer’s English: An Utterly Correct Guide to Clarity and Style.

His opening chapter gives twelve words not to use. That’s right, he says, wipe them out entirely. Here they are, well, here is his opening discussion:

Go a week without writing

very
rather
really
quite [SMcK: on p. 8 one meets “Quite”]
in  fact

Oh yes: “pretty.” As in “pretty tedious.” Or “pretty pedantic.” Go ahead and kill that particular darling.

And “actually”? Feel free to go the rest of your life without another “actually.’

If you can last a week without writing any of what I’ve come to think of as the Wan Intensifies and Throat Clearers—I wouldn’t ask you to go a week without saying them; that would render most people, especially British people, mute—you will at the end of that week be a considerably better writer than you were at the beginning.

July 24, 2019 A Few Seats Still Available in our Next Cohort
Recent Comments
4 Comments | Leave a Comment
""
Queenofthefuzzybugs The (Non)Wesleyan (Non)Quadrilateral
""
Xanthrince JesusCreed.org Blog Prayer
""
William Ristau Writing In Your Life
"'This renewal began first with the renewal of the people of God (chapter 5 or ..."
Kostya2 Putting the Bible Together
Browse Our Archives
Related posts from Jesus Creed