The Value of Western Civ 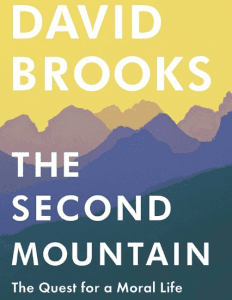 It is, one would think from listening to many so-called thinkers today, that Western Civilization is dead-and-gone, a subject beyond-which-we’ve-moved, and other cultural insults. That being educated into, or formed by, Western civilization is a dangerous illusionary world, a bad social imaginary. Not so, says David Brooks in The Second Mountain.

Many say that Western Civ and this kind of Great Books education is an elitist enterprise dominated by dead white males. But Western Civ was and remains radicalism—a subversive, revolutionary :ounterculture that makes it impossible to remain fat and happy within the status quo. Western Civ is Socrates, a man so dangerous, his city couldn’t tolerate him living within it. Western Civ offers ways to step out of the cave and see reality in its true colors, not just as the shadows that ideologues are content to see. Western Civ took me outside the assumption of my time, outside the values of the modern meritocracy d America’s worship of success. Western Civ inspired me to spend my life pursuing a philosophy—to spend decades trying to find a worldview that could handle the complexity of reality, but also offer a coherent vision that could frame my responses to events and guide me through the vicissitudes of life. Western Civ is the rebel base I return to when I want to recharge my dissatisfactions with the current world. Once you’ve had a glimpse of the highest peaks of the human experience, it’s hard to live permanently in the flatlands down below. It’s a little hard to be shallow later in life, no matter how inclined in that direction you might be.

I’m with Brooks. Great Books for me include Homer, Virgil, Dante, Milton, etc..

PS: The “Notes” at the back of this book cite the biblio information and page number of the quotations in the book. However, a big issue: I’d estimate 33% of the Notes references/information are missing.

August 29, 2019 The New Testament You Never Knew (RJS)
Recent Comments
29 Comments | Leave a Comment
"Many would say “biblical” and that, like forgiveness said C.S. Lewis of forgiveness, is a ..."
Doug Croze What is “Evangelical” Theology?
"Even if imputation is in view it is not the imputation of his life but ..."
John Thomson The Gospel and Double Imputation
"Fear is something dangerous, and it can direct your um curso em milagres youtube life ..."
burakdeniz The Miracles of Creation? (RJS)
"If Wilson limits his theology to what scripture explicitly states (and he does), then isn't ..."
Robert Zeurunkl The Subordinate Place of Supreme Honor: ..."
Browse Our Archives
get the latest from
Evangelical
Sign up for our newsletter
POPULAR AT PATHEOS Evangelical
1