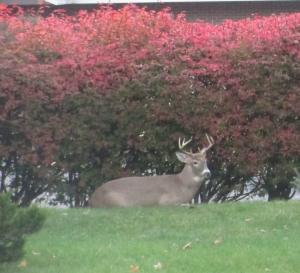 Saturday morning we were treated to a window seat as ‘nature’ took its course. An eight point buck was bedded down and patiently waiting in the back yard. We often see does and fawns in the yard (they devoured two of our young cherry trees last year! – we will have to protect the new ones better), but this was the first buck in the 12 years we’ve been in the house. His patience was rewarded when a doe came out from hiding under the spruce tree. A chase ensued, he caught up to her, and nature took its course (as this is a family blog I’ll skip those pictures – I’ve had some claim that even deer deserve their privacy – of course, then they should stay out of the back yard!). Suffice it to say that we might expect yet another fawn in the spring. 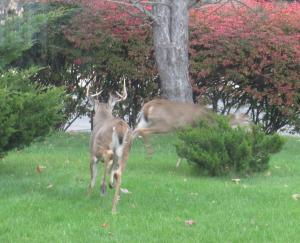 So why are conservative Christians as a group (with many individual exceptions) anti-science when it comes to these kinds of issues: pollution control, environmental protection, climate change? It boggles my mind because there is no good theological reason for this attitude. In fact such virtues as stewardship and love for others dictates that we of all people should care. Not as radical green idealists who put the rest of nature over human flourishing, but as humans, God’s image, in the world to care for it and for others. Air pollution is a devastating problem in many cities around the world – as Southern Californians know quite well. Anthropogenic climate change is also a reality. How devastating might be up for debate – I don’t think this is an entirely settled question – but that doesn’t mean that we should sit back and do nothing, or worse yet, accelerate our pursuit of technologies suspected of making it worse. 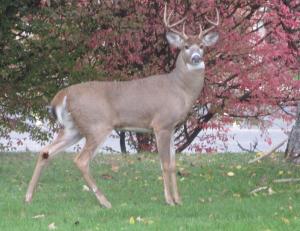 Katherine Hayhoe, an evangelical Christian, a climate scientist, and a voice advocating for careful consideration of the issues in the evangelical church (she isn’t willing to give up the term even though it has been tarnished by some of us) has an opinion piece in last Sunday’s New York Times. It is well worth the read. Although behind a paywall in general, the NY Times allows a certain number of free reads a month, so you may be able to access it even if not a subscriber. She concludes the piece:

By beginning with what we share and then connecting the dots between that value and a changing climate, it becomes clear how caring about this planet and every living thing on it is not somehow antithetical to who we are as Christians, but rather central to it. Being concerned about climate change is a genuine expression of our faith, bringing out attitudes  and actions more closely into line with who we already are and what we most want to be.

This is why she continues to speak up and speak out – from her expertise and her faith. I have long encouraged the church to develop the wisdom to listen to faithful Christians with deep expertise in science (all sorts) and then act on this base of knowledge. Don’t count credentials – listen to the arguments and reasoning. This goes for the evolution ‘debate’ but many other issues as well – and creation care, from pollution control to climate change, has far more significant consequences than our in-house arguments about the age of the earth and the process of evolution.

November 6, 2019 "Cultivate this mindset..."
Recent Comments
12 Comments | Leave a Comment
Browse Our Archives
get the latest from
Evangelical
Sign up for our newsletter
POPULAR AT PATHEOS Evangelical
1