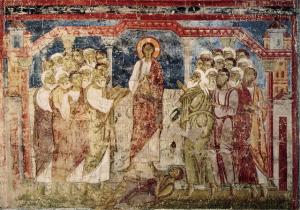 Then he rolled up the scroll, gave it back to the attendant and sat down. The eyes of everyone in the synagogue were fastened on him. He began by saying to them, “Today this scripture is fulfilled in your hearing.” Luke 4:16-21

The Gospel of Luke and the Acts of the Apostles together form one coherent story.  According to Luke Timothy Johnson in his recent book Miracles: God’s Presence and Power in Creation:

The miracles performed by Jesus and recorded in the Gospel of Luke continue on through the book of Acts, now performed by the apostles, especially by Peter and Paul in the name of Jesus accompanied by occasional instances of direct divine intervention (e.g. Peter’s release from jail in Acts As we saw in the book of Mark, these are not arbitrary deeds performed for convenience or for applause. They establish Jesus as God’s Messiah, with the Spirit of the Lord upon him. Jesus is clearly a prophet of the living God of Israel.  He is more than this, but the signs and wonders he performs don’t establish this – they witness the power and purposes of God, the Father. Johnson makes this explicit:

Luke makes the argument that Jesus is the prophet like Moses whom “God has raised up,” in his ministry (Luke 7:16) and above all through his resurrection and exaltation (Acts 3:22, 7:37), and his witnesses continue his prophetic witness in the world. (p. 228)

Jesus was anointed by the Holy Spirit went about with the power of God – and God raised him from the dead. This is how Peter puts it in the house of Cornelius: You know what has happened throughout the province of Judea, beginning in Galilee after the baptism that John preached— how God anointed Jesus of Nazareth with the Holy Spirit and power, and how he went around doing good and healing all who were under the power of the devil, because God was with him. … They killed him by hanging him on a cross, but God raised him from the dead on the third day and caused him to be seen. … He commanded us to preach to the people and to testify that he is the one whom God appointed as judge of the living and the dead. All the prophets testify about him that everyone who believes in him receives forgiveness of sins through his name.” (Acts 10:38-43)

Luke also makes it clear that Jesus Christ, who was anointed by God, is Lord of all. It is through his name and power that the apostles perform signs and wonders. In Acts 3 Peter heals a lame beggar “In the name of Jesus Christ of Nazareth, walk.” There is no indication that the apostles heal through their own power, it is the power of God through the name (and power) of Jesus. “Peter and Paul perform parallel wonders, and the deeds of both echo Jesus. … what is significant is … the power of God at work in the world through God’s prophets:what better way to show this than through the prophets performing similar wonders.” (p. 238)

The birth, ministry, death, and resurrection of Jesus, the establishment of the church, the extension to include both Jews and Gentiles in on united family of God. All of this is through the Spirit and power of God. The miracles, signs, and wonders recorded in Luke-Acts display the liberation from the power of Satan and the coming kingdom of God. This is the power of God at work in the world.

The miracles apart from the story are meaningless arbitrary acts. In the context of the story they play a central role displaying the power of God.