All About Incarnation (RJS) 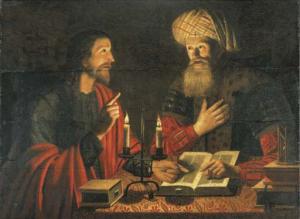 The book of John contains no infancy narrative, and the fewest miracles – only about seven or so. No exorcisms, several healings, a few nature miracles, and, of course, the resurrection. But this certainly does not make it more “down to earth.”  In fact, … “we can consider the entire Gospel narrative to be the manifestation of God’s presence and power within creation. … The miracle that the entire Gospel expresses is the miracle of incarnation.”  (p. 251) From beginning to end.  As what is likely the latest of the Gospels, it “reveals signs of continuing reflection on the mystery of Jesus and is intricately worked to accomplish its effects.” (p. 254) The focus on incarnation is apparent from the opening lines – and it certainly doesn’t need a birth narrative to achieve the purpose.

In the beginning was the Word, and the Word was with God, and the Word was God. He was with God in the beginning. Through him all things were made; without him nothing was made that has been made. In him was life, and that life was the light of all mankind. The light shines in the darkness, and the darkness has not overcome it.
…
The true light that gives light to everyone was coming into the world. He was in the world, and though the world was made through him, the world did not recognize him. He came to that which was his own, but his own did not receive him. …
The Word became flesh and made his dwelling among us. We have seen his glory, the glory of the one and only Son, who came from the Father, full of grace and truth. (1:1-5, 9-11, 14)

The Gospel of John sees Jesus as the center of everything, and the very presence of the living God in the world.  “Everything in John centers in Jesus – he draws all titles, all metaphors, to himself – because as the Word, it is Jesus’ function to “reveal God” in the world (i:18). In John, the drama of God’s self-disclosure in the world … is made explicit in the drama of God’s Word becoming flesh in the humanity of Jesus.” (p. 255)

The miracle stories in the Gospel serve the purpose of illuminating the power of God through Jesus as the bread of life. After the feeding of the five thousand men (plus women and children) in John 6 the story continues with deep questions and answers … it is not Moses who has given you the bread from heaven, but it is my Father who gives you the true bread from heaven. … I am the bread of life. Whoever comes to me will never go hungry, and whoever believes in me will never be thirsty. (6:32,35) and moves on to John’s version of the Eucharist meal (6:53-56) 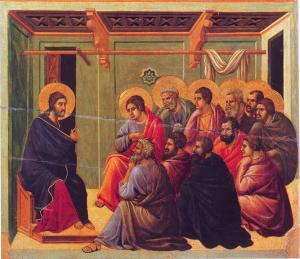 The true light gives sight to the blind. When Jesus spoke again to the people, he said, “I am the light of the world. Whoever follows me will never walk in darkness, but will have the light of life.” (8:12) And after restoring the man blind from birth: For judgment I have come into this world, so that the blind will see and those who see will become blind. (9:39)

The signs and wonders also serve to identify Jesus as from God. Nicodemus: Rabbi, we know that you are a teacher who has come from God. For no one could perform the signs you are doing if God were not with him. (3:2) and the people after being fed: Surely this is the Prophet who is to come into the world. (6:14)  and after the restoration of life to Lazarus as the chief priests and the Pharisees sought to get rid of him (ha!) Even after Jesus had performed so many signs in their presence, they still would not believe in him. … Yet at the same time many even among the leaders believed in him. (12:37, 42)  The signs and wonders were a mixed bag – they demonstrated the power of God and provoked fear in the leadership. 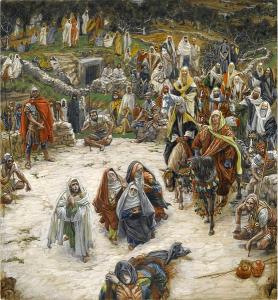 But the greatest sign, Johnson argues, is the glorification of the Son. Incarnation ends in enthronement – but not before or without execution.

If we understand the terms “glory” and “glorify” as they have been used throughout John’s Gospel, we understand that this is the time when God’s presence and power are to be most manifest in the flesh of Jesus, not in the signs that he performs, but in the symbol or sacrament that he himself is. God’s saving presence is, as much for John as for the evangelist Mark, paradoxically most real where it seems to be most absent, in the passage of Jesus to God through a violent and shameful death by state execution. (p. 272)

The ultimate sign in John’s Gospel from beginning to end, is that God has entered most intimately into the fabric of our human condition, and having so entered, is carrying that frail human condition into the full presence of God. (p. 273)

Following the resurrection, Jesus appears to Mary, and then to the disciples on three separate occasions. The ultimate in signs and wonders. Here he commissions them to carry on the mission. “Peace be with you! As the Father has sent me, I am sending you” and after the final miracle in the Gospel, a catch of many fish, specifically to Peter he gives the command to “feed my sheep” and worry about himself rather than the call and fate of others … “you follow me.”

The painting by James Tissot (1836-1902)  – What Our Lord Saw from the Cross – provides an interesting perspective.

The Long History of the Religious...
Anxious Bench
Related posts from Jesus Creed