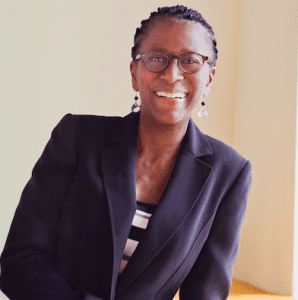 Rachel Conner, a friend of Kelly Edmiston, has been part of the Sugar Land Vineyard since 2001, and along with her husband Stephen, has been an active participant in the life and activities of the local church. She has served on the Senior Pastor’s Council and completed her Spiritual Director’s Training. She now serves as the Executive Pastor for the Sugar Land Vineyard Church, working with the pastoral staff and leading various discipleship efforts. In her spare time she enjoys the beach and spending time with family and friends. Kelly is here beginning a series of blog posts for Jesus Creed from women in ministry.

I identify as an unashamedly 68– year- old African American female born in the south.  I also identify as an unapologetic Christ follower.  The church is MY place and the space where I have been shaped, formed and loved, while at the same time disrespected and put in my place. Yet, it was the place where my family and friends built a community that taught me the value of relationships, worship, prayer and the study of scripture.  In later years, it was also the place where I walked into being more than my 68 year old, African American female, raised in the south self.

I want to share with you my experience growing up in the south as a black woman in an all black baptist church. I am from a long line of very accomplished and courageous men and women who were leaders in the community and the church. I want to be clear, I was raised in a two parent home which was not uncommon in our community.  My paternal grandmother called BS to black and white Catholics worshipping separately on Sunday mornings in our little town in Louisiana.  She was the single force behind the change that allowed Black worshippers to go through the front door of St. Mary’s Catholic Church in Cottonport, Louisiana in 1980. My maternal grandmother was busy making sure black children received a quality education. Black women were leaders in my black Baptist church.  I watched my mother lead women’s groups, missions, choir, the usher board, speak at conferences and do whatever God called her to in her time.  However, there was one space, she nor I could occupy….and that was speak from the pulpit to preach the message of hope in Christ Jesus.   Women had their place and I always overheard conversations referring to women as the “temptress” or worse, “Jezebel” who couldn’t be trusted with handling scripture from that prominent place reserved for “black men only.”  Therefore, my patriarchical society did not encourage me to live fully into my giftings that woud include being a pastor or preacher.  To go to seminary would mean to be trained as a missionary or evangelist, not to preach in the local church or pastor.

My brother passed away in February this year in Louisiana. To give the family eulogy, I did it from the front, but from a podium on the floor, off to the side.  I was not invited to do it from the pulpit even though I serve as an Executive Pastor in the Vineyard Church.  In some locales, in my experience in the black church, I am still treated as a female that has a place, and it’s not in the pulpit.  I have long since left the church of my heritage.  I realized early on that I was presented with a “female” way to serve the church and that did not include the pulpit. I had a dissident voice, without disrespect, that kept me at odds with my black church and the role of women who wanted to preach.  I did not believe that behind every great man was a great woman.  The operative word here being BEHIND. Unlike my grandmother, I walked away from the fight but not the faith or the church.

As God would have it, and the irony of that has not been lost on me, it was two white men who saw my potential for church leadership from the pulpit as well as organizationally, and invited me into my potential.  They did not give me permission, they invited me to participate using my special set of gifts to encourage the body of Christ.  Until this day though,  every time I step into the pulpit, for a brief moment, race and gender intersect and I feel am I where I do not belong.   And just as quickly, I remember that God has poured out his Spirit upon all people….and that includes my 68 year old, African American, female self in the pulpit!!

November 21, 2019 Understanding Transgender Identities
Recent Comments
4 Comments | Leave a Comment
"Avoidance of these verses is at the heart of faulty conclusions. Humanistic interpretations are why ..."
Glenn Harrell What To Say When Someone Says ..."
"I think what you should say is: "I don't want to kink shame, but that's ..."
Spirit Plumber What To Say When Someone Says ..."
"Jesus dying temporarily for our sins doesn't really make much sense. Here's why:Let's say I ..."
C Nault What is a “Sacrifice of Atonement”?
"Any updates on when it will be released???"
Brian Kelly The “Second” Testament
Browse Our Archives
get the latest from
Evangelical
Sign up for our newsletter
POPULAR AT PATHEOS Evangelical
1