3 unique resources for studying the life of King David

King David is one of the most interesting figures in all of Scripture. My friend David Teems recently summed up the fascination by focusing on the paradoxes of his namesake.

“Anointed as a boy, it would be years before David actually ruled anything, including himself,” he writes. “If he is messy, and he is, he is also glorious. If he is a man of blood, he is also a poet of the first order. If he is untamed, if he is a bit uncivilized, he is also a man after God’s own heart.”

David is a hero — and a disappointment. He is king of a people — and slave to his passions. He is the brave shepherd — and the calculating politician. He is the patient upstart, Saul’s reluctant usurper. The paradoxes offer us a full and rounded picture, one that allows us to size the sins and assay the character. This is no perfect man.

But if the writer of 1 and 2 Samuel lacks the hagiographer’s touch, he excels in the dramatic. David’s story is one of the Bible’s most gripping, and here are three books I’ve found useful in better appreciating it.

1. Robert Alter, The David Story. This is Alter’s translation of 1 and 2 Samuel (plus David’s passing in 1 Kings). The rendering here is energetic and fluid. And Alter’s extensive and helpful textual commentary pulls back the translator’s curtain to reveal the raw Hebrew in the background.

Heightened sensitivity to the nuances of the Hebrew allows Alter to tease elements from the narrative missed by many — including, for instance, possibly identifying Bathsheba’s active complicity in David’s adultery. There are a hundred such examples, many of which shade and add texture to the story.

2. Robert Pinsky, The Life of David. Pinsky is a poet and his portrait of David is lyrical, punchy, piercing, and shrewd. It’s impossible to avoid being swept into his telling, one that is both tender and frank in its humanness.

A great but imperfect book, among its deficiencies for a Christian reader is the conclusion that David “render[s] Jesus a tremendous afterthought. . . .” But there’s some ballast in the next title.

3. Peter J. Leithart, A Son to Me: An Exposition of 1 and 2 Samuel. Unlike Pinksy’s reading, Leithart’s is explicitly christological. Instead of Christ as afterthought, for Leithart Christ is climax, the ultimate focus. He achieves this reading by a careful and rigorous analysis of 1 and 2 Samuel, focusing on typology and narrative structure. The patterns and connections that emerge are illuminating and even exciting.

Just like their subject, all three volumes have their strengths and weaknesses. But they all offer unique angles on a life worth knowing, a life worth more fully appreciating.

What aspect of David’s story do you find most interesting, inspiring, or even troubling?

Have you ever heard of the 151st Psalm? While absent from the Masoretic text, you can find it in the Septuagint. The header explains that it was “written by David’s own hand…when he fought in single combat with Goliath.” 1 Samuel 17 tells the full story, but David here recounts the event, as might any bard. What follows is the full text of the Psalm, taken from Holy Transfiguration Monastery’s translation:

I was the smallest among my brethren, and the youngest in the house of my father; I did shepherd the sheep of my father.

My hands made an instrument, and my fingers fashioned a psaltery.

And who shall tell my Lord? The Lord Himself, He Himself shall hearken.

He sent for His angel and took me from the flocks of my father, and anointed me with the oil of his anointing.

My brethren were big and good, yet the Lord took not pleasure in them.

I went forth to meet the alien, and he cursed me by his idols.

But I drew his own sword and beheaded him, and took away the reproach from the sons of Israel.

That David was the runt but that God chose him echoes the Lord’s penchant for choosing underdogs: e.g., Jacob over Esau, Israel over the nations. 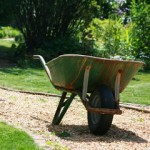 February 26, 2013
What a garden can teach us: A lenten reflection
Next Post

March 3, 2013 The Prodigal Son and our journey back to the father's house
Recent Comments
7 Comments | Leave a Comment
"Thank you, I am a Mormon and my love for Jesus Christ is only surpassed ..."
Tina Beal Why Mormons aren’t Christians
"Two kings were about to wage war against King Ahaz. Isaiah comes along and gives ..."
Prizm Is the virgin birth really predicted ..."
"Praying three times a day is the Jewish prayer schedule. Blessing the Lord seven times ..."
Jennifer Lee Why pray the hours?
"So do you have any evidence that the Greek version is more authentic to the ..."
geoffrobinson You’re reading the wrong Book of ..."
Browse Our Archives
get the latest from
Evangelical
Sign up for our newsletter
POPULAR AT PATHEOS Evangelical
1