One of the responsibilities of being a leader in a Pagan group is making sure you have good rituals for every circle on the calendar. That doesn’t mean I lead them all – Denton CUUPS is blessed with a good variety of capable and experienced ritualists. I typically lead one or two of the eight major holidays and assist on one or two others.

Writing Imbolc was not in my plans for this year. But when our circle coordinator for Imbolc developed some serious health issues (she’s doing better now and will be fine), it was my job to step in and put something together.

If you’re going to have to write a ritual on short notice, Imbolc isn’t a bad one to do. There aren’t huge expectations for it like Beltane and Samhain, and there isn’t a fixed local tradition like our Egyptian Summer Solstice. The connection to Brighid provides a general theme and there’s a lot of good poetry available for preludes and interludes. We’ve been using the same basic liturgical outline for almost ten years, so putting the opening and closing together was quite easy.

But what to do for the main event? While I wholeheartedly recommend reusing quarter calls and other ritual elements, I don’t like repeating the core working of a ritual. I know some rituals are intended to be done the same exact way every time, but I don’t want to give people reruns for a public celebration of one of the major Pagan holidays.

So I began sifting through ideas on my morning walks. And it wasn’t very long before I began hearing three words Sam Webster spoke at Between the Worlds: “render due honor.”

Most of our main workings are designed to do something – to create change in conformance with Will. Maybe it’s to bring new growth to the lives of those in the ritual. Maybe it’s for healing. Maybe it’s to let go of something that’s no longer serving our best interests. Maybe it’s to help turn the Wheel of the Year or to bring about a New Aeon.

While most Pagans at least know of Brighid, some don’t know her well. And in a CUUPS setting, there is usually someone who’s at a Pagan circle for the first time. So we first wanted to introduce everyone to her. The main working began with a three-fold guided meditation, to meet Brighid the Inspirer at the Tree, Brighid the Transformer at the Forge, and Brighid the Healer at the Well.

At the Tree we asked “What is it you’re called to create? What song must you sing, what poem must you write, what thing of beauty must you make? What is your great art?”

At the Forge we asked “Are you the hammer, the instrument of the will of this great goddess? Are you the anvil, supporting the work of others? Or are you the metal, going into the forge to be refined and shaped and tested, transformed into something more?”

At the Well we said “The water does more than quench your thirst. It refreshes your body. It restores your will. It renews your soul.”

Having met Brighid, it was time to make offerings to her. We poured cups of milk for everyone (some whole milk, some almond milk for those who can’t drink the cow stuff), then made this invitation:

We have invoked Brighid and she has blessed us with her presence. We have met her by Tree, by Fire, and by Well. Imbolc is her festival, and it is right and good that we should give due honor to her.

And so I invite you to come forward, take a cup of milk, pour some in the offering bowl, then drink the rest. In making the offering you make sacrifice – you make it sacred – and in consuming the remainder you take the sacred blessings of Brighid into you.

As you pour, and as you drink, remember your visions.

Then while Damh the Bard’s “Brighid” played softly, forty people got up, made an offering, and shared a cup of milk with Brighid. Included in that were three small children whose parents helped them with the pouring and drinking. I grew up thinking “making an offering” meant dropping money in a collection plate. Here are three people who will grow up understanding it means something else too.

What do all these people believe? What were they thinking as they made their offerings? Were they paying tribute to a goddess? Were honoring the Divine Feminine? Were they praying to a Christian saint? Were they working to promote inspiration, transformation and healing in their lives and in the world? I don’t know, and it doesn’t matter.

What matters is that on a cold Friday night in Texas, forty people came together and rendered due honor to Brighid. The rebuilding continues.

I hope your Imbolc was joyous and blessed. Hail Brighid! 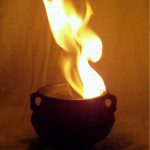 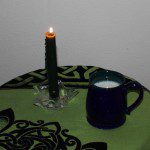 February 5, 2013 Wondering About Offerings
Recent Comments
2 Comments | Leave a Comment
"Sorry, this storm has been going on for quite awhile & we're right in the ..."
Celeste “The Storm” and “Tower Time” – ..."
"Just nature seeking equilibrium, and a bobcat hunting for an easy meal. The first time ..."
Woods Wizard A Bobcat in the Suburbs
"Maybe its not running away at all, I know my ancestors were nomadic Celts, so ..."
Michelle Gillian Why Do So Many of Us ..."
"Good article and very well timed.We Pagans are different. Therefore we are "Bad". This bit ..."
Kyllein MacKellerann " When Fundamentalists Complain About “Pagans”
Browse Our Archives
get the latest from
John Beckett
Sign up for our newsletter
POPULAR AT PATHEOS Pagan
1