The Secret History of the World

The Secret History of the World December 26, 2013 John Beckett 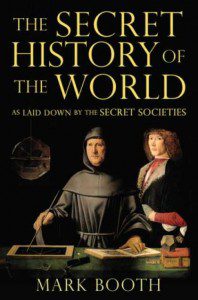 by Mark Booth
published in 2008 by Overlook Press
415 pages

“You must be mad, or you wouldn’t have come here.”  This line from Alice in Wonderland concludes the introduction to The Secret History of the World As Laid Down by the Secret Societies by Mark Booth.  You don’t have to be mad to read it, but if you don’t understand how to read it then it will surely drive you mad, in one sense of the word or another.

I just asked my wife the history teacher for a definition of history.  She said “history is the story of humankind, as written by the victors.”  This is the history you learned in school – the stories that are presented as objective truth but in reality are the interpretations of the narratives preferred by those in power.  My anthropologist friend says “history tells us as much about those who write it as it does about what actually happened.”

The Secret History of the World was not written by the victors.  It does not assume the primacy of science and materialism, nor does it follow the narrative of American Protestant Christianity.

In his presentation at the Sacred Lands and Spiritual Landscapes conference in April, Professor Ronald Hutton tried to show how many historians are doing their best to discover facts and leave the storytelling to others.  He gave the example of how the Lindow Man bog body was used as “proof” of Celtic human sacrifice because it fits into the story the victors have wanted to tell for 2000 years.  But the facts are inconclusive – Lindow Man might have been a human sacrifice, but he also might have been an execution or a murder victim.  He may have died in pre-Roman times, but it’s also possible he died during the Roman occupation or even after the Romans left.  We simply can’t say with certainty.

The Secret History of the World was not written by this kind of historian.  It does not present verifiable facts and plausible narratives.

This book will have Christians screaming “heresy!” polytheists screaming “blasphemy!” and atheists just screaming.  Here’s a review from Salon from 2008, when the book came out.

you might conclude that The Secret History of the World is a truckload of drivel, and you would be right. It is a mess of a book, disjointed and rambling, rife with puzzling non sequiturs that are obviously meant to be suggestive or evocative but that more often read like the symptoms of an advanced case of Attention Deficit Disorder.

If I haven’t scared you off yet, read on.

I heard about The Secret History of the World in DruidCast episode 80 in November, when OBOD Chosen Chief Philip Carr-Gomm interviewed author Mark Booth (the book was published under the pseudonym Jonathan Black in the UK).  Booth made it clear this was no attempt at objective history, but rather the history of the world as taught by the Western Mystery Tradition.  It communicates mythic history – not the history of myths, but the mythos of the origin and development of humanity.

Read this book as the great myth of humankind and you’ll find it informative and inspiring.  It draws from Babylon and Egypt, the Old Testament and the New, the Gnostics and Sufis.  It follows the history of the occult through the alchemists, the Rosicrucians and the Freemasons.  Its main point is this:  humanity’s origins are in the world of spirit, and for several hundred thousand years the spirit world was as close and as real as the material world.

In the ancient world experience of spirits was so strong that to deny the existence of the spirit world would not have occurred to them. … Paucity of experience makes belief in disembodied spirits difficult today.  In fact the Church teaches that belief is admirable because it is difficult.  The more your belief is out of proportion to the evidence the better, it seems.  This teaching would have seemed absurd to the people in the ancient world.

I find Booth’s explanation for this shift – the hardening of matter, forgetting our vegetable nature – to be implausible even when read mythically.  But that the shift happened is undeniable.  His statement that “the Third Eye was still much more active than it is today and had not yet become vestigial” strikes me as accurate, mythically if not literally.

And what strikes me as literally true is Booth’s assessment of Pythagoras and the mystery schools:  “life can be explained in rational terms only up to a point.  There is a vast irrational element in life, too.”  We aren’t comfortable with this irrational element, so we ignore it or rationalize it away.  Orthodox religion supports this.  Booth says “Experience of the spirit worlds was replaced by dogma to be accepted on authority.”

As I read this – highlighter in hand – I wrote: “this is a key point, to be reversed.”

This is the value of The Secret History of the World:  not its presentation of facts, but the story it tells and the narrative it presents.

Is there anything our declining Western society needs more than the subversion of unreflective, unquestioned habitual ways of thinking?  Is there anything we need less than “more of the same”?

Booth says “for most people the gradual withdrawal of the spirit worlds has been experienced with an increasing sense of alienation.”  This alienation from the spirit world and from Nature herself is one of the primary roots of modern Paganism.  We see the material advantages brought about first by agriculture and then by the industrial revolution.  Even as we enjoy these material advances – as I type these words on a notebook computer in a warm and comfortable room on a 21 degree morning – our souls yearn for what has been lost.

Western society in general and the American empire in particular have begun their long descent.  Booth’s predictions for the future draw too heavily from the Book of Revelation (a prophecy that has already come to pass but is continually recycled) but he’s got the basics right:

humans once had unhindered access to the spirit worlds.  Then this access became obscured and dimmed as matter hardened.  Now the barrier between ourselves and the spirit worlds is becoming thinner again.  The material world is fraying and becoming threadbare.

If you’re expecting an exposé of occult secrets from The Secret History of the World you’ll be disappointed. If you’re expecting typical history you’ll be frustrated.  But if you’re looking for a myth to show you how we got where we are and where we’re headed, give it a try. 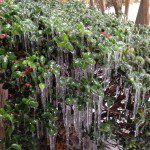 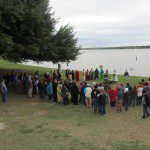 December 29, 2013 Integration – A Review
Recent Comments
5 Comments | Leave a Comment
Browse Our Archives
get the latest from
John Beckett
Sign up for our newsletter
POPULAR AT PATHEOS Pagan
1