Portrait of a Priesthood

If a picture says a thousand words, this painting says words that cannot be spoken.

As we were going over the final preparations for the Cernunnos Ritual, Cynthia told me that Morgan Milburn – one of our members – was making “something special.” But she wouldn’t tell me what it was. I’m not fond of surprises, but I’ve learned to go with it. In my script for the post-ritual announcements, I had reminders to thank Cynthia and Hannah for making the kerbstones, Russell for making the trophy poles, and Morgan for making the “mystery decoration.”

The CUUPS officers had a business meeting after lunch, so I was in the building when Morgan, Cyn, and a few others arrived to start setting up. We finished a couple minutes early and I went outside to see what they were doing. I was quickly told to go back inside – they weren’t ready yet. It didn’t take long. I was called outside, the veil was lifted, and I saw the painting. 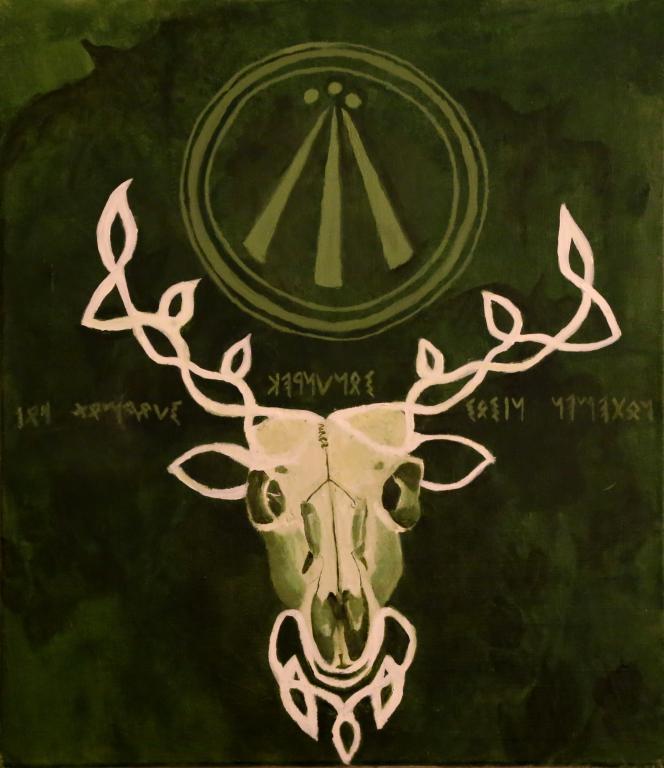 Works of art – especially works of visual art – have a life of their own. Sometimes the artist has very specific things they’re trying to communicate, while other times they’re merely the conduit (though usually, a highly skilled conduit) for something that wants to manifest in this world. In any case, once the art is shared it speaks for itself and its message can’t be contained or restricted.

I cannot interpret this painting for you. I can’t even fully explain what it means to me. But I can point out some of its details, and I can talk about why I’m calling it “Portrait of a Priesthood.”

The first thing that stands out is the Stag. Even if we weren’t getting ready to do the Cernunnos Ritual, there would be no question Who it is. Use of a skull to represent an animal deity is not uncommon, but this skull appears to have lips and ears – living flesh. While the skull has coloring like an actual skull, the whiskers and antlers are stark white. Are they vines and leaves? Stylistic interpretations? The stag is a part of this world and also part of the Otherworld.

Look closely at the shadows – they’re more than shades of green. The birds at the top of the painting are fairly easy to spot. The bear paw in the lower left is harder to see. I’m still not sure I’ve found everything that’s there.

I’m starting to think the script is of Otherworldly provenance. Morgan and Cyn decided what it should say, then consulted two experts to write the text. I asked for details so I could properly thank the translators. But now all of Cyn’s e-mails are gone, and the mutual friend she asked for help knows nothing about it. It’s been a couple months since I’ve been involved with an episode of high strangeness – I suppose it’s time for another. In any case, the text refers to me, and to Him, and to my work on His behalf.

The Name… or perhaps, the Names

In ancient times, many deities carried local epithets: names that expressed how They were experienced and how They were worshipped in one place vs. another. Athena Parthenos is not the same as Athena Agoraia, though exactly how different They are is a matter for polytheist theologians to debate.

This painting speaks to me as a representation of my priesthood. But it also speaks to the ways Cernunnos has been experienced and worshipped in Denton and in Dallas (and also in Pennsylvania, though that ritual was led by priests from North Texas in the Denton tradition). Perhaps this is a portrait of Cernunnos Denton or Cernunnos North Texas.

This requires more thought, prayer, and meditation. And probably whisky.

Morgan Milburn is a senior art major at the University of North Texas. She and her twin sister Gabby came to Denton CUUPS for the first time at Imbolc last year. They didn’t know much about Paganism, but they both had a strong interest and a willingness to learn.

Over the past year and a quarter, Morgan has gone from attending rituals to taking parts in rituals to co-leading this year’s Ostara ritual. You would never have guessed it was her first ritual to lead. She’s participated in our classes and private gatherings and contributed more than her share.

Morgan’s personal religious and spiritual journey is not my story to tell, but what I know of it is deep and dedicated… and growing. So it in no way surprises me that someone still relatively new to Paganism was able to capture so much depth in her artwork.

I’m very glad Morgan is a part of my local Pagan group. She graduates next year – who knows what will happen after that. But Denton has a way of working its way into the lives of those who come here, and I’m hoping the Gods will graciously allow her to stay with us a while longer.

The painting hung at the rear of our temple during the Cernunnos Ritual. The altar with the statue of Cernunnos was our focus and the ritual fire was our center, but the painting was visible to all participants all the time. Our Gods do not require physical forms to make Their presence known, but images of Them help us to experience Them and to recognize those experiences for what they are.

After the ritual, Morgan gave the painting to me. Words cannot express my appreciation, though I tried. This is a beautiful work of art that reminds me of my priesthood, my experiences of Cernunnos over the years, and the work He continues to call me to do.

It’s now hanging in my bedroom, directly opposite the Portrait of Danu by Tesa Morin. The positioning is more practical than intentional – that’s simply the best spot I have for a painting of this size and subject. But I love the symmetry.

I am honored to have such powerful and beautiful artwork in my life, and I am especially thankful for my wonderful friends who make it.

Painting by Morgan Milburn. Photograph by John Beckett. Both are copyrighted and may not be reused without explicit permission. 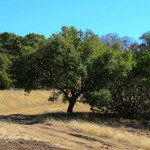 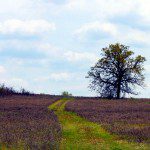