A Speculative Look at the Cycles of Magic and the Otherworld

In this post I want to do something I rarely do – share some ideas that are a long way from being fully developed. What you’re about to read isn’t fact. It isn’t UPG or spiritual revelation. It’s speculation. But I think it’s informed and reasonable speculation, and rather than waiting till I’ve got enough to call it a proper theory, I want to throw it out for discussion now.

But let’s begin with some facts to set the context. 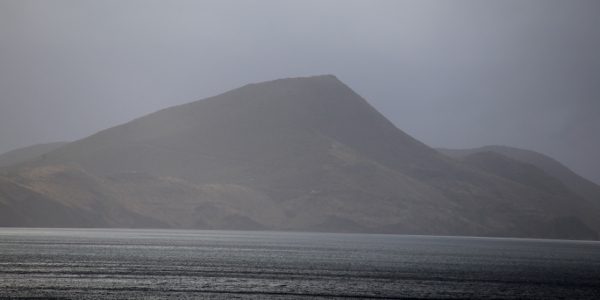 A Pagan view of time

Our Christian-influenced culture tells us time is linear. Time began at creation and it will end on Judgment Day. A moment comes, passes, and is gone forever. Over the past 300 years or so, a corollary has evolved: the myth of progress. Things get better for each succeeding generation and this upward trend will continue to the stars. Our socio-economic system is based on a belief in perpetual growth, which a bit of casual examination will show to be in serious error.

Paganism sees time as cyclical. Things come and go and then come again. The Wheel of the Year turns, bringing us from the Summer Solstice to the Fall Equinox to the Winter Solstice to the Spring Equinox and then back to the Summer Solstice again. The moon waxes from dark to full, then wanes back to dark. Every January is similar to every other January, even though they’re not identical. And Januaries are different from Junes.

Not all cycles are perpetual. Empires rise. They may wax and wane for a while, but eventually they fall. Pharaonic Egypt lasted for over three thousand years, through what modern historians call the Old Kingdom, Middle Kingdom, New Kingdom, and the Ptolemaic Period. We can debate whether the Ptolemaics were really Egyptians (they were mostly Greeks trying to claim the heritage and authority of the pharaohs), but with the coming of the Romans the Egyptian empire was over for good. Rome itself would rise and later fall.

Time, then, is not a linear progression of lesser to greater. Rather, it is a series of seasons and cycles.

Five years ago (has it really been that long?!) everyone was talking about the coming end of the Mayan calendar on December 21, 2012. Was the world going to end? Obviously it didn’t. Was some great cosmic shift going to occur? There was no sudden shift, but things changed a lot in the following years, although I’d put the start of the shift at some time in early 2011.

Late in 2011, John Michael Greer published a book called Apocalypse Not. It was less about the Mayan calendar and more about the apocalypse phenomenon – I turned that into a UU Sunday Service. Quoting Greer’s research, I said

The long count calendar is based on a formal year of 360 days, called a tun. Twenty tun make a katun, twenty katun make a baktun, and thirteen baktun make up the long count cycle of roughly 5125 years. The current cycle began on August 13, 3114 BCE and will end on December 21, 2012.

I don’t think any of those exact time periods –ranging from 360 days to 63 million years – are particularly significant for us. What’s relevant to this post is the concept of multiple series of cycles, some of which are very long.

The planets of our solar system revolve around the Sun over different periods of time. The Earth takes 365.25 days to go around the Sun. Mercury takes only 88 days, while Mars takes 687 days, Jupiter 11.9 years, Saturn 29.5 years (which gives rise to the astrological concept of Saturn Return) and Neptune 165 years. Pluto – for those who still consider it a planet – takes 248 years. 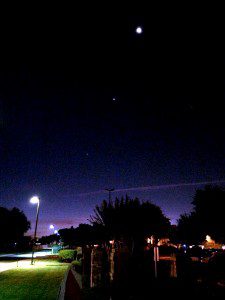 These varying periods of revolution create the phenomenon of planetary alignment, although the planets never perfectly align. A 30 degree arc is about as closely aligned as they ever get. But individual planets and stars come into close alignment all the time. I took this picture of Jupiter, Venus, and the Moon in October 2015.

Cycles of climate on Earth

We’re constantly aware of the Earth’s seasons. We just entered summer, and here in Texas we’re about to get into the worst of the heat. But annual seasons are far from our only cycles.

Most of us know the last ice age ended about 12,000 years ago. What most of us don’t realize is that there have been five major ice ages and some of them have lasted for hundreds of millions of years. This article from LiveScience does a good job of explaining the phenomenon, including the fact that we should be entering another ice age about now. But we aren’t, in part because of tiny variations in the Earth’s rotation and orbit, and in part because we’re dumping so much carbon dioxide into the atmosphere.

But sooner or later the cycle will hold and the current interglacial period will end.

Now that we’ve established a factual context of seasons, cycles, and alignments over time periods ranging from 88 days (one year on Mercury) to 300 million years (the Huronian Glaciation), let’s look at some of the shifts we’re currently experiencing.

We’re not in Kansas anymore

Regular readers will be familiar with the Otherworldly experiences – both my own and those reported by others – I’ve been writing about over the past few years. For the benefit of new readers, here are a few of the more important posts.

The Otherworld is Bleeding Through

The Veil Is Shredded

The Re-emergence of the Fair Folk in the Ordinary World

The Call of the Morrigan is Louder and More Urgent

If you haven’t read these posts and you don’t have time to read them now, the titles are pretty self-explanatory.

A few people I respect say this isn’t a long-term shift in the spiritual climate, it’s just short-term “weather” – the ordinary ebb and flow of the spiritual world. That’s possible – time will tell. If things settle down in a year or two or ten, we’ll know they’re right. I don’t expect that to happen.

Others point out my Anglo-American perspective and say other cultures never lost their experiences of the Otherworld. I would love to get some input from practitioners in Asia, Africa, and South America and hear what they have to say, but I can only work with what I’ve got.

Something about the nature of reality has changed in ways we haven’t seen in our lifetime and maybe not in recorded history. Here’s a summary from The Veil Is Shredded:

Stop and think about how much truly weird stuff is going on. Once or twice is random chance. A few times is a short-term trend. But read the comments to The Otherworld Is Bleeding Through – you’ll see report after report after report. This has been going on for at least five years and it’s getting stronger all the time. That’s not random chance. Otherworldly beings and influences are bleeding over into the ordinary world at an ever-increasing rate and many of them aren’t particularly pleasant or benign.

Something has changed. But what?

Looking for patterns and cycles

Now we move into the realm of theories that aren’t fully developed… yet.

The stories of our ancestors tell us the Otherworld used to be much closer to the ordinary world. They tell of wandering into the woods and finding yourself in Annwyn. Sail into the West and you may find yourself in the land of Manannan mac Lyr. Zeus and Odin were known to walk bodily among mortals to test their hospitality.

Then something happened and the Otherworld got farther away… or at least, harder to reach. Some blame the expansion of civilization. Some blame the rise of Christianity. Damh the Bard suggested it was when we made Iron from Stone.

But major shifts rarely have only one cause. Perhaps these human-centered changes had something to do with it, but perhaps this world and the Otherworld naturally moved farther apart… and now they’re moving closer together. We know the Veil Between the Worlds naturally thins at Samhain and Beltane – perhaps it also thins and thickens on a scale that’s thousands of years long.

And it appears that point in the future is now. 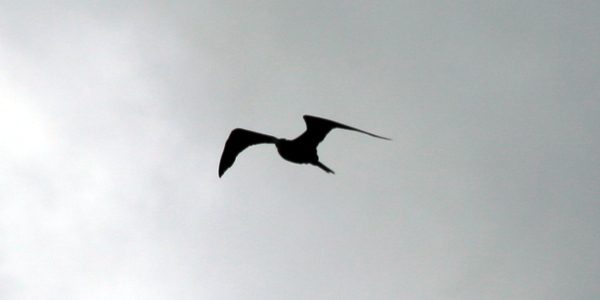 A set of proposals

Here’s what I’m suggesting is going on. At this point, these are speculations, not assertations.

What I can’t even guess about

Is the alignment of factors just starting? Is it at its strongest? Or will the Otherworld grow even closer, the Veil even thinner, the magic even stronger, and the Otherworldly beings even more present in the ordinary world?

How long is this going to last? A year? A hundred years? A million years? We can make some reasonable guesses as to when the last “magical maximum periods” ended, but we have no way of knowing when they started, so we can’t even guess how long it will last.

I’m pretty sure this is the most speculative post I’ve written in nine years of blogging. When it comes to beliefs, I like to say “hold loosely but practice deeply.” I’m holding this speculation extremely loosely. I’m putting it out here in this unrefined state in hopes of sparking some conversation.

What can we say about the timeline of magic throughout history? Is there evidence to indicate magic has waxed and waned on any sort of predictable timeline? Is there one cycle or a greater cycle and a lesser cycle?

Feel free to address any or all of these questions in the comments. I’m hoping some of you will give this some thought and then respond on your own blogs. This is too big and too complicated for any one person to figure out on their own.

After the ecstasy, the laundry

Apologies to Buddhist teacher Jack Kornfield, but his book After the Ecstasy, the Laundry has the perfect title to conclude this post.

It is good to understand the environment in which we work. The better we understand what’s going on in the spiritual world, the better we can respond to it. This is one of the reasons so many of us practice divination.

But while speculating about megashifts in the nature of reality is a helpful exercise, at the end of the day we still need to care for ourselves and our families, honor our Gods and ancestors, and leave the world a better place than we found it… even if the world as we know it is crumbling around us. Let’s think about this, but let’s not obsess over it, and let’s not let it keep us from doing what must be done.

But I’m going to keep wondering and speculating. 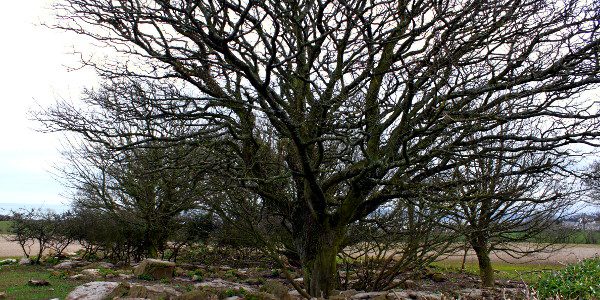 I welcome comments from all religious and spiritual perspectives, so long as they contribute to a polite and helpful conversation. Comments that include sarcasm, ridicule, religious proselytizing, or personal attacks will be deleted without warning. Play nice or don’t play at all. 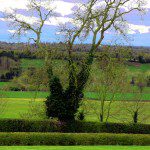 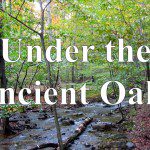