The Spiral Labyrinth: Beauty and Mystery at Samhain

This Samhain, for only the third time, Denton CUUPS will present The Spiral Labyrinth. As part of our ritual, we will spiral into the center widdershins, then spiral out deosil, spending the time meditating on our lives, our ancestors, and the Otherworldly persons who would speak with us.

I don’t write much about CUUPS rituals anymore. This blog has a worldwide audience, while our rituals are mostly a local thing. But if you’ve been thinking about coming to Denton to experience one of our high day celebrations, this would be a good time to do it. Also, I’m hoping that some of you will be intrigued by the idea of a spiral labyrinth and will make and present your own.

The first labyrinth was built by the Greek artist Daedalus for King Minos of Crete. It was a maze so complex the designer could barely find his way out. It was intended to imprison the Minotaur, a terrible creature that was half man and half bull. The hero Theseus would eventually kill the Minotaur. He was only able to find his way out because Ariadne gave him a ball of string, which he unwound as he entered and then followed on his way back.

In medieval times, labyrinths became a tool for meditation and prayer, as with the famous labyrinth of Chartres Cathedral in France. These labyrinths are not mazes but “unicursal” – they have only one way in, and thus one way out. You can’t get lost.

A unicursal labyrinth is great for one person, or for a small group of people who walk the labyrinth deliberatively and then gather in the center for common prayer before retracing their steps. But it’s impractical for a large group of people.

The spiral labyrinth (sometimes called a double spiral) solves this problem by nesting two spiral tracks within each other. You go in one way, make a turn at the center, then go out in the opposite direction. I’ll discuss the technical details later. The main point is that this design makes it possible to walk a labyrinth as a procession.

A long time ago I saw a picture of people walking a labyrinth of fire. Here’s a link to one in the UK from 2013. As soon as I saw it I knew I had to build one. But there were problems, with fire being at the top of the list. A fire labyrinth permanently alters the land, plus while North Texas isn’t as dry as California, there’s still a chance of starting a wildfire.

But tea candles in baby food jars are beautiful once it gets dark, and there’s very little chance of starting a wildfire – or of setting a labyrinth walker on fire.

The problem with seeing something cool (or even something deeply inspiring) and then trying to put a ritual around it is making it all fit. Just walking the labyrinth wasn’t enough – it needed context.

We put the Spiral Labyrinth in the center of our usual liturgy, minus the circle casting since we were going to be moving a lot. We included a tribute to our ancestors and a thanksgiving for Summer’s End – 2011 was the hottest year on record in North Texas, with 71 days of 100 degrees or more.

As we prepared to walk the labyrinth, we told the story of the Minotaur and asked “What lies at the center of your labyrinth?” And then:

As we walk in widdershins, we let go of what we do not need, and we tear down the walls that keep us from knowing ourselves fully and completely. When we reach the center, we step over a broom, which sweeps out that which no longer serves our True Will. As we walk out deosil, we begin the process of making peace with ourselves, and we commence our Great Work.

We had a good sound system set up outside and played a mix of Dead Can Dance and Le Mystere Des Voix Bulgares. It’s ethereal and the lyrics aren’t in English – it drowned out the background noise and added to the mystical atmosphere.

It was amazing, and magical, and transformative. But by the time we picked up all the baby food jars, we knew it was too much work to do every year.

In the four years from 2011 to 2015 my polytheism shifted from “whatever” to hard and devotional. As good as the generic Wiccanish ritual was in 2011, I knew this one had to be different. Fortunately, I had three deities tell me how They wanted us to make it different.

Our priests have taken positions on the outside of the Spiral Labyrinth. As we walk, they will be in prayer to the deities of this rite.  You may feel Their presence more strongly than usual. You may feel the presence of another Goddess or God. You may hear the voice of an ancestor, of blood or of spirit.

Or you may hear nothing. We cannot command our ancestors in the Otherworld any more than we could command them in this world, and as always, the Gods speak when it suits Their purposes and not simply because we have called Them.

I don’t remember much after leaving the main ritual area indoors. I was focused on Cernunnos and on facilitating an experience of Him by the participants. Someone had to come tell me and the other priests that the procession was over. We walked the Spiral Labyrinth to help us return to the ordinary world.

The next day I wrote Sore Quadriceps and the Reality of Pagan Priesthood. I was four years older than the last time we did the Spiral Labyrinth, and those four years made a huge difference. I don’t think I’ve ever been that tired after a ritual, before or since.

At our fall business meeting last year, I asked the membership of Denton CUUPS if they wanted to do another Spiral Labyrinth… with the understanding that I’ve aged four more years and can do very little of the physical work needed to set it up. It was a unanimous “yes!”

Education Officer Ruth Gibbs volunteered to co-lead the ritual, and somewhere between then and now she got a message that the Fair Folk had something they wanted to say. My own divination and UPG confirmed it. We do not worship the Fair Folk as we worship the Gods, and we heed the warnings of our ancestors to be extremely wary around them. However, they are here, and we have found it to be in our best interest to deal with them in a neighborly manner.

Our space and our guests will be guarded by our Gods and ancestors, and by the ancient laws of hospitality. Without giving too much away, we will acknowledge that this season is a liminal time, and we will listen for the Otherworldly persons who would speak with us.

And then once again we will walk the Spiral Labyrinth.

If you want to build your own Spiral Labyrinth

Building a spiral labyrinth is simple. It’s just a ton of work.

The main thing you need is a large piece of open ground. You need baby food jars, tea candles, long lighters, and enough young healthy people to set them, light them, and then pick them all up when you’re done. We put torches at the entrance, at the exit, and in the center.

We put a broom in the center our first year, but not in 2015 and we’re not planning on putting anything there this year. Remember that if people stop in the center, the whole procession stops with them.

Begin in the center of your space. Place your center torches (or just two jars) three feet apart. When you put a yardstick on the floor you will think three feet is too wide. But remember that the ground is uneven, you’ll be walking in the dark, and people who are larger or who have mobility issues need more space. We’ve found that three-foot wide spirals work well. 30-inch spirals do not.

Then start building two spirals from the inside out. Place your jars and candles about two feet apart on the curves. What you see here required about 350 jars and candles. If you have more and the time to set them, the effect will be even better. If you spread them out too much, you’ll lose the illusion of solid lines.

Keep adding candles till you either run out of space or run out of jars. You can try to plan it all out (and you should) but until you do it the first time, you won’t know exactly how big it will be.

We like to put the entrance on one side and the exit on the other – it emphasizes transformation. If you prefer to emphasize something else, or if your space isn’t conducive to this, you can put the entrance and exit side by side.

Be sure to walk the labyrinth all the way through several times as you’re building it. If your spirals get crossed up, best to figure it out right away and not as you’re starting to light the candles. 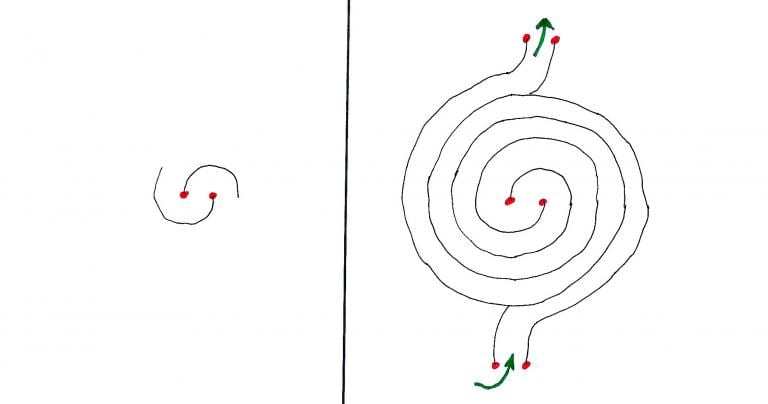 All who come in good will are welcome, regardless of religion or any other identity.

General information on what to expect at a CUUPS ritual can be found on the Denton CUUPS website.

Childcare will be available. In the event of inclement weather, the Spiral Labyrinth will be held in the sanctuary. 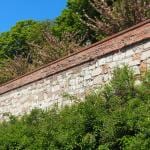 October 6, 2019
Three Circles of Paganism: the Plumber, the Priest, and the Mystic
Next Post 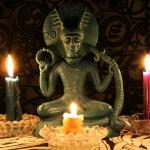 October 10, 2019 Why I Believe in the Gods
Recent Comments
0 | Leave a Comment
"Maybe with the right theme music, we could be "The Spirituality With No Name.""
Pitch313 Why I Still Call Myself Pagan
"As problematic as Disney can sometimes be, Frozen 2 had a saying that I just ..."
Zzyzx Tell Me What To Do
"Not that you asked ME, Dan--LOL--but, fwiw, the word "worship" sticks in my craw, and ..."
Laurie The Gods And Nature
"IMHO: Pagan/Paganism/Paganry has become like "Christianity"— not the fear-based religion of control, but a sort ..."
Kyllein MacKellerann Why I Still Call Myself Pagan
Browse Our Archives
Related posts from John Beckett