A bit of local controversy arose late last week when news reports began to surface around comments made by Eric Hogue, who is mayor of Wylie, Texas, a small town that used to be rural and is now a suburb of Dallas.

Another member of Wylie City Council suggested that some local students lead the public prayer at an upcoming council meeting. Mayor Hogue’s response was:

“All I ask is that those leading the public prayer be young men.”

Eric Hogue is not just mayor of Wylie. He’s also a pastor in the Church of Christ – that’s the very conservative, congregationalist Church of Christ, not the rather progressive United Church of Christ. They believe – based off a literal reading of New Testament writings generally attributed to St. Paul – that women are not permitted to preach, teach, or have any religious authority over men. That includes leading prayer where men are present.

Hogue told another reporter that when other council members have selected women to lead the prayer “I’ve always shown the respect that they deserve.” But he only selects men. I think it’s safe to assume he only selects Christian men, and only certain types of Christian men at that.

He says “If I am asked my opinion, I’m going to state my opinion.”

And he doesn’t understand why that’s a problem. 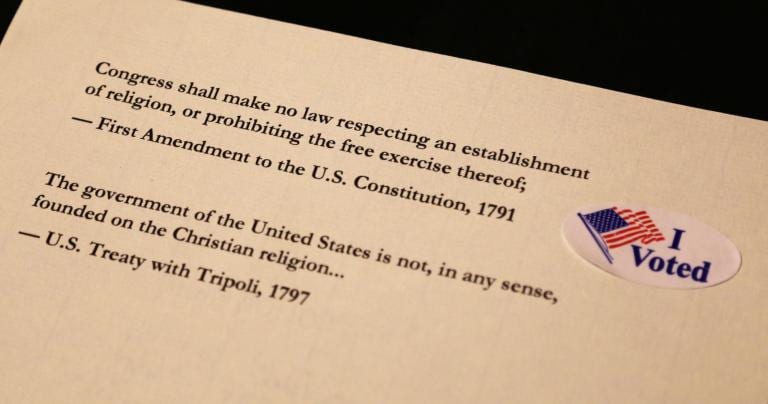 Why do we even have prayer before government meetings, anyway?

On one hand, I get it: public prayer is a very old thing – far older than Christianity. The temples of Egypt, Greece, Rome, and other societies of the ancient world were civic institutions. Most were publicly financed, with the goal of maintaining good relations between a people and their deities.

This country is different. While some of the early settlers came here to establish their own theocracy, the United States of America was founded on the principle of religious freedom. Not only do we have no patron deities, our constitution specifically forbids the establishment of any religion – which, despite what Dominionist propaganda would have you believe, means far more than “no national church.” It means that government cannot favor one religion over other religions, or over no religion.

That we have never truly lived up to that ideal is no excuse for not doing better now.

My preference is to end all civic prayer immediately. Public sectarian prayer is inherently divisive, as this incident shows.

But old habits are hard to break, and the benefits of a forced end to civic prayer aren’t worth the backlash against it, particularly now. And public prayer can be done inclusively.

Eric Hogue is wrong because he’s mayor of all citizens

This is what politicians who want to bring religion into government fail to realize. If you’re mayor of a city, you’re the mayor of all that city and you have an obligation to represent all its citizens, not just those who follow your religion. If you have public prayer then everyone has a right to participate, and every tradition has a right to be represented.

That means more than Church of Christ men. It means Methodist women and non-binary Unitarian Universalists. It means Muslims and Buddhists and Pagans.

And it includes atheists who want to offer a non-religious invocation.

A city official who only selects prayer leaders who meet his own religious criteria is not representing all his city – he’s subtly trying to establish his own religion, in fact if not in law.

If Eric Hogue won’t select women to lead civic prayer he should resign, or at least recuse himself from the selection process.

What he does in his own church is their business

Religious freedom is for everyone, not just for those you agree with. While I believe fundamentalism is religiously flawed and often leads to acts that can only be described as evil, fundamentalists have the right to practice their religion as they see fit… at least as long as they aren’t bombing abortion clinics or flying airplanes into buildings.

Do they have the right to inflict their religion on their children? I’m extremely reluctant to tell anyone they can’t pass their religion down to their children. At the same time, as someone who grew up in a fundamentalist church, teaching children that if they don’t follow the right religion in the right way they’ll burn in hell forever is child abuse.

If they want to leave and find a church that respects them as whole persons, that’s their right too.

At the end of the day I’m not a relativist. I respect your right to be wrong, but I’m not going to pretend wrong is right.

As a Pagan I have no sacred texts to tell me gender discrimination is wrong. But as helpful as the writings of our ancestors can be, they always reflect the times and traditions of the people who wrote them. Tradition is decidedly mixed – when men have dominated a society (which is most times in most places) they’ve usually dominated the religion as well.

“We’ve always done it this way” is no excuse for not embodying sacred values and virtues in the best way possible here and now.

For me, it comes down to this: if a deity calls someone to Their service, who am I to tell that person they’re wrong?

I clearly remember the first time I encountered this. I was 9 or 10 years old and I was just starting to realize that much of what I was being taught in the Baptist church ain’t necessarily so. The 6:30 PM national news had a feature on a woman who was fighting to be ordained. I don’t remember which denomination – this was the early 70s, so it could have been most of them. I remember that when I heard the introduction I repeated what the Baptists told me: “God doesn’t call women to be preachers.”

After I heard this woman’s story, it hit me: who am I to tell her she’s wrong?

Scripture and tradition have been used to justify slavery and genocide – they’re not an infallable inerrant guide on other issues either. A religion that’s stuck in the culture of its founding days is a stagnant religion.

I mostly stay out of the internal affairs of other religions – my own religion keeps me plenty busy. If your religion restricts leadership roles based on gender, that’s your business. But if a woman or a non-binary person says they’re called to a role you say is limited to men, I’m going to be on their side.

Meanwhile, Eric Hogue needs to learn to separate his religious duties as pastor from his civic duties as mayor.

May 28, 2020 The Best Way To Learn Magic Is To Do Magic
Recent Comments
0 | Leave a Comment
Browse Our Archives
Follow Us!