Today, May 22, is World Goth Day, “a day where the Goth scene gets to celebrate it’s own being, and an opportunity to make its presence known to the rest of the world.”

Can I be honest? I knew World Goth Day was a thing, but I didn’t know it was today until I heard Lori Majewski’s “Lust For Lists” show on SiriusXM yesterday. She played an hour of classic Goth music, leading off with Bauhaus’ “She’s In Parties” and concluding with The Cure’s “A Forest.” And yes, she played “This Corrosion.”

I’ve been around the Goth scene for most of my adult life, but I’ve never been deep into it. The Bauhaus t-shirt in the picture below is about as Goth as I ever dress, although my wardrobe has a preponderance of black and a nice sprinkling of purple. I’m too lazy to do makeup, I don’t like calling attention to myself, and the Texas climate isn’t very cooperative with clothes originally meant for Northwest Europe at the end of the Little Ice Age.

Still, I’ve always admired Goth fashion, at least when other people are wearing it. I love the books, the movies, and of course, the music. Rather than “growing out of it” – as so many Goths and Goth-adjacent folks are told they will or should do –  I settled into my own place in my late 30s and I’ve remained there. I expect to be here for the rest of my life.

For me, it started with vampires, and my fascination with vampires started with the original Dark Shadows. From there it went to the classic Universal horror movies of the 1930s and 1940s. It always included books. I still have a couple of horror anthologies I bought through the Scholastic book catalogues. I don’t remember where I got the hardback collection of Edgar Allan Poe stories (probably a Christmas present from my older brother) but I would have been 10 when I read it.

The music came later. In large part, that’s because Goth music didn’t begin until the late 1970s and early 1980s, evolving out of post-punk. The exact origins and the boundaries of Goth vs. related genres are beyond my expertise, and really, beyond my interest. I like what I like and I don’t care what you call it.

Finding beauty in the darkness

In 2019 I wrote The Future Will Not Be Easy But It Can Be Beautiful. It was inspired by a power outage, a dinner conversation, and The Sisters of Mercy’s “This Corrosion.” And some prophetic warnings about the future that have been quite accurate. Unfortunately. In closing, I said:

Goth music and culture in general, The Sisters of Mercy in particular, and “This Corrosion” especially – they don’t make things better. They don’t tell you things are going to get better. They’re honest – they admit things are bad and they’re going to stay bad for a long time.

And luxuriating in beauty always makes things better, even if only for a short while.

Is it any wonder I’ve been inundating myself with Goth culture over the past couple of years?

I discovered the German band Blutengel at the beginning of the pandemic and I’m still listening to them. I discovered MONO INC – another German band – earlier this year and I’m enjoying them too. Are they Goth? I don’t know. They don’t sound like Bauhaus, but I love their music and I enjoy their look.

Can I be honest about something else? I don’t like absinthe. I so wanted to like it. I’ve tried it in the traditional method with chilled water and sugar, I’ve tried different brands, and I just don’t like the taste. But I still watch Ligeia Resurrected fairly regularly. Adrienne’s absinthe reviews are excellent, and I appreciate her music reviews too. But I’m going to stick to drinking whisky or good red wine.

I’m still watching Penny Dreadful over and over again. It’s possibly the most visually impressive piece of Goth-related entertainment I’ve ever seen – and not just because it starred Eva Green in a role she was born to play. I’m watching every classic monster movie I can find on cable and Netflix.

Last fall I challenged myself to read and watch some new stuff. I completed the challenge and mostly enjoyed it. I even went back and picked up all my second choices (with the exception of Fort Salem). I need to do that again. As much as I enjoy it, it’s time to put Penny Dreadful back on the shelf and watch or read something new.

I don’t fit in

I’ve always been fascinated by the music, fashion, and entertainment surrounding the Goth scene. We like what we like, and that alone is enough.

But let’s face it: Goths don’t fit into mainstream society. I can get away with wearing all black to work from time to time, but if I did it all the time – much less if I wore more fanciful outfits – there would be some unpleasant conversations.

Even in khakis and a not-black polo shirt, I don’t fit in. Don’t misunderstand: I’m a straight white middle class cis man – I don’t face the difficulties that my LGBTQ and POC co-workers face. This isn’t about oppression. It’s about not fitting in. It’s about not belonging in places where you have to go and be in order to make a living and make your way through the world. It’s about knowing you don’t belong even as you mute and camouflage yourself so you can do what the mainstream society requires you to do, or else.

Goth is more than music, more than fashion, more than books and movies and TV shows. Goth is a mindset. It’s the ideas and feelings expressed in the music, fashion, and entertainment. [Some people disagree. So be it. I’m speaking only for myself and I’m not interested in negotiating the boundaries of Gothdom.]

I always wanted to be Dracula but I always felt like Frankenstein (the creature, not the doctor). So I like movies where the monsters win, because I see myself in the monsters. I like music that celebrates the dark, the haunting, the macabre. I like clothes that remind me “you belong here, not there.”

If you don’t fit into the mainstream, find where you do fit in. 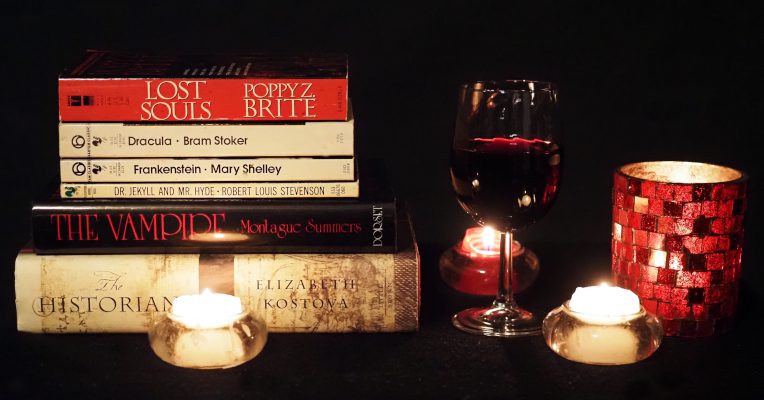 Goth culture in general and vampire culture in particular kept me sane – and alive – during a very bad time in my life. Once I found my path here as a Pagan, a Druid, and a polytheist, things got much better. This is my primary calling and my primary identity and I’m happy with it.

But I look at the direction the world is headed and I don’t like it. I don’t fit in. I don’t want to fit in.

The villagers are gathering with pitchforks and torches and they aren’t interested in listening to how people just want to be who and what they are without being harassed or shot or forced to carry a pregnancy they don’t want. The villagers want a good old fashioned witch burning and there are plenty of politicians who are willing to give it to them in exchange for money and votes.

I oppose them every way I can, but I can only do so much. It gets tiring. And demoralizing.

And we remember that sometimes, if they’re determined and careful and a little lucky, the monsters can win.