Polytheist Theology: the Names, Functions, and Relationships of the Gods

It’s time to get back to Conversations Under the Oaks, and I’m very happy that the latest round includes multiple questions on polytheist theology. For one thing, I’m happy that people are thinking about the Gods. We need not fully understand Them to worship Them (we can never fully understand Them – They’re too much more than us), but thinking about Them is another way to draw ourselves closer to Them.

Polytheists invented theology. Much of Greek Neoplatonism was preserved and is available to us. Some Neoplatonism made its way into Christianity – for better and for worse. There is a deep theological tradition in Hinduism. Our Northern and Northwestern European ancestors didn’t leave us a lot of theological literature, but enough remains that we know where to start looking for their Gods – and how to recognize Them when They call to us.

For all that many of us – myself included – would like to develop a systematic polytheist theology, we are often better off starting with small issues. The more narrowly a question is defined, the more likely it is we can come up with a clear and concise answer.

Then when we have enough “small answers” we can look for patterns and trends and start to develop big answers. We can build our polytheist theology from the bottom up rather than from the top down. Eventually we may develop our own systematic theology.

What follows are my answers to some theological questions. They are grounded in what I know of our ancestors’ polytheist beliefs and practices, in my own experiences, and in the experiences and thinking of my co-religionists. They are propositions, not doctrine or dogma. If you find errors or weaknesses in them, I encourage you to articulate your thoughts, either in the comments or on your own blog or other platform. If you’re in general agreement but have further thoughts, please do the same.

Robust and meaningful theology is never the product of any one person. It’s always the product of a group of people who understand that while we can never know everything about the Gods, we can know some things about Them. Dialogue among practitioners and thinkers is one of most effective ways to do this.

And now let’s look at some of our questions. I include questioners’ names when they give me explicit permission, otherwise the questions are anonymous.

Do the Gods have actual names?

Do the gods actually have names? Or are their use-names descriptions? I have my doubts. “Tyr” just means deity; “Freyr” and “Freyja” just mean Lord and Lady.

What is a name? What is the power of a name?

There’s an Egyptian story that says Ra created the universe, but then grew old and detached. Humanity suffered as a result. The people prayed to Isis, for they knew she loved them. Isis tried to persuade Ra to make things right, but he would not. So using her magic – and the saliva of Ra, from when he drooled on the ground in his feebleness – she created a poisonous snake. The snake bit Ra and caused him pain as he had never known.

Ra asked Isis to heal him, and she said “tell me your name, for he who speaks his own name will live.” Ra began to recount his many great deeds and his many epithets, but still the poison tormented him. And so at last Ra gave Isis his true name, which she used to heal him, and to heal the Earth.

Then Ra asked Isis to return his name to him, but Isis refused, saying “one day I may need to heal you again.” And so Isis retained the power that created the universe.

Yes, the Gods have names – true names. No, they’re not the names by which we know Them. Some of those names They told us, but many we gave to Them. Those names are sufficient for us to call to Them and to distinguish one from another – especially when we’re talking about Them amongst ourselves.

And that is enough.

Gods of functions, Gods of relationships

I am curious on your thoughts about the Gods’ modern interests. I’m an engineer and I work in the aerospace industry. I sometimes make offerings for job-related things. I have a close relationship with Brigid and I like to think her blacksmithing aspect can be carried to modern engineering, but I’ve been thinking about what Gods might take a particular interest in the space industry and high tech pursuits.

This is a difficult question for me to answer. In general, I prefer to approach Gods based on relationships rather than on function. While many deities were and are patrons of certain functions and forces – some are the personification of them – the Gods are whole persons. Like Karen, I’m an engineer. But I’m also a Druid, and a writer, and someone who enjoys tacos and wine and chocolate. I’m more than my job – more than any of my jobs.

Likewise, the Gods are more than Their functions. When I have a deep need, I go first to Cernunnos, and to Danu, and to the Morrigan. These are the Gods to whom I’m oathed – I have a formal, permanent relationship with Them. They are more likely to help me because They know me. Because I serve Them, They have an clear interest in my well-being.

Still, like us, many Gods have particular areas of interest and/or responsibility. It’s easy to see Gods of smithcraft (such as Brighid or Hephaestus) as Gods of more modern technology. It’s very easy to see Hermes as a God of the internet. We named the first missions to the moon after Apollo – I don’t think that was random chance. The new one is named for Artemis.

These things have a way of sorting themselves out. People pray to a God for help with something. If They respond, they’re likely to do it again – and to tell others about it. Those who hear about it will repeat the practice. Other times Gods take an interest in something and insert Themselves into a particular realm. Over time, we start to learn who to call on when we need help – and who to thank when things go well.

Meanwhile, keep praying to the Gods you already know.

The mystery of syncretism

Syncretism is when two or more deities merge and become a new deity. Perhaps the best known example of this is Serapis, the syncretism of Osiris and Apis. He was introduced in the Ptolemaic era of Egypt. His syncretism may have been politically motivated, but He was actively worshipped for 700 years.

And so a questioner asks:

What’s a good way for a polytheist to understand syncretism among Gods? Since they’re independent persons, how do they merge?

I have to admit, the multiplicity of the Gods – which includes syncretism – is a difficult concept for me to intuitively understand. Yet it was a reality in ancient times, and it’s a reality today. I understand it a little better now that I’ve encountered Cernunnos Denton.

Another reader pointed me to this very good essay titled Monolatry, Syncretism, and the Theology of Booze that uses alcoholic drinks to explain syncretism. All alcoholic drinks are a mixture of water, ethanol, and other components. The presence of alcohol is what makes them alcoholic. Beer, wine, and spirits are all essentially a mixture of water and ethanol, but they are very different drinks. Mix them together (such as combining beer and whiskey – a boilermaker) and you get something different still.

Divine syncretism combines the essence of one God with the essence of another God to create a third God who is something like the first two, but still a unique person. And because the Gods are divine, the first two are not diminished by Their contribution to the third.

There is still an element of mystery to syncretism. We don’t know exactly how it works, we just know that it does work because we experience the presence and blessings of the syncretic deity. But the “Theology of Booze” is the best explanation I’ve come across for understanding it intuitively.

The Old Gods and the New

This has nothing to do with the religions in Game of Thrones. But someone asked:

Are Gods eternal, outside time, existing but ancient inside our time, or are new Gods born? Have new Gods been born in the last thousand years? Not like an egregore, but a being independent of humans but which humans came to worship?

I see this as two questions. One I can answer with confidence. The other I can answer only with the vaguest of speculations.

New Gods are born at least occasionally. The stories of many different cultures speak of the parentage of certain deities, and of Their descendants. Isis is the daughter of Nut and Geb. She is the mother of Horus. There is no reason to believe that no longer happens, even if we don’t hear about it.

Beyond that, apotheosis is an established phenomenon. This is the process by which a human becomes a God. And since my preferred definition of a God is simply “the mightiest of spirits” it’s reasonable to assume that some spirits who were never human can also become divine.

I believe that all spirits are immortal – including human spirits. I have past life memories going back to the original Druids, but I have no memories of anything prior to that… much less prior to the evolution of the human species. I think at some point I was born for the first time.

Did Horus exist before Isis and Osiris? Was He waiting fully formed in some cosmic waiting room for his birth? I tend to think no.

Will Horus and Isis and Osiris – and you and me – still exist when this universe comes to an end? I tend to think yes.

Did any of the Gods – as we know Them – exist before the Big Bang? I don’t know, and I don’t know how we can know. This is why I sometimes say I’m both a polytheist and a pantheist.

Some things we know. Some things we don’t know, yet. And other things we can never know, not because we need better thinking or better technology, but because they’re beyond the capacity of our brilliant but limited human brains.

This is enough for now.

There are more good questions about the Gods that I’ll address in a future post. Meanwhile, let’s continue the conversation, either here or somewhere else. That’s how we learn and grow and build our contemporary polytheist theology. 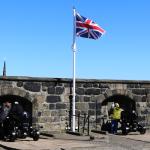 September 13, 2022
An American’s Thoughts on the Death of Queen Elizabeth
Next Post 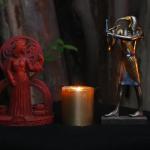